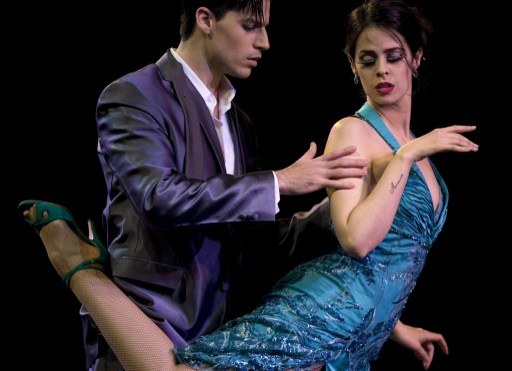 The Argentinian couple of Rocio Garcia Liendo (R) and Juan Pablo Bulich dances during the Stage Tango competition semifinal round of the Tango World Championship in Buenos Aires.

BUENOS AIRES - The sexy, sensual world of tango is experiencing a shake-up, as same-sex couples compete for the first time in the world championships in Argentina, where the dance was born.

The crowds in this traditionally conservative bastion of machismo culture, surprisingly, seem to embrace the change.

Enthusiastic cheers and massive applause rang out in a Buenos Aires exhibition hall for Juan Pablo Ramirez and Daniel Arroyo, as they danced to a 1940s classic.

"It takes two to tango," said Ramirez, elated after his successful performance, "but they don&39;t necessarily have to be different sexes."

Ramirez, a 34-year-old Argentine professional dancer, and Arroyo, 18, are among four same-sex couples -- including three male pairs and one female -- competing in the 11th annual world championship.

"There is a macho culture," Arroyo conceded. "But there are older people who appreciate us.

The dance partners said they are trying to excel in the wider world of tango, not just a gay subculture. "Our goal is for people to say, &39;what good dancing!&39;" Ramirez said.

Although same-sex couples are now seen as out of the ordinary in the milongas (dance halls) where tango is celebrated amid a cult of masculinity, the origins of the dance tell a different story.

Born in the brothels of the 19th century, the dance was at that time performed by pairs of men -- women were initially prohibited from participating in a dance considered prostitute-like, historians say.

Gustavo Mozzi, a musician and composer and director of the tango championship, said same-sex couples were never officially barred from the competition, though they never entered in the past.

This year&39;s entries show "there is a relaxation in the tango and milongas circuit. An opening," Mozzi said.

The development is perhaps another sign of Argentina&39;s increasingly open attitude on questions of gender, in a country that has been a pioneer in Latin America in legalising gay marriage and whose capital is well-known as gay-friendly.

Music swelled again and couples began striding and circling the stage in the deliberate tango motions as the audience cheered for Marlene Heyman and Lucia Christe.

Heyman, a dancing shoe saleswoman, and Christe, a violin professor, say they are not gay -- both have or had boyfriends -- but started dancing together for lack of partners at the milongas.

Nearby, Marcelo Siufe, a nurse, stands with his partner Manuel Mioni, a professional dancer, waiting to take the stage.

"Dance has no sex," Siufe said. "Before, men danced with each other. I could dance with my sister or my mother.

"Tango is passion and fantasy."