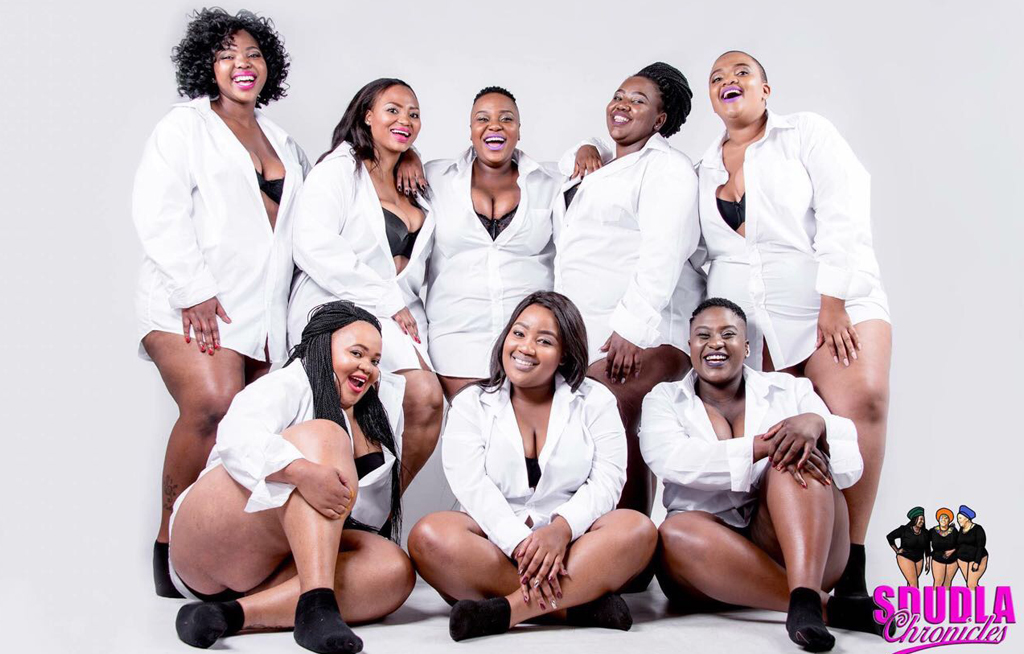 Sdudla Chronicles models posing at one of their body positive shoots.

JOHANNESBURG - Body shaming culture is rife across the globe, no one is really safe from being bullied about their weight, body shape or even stretch marks.

When Plus Size Bloggers come together this is what happens ------

The media has contributed to the way that society views beauty with thicker women made to feel less sexy.

Sdudla Chronicles founded in 2013 by Mabontle Maphosi is a movement that aims to normalise plus size bodies in the world whilst promoting body positivity.

Lerato Ruele a member of Sdudla Chronicles says though they get positive feedback from society, there are those who go out of their way to body shame the women and finds it sad that at times it’s the women who advocate women power ,that turn around and body shame other women.

“The bashing comes from both sexes. The saddest part is when it comes from women who advocate for women to stand together but turn around and ridicule women over their physique. Then you find men who are big but are struggling to lose weight that body shame big women. I am of the view that people who bash others are actually projecting what they feel about themselves on others," said Ruele.

The movement posts pictures of its members in sexy attire and bikini&39;s on its Facebook page to encourage big women to be more comfortable with their bodies and to let them know that it&39;s ok to be big and sexy.

I love her confidence! Diva FullFiguredRebel

"We live in a world that has adapted and conformed to what society has put out and everything that is not what is deemed correct by society is taboo. People&39;s reaction to big women is both positive and negative. Some are bashed on social media because they have embraced their bodies. People are used to the stigma that depicts big women as unsexy in certain items of clothing and seeing that makes them uncomfortable. That&39;s what we are trying to tell people, thats its really ok to be big and feel sexy," said Ruele.

Ruele feels that media is the biggest perpetuator when it comes to teaching self-hate and creating a negative image of big women, she believes the media fears a challenge.

Sdudla Chronicles Model Mpheletso.Women are starting to love their bodies maan this makes me so happy! Things we should be celebrating!!! pic.twitter.com/D3rdmNIx3S

"The media is a perpetuator of this ideology that beautiful is what we see in the media. They provide an unfair platform, and I assume it&39;s because people don&39;t like to challenge the norm so they allow it. There are hardly any positive things said about big women that are active.

She further says that society tells people to love themselves but want to dictate how they should do it.

"Society tells us to love ourselves, but this is how you should do it”. There is no sense in aspiring to look like someone else. If we all had to be the same, that&39;s exactly how we would be created in the beginning. Society is a group of people no one knows. People shouldn’t allow themselves to be controlled by abstracts", said Ruele.

She says that Sdudla Chronicles aims to normalise plus size bodies, as well as body positivity. The movement wants people to feel good about themselves irrespective of their weight. To take care and love the body you are already given and not to allow people to dictate how you should look.

"Many people are unable to separate their emotions and feelings away from people who lead their lives differently. Not everyone has aspirations to be skinny. I was born big, but I exercise and do go for regular visits to the Doctor. The public is very selective about what they want to support because we do hike to keep fit. Plus size movements are saying we are big, accept us as we are because one can be a prototype of what society wants but still be unhealthy," said Ruele.