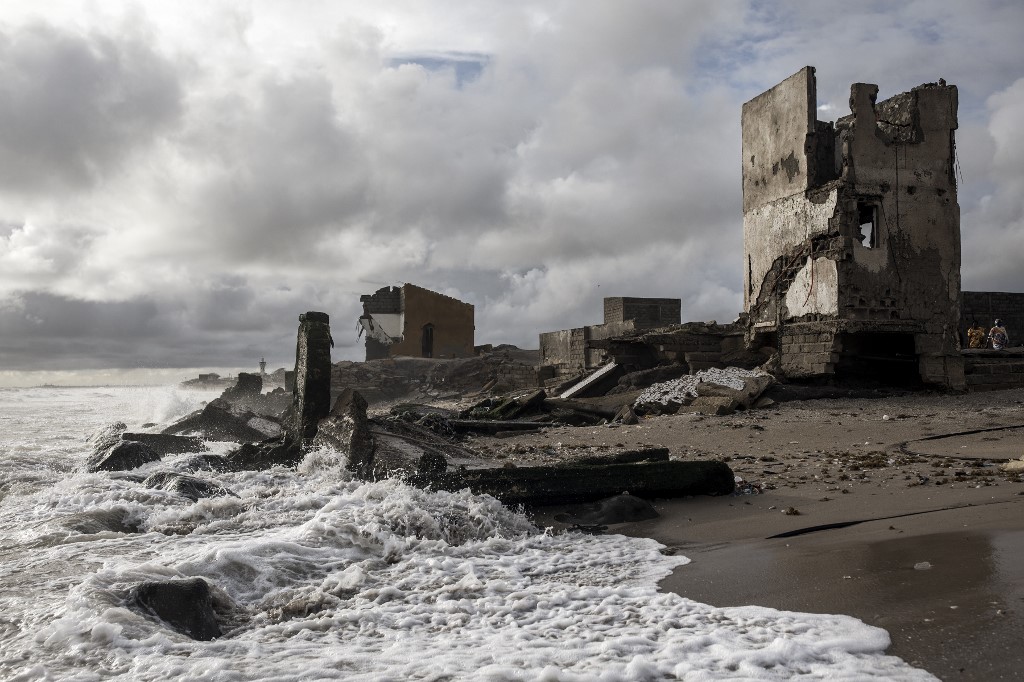 Women walk past destroyed buildings along the eroded coastline in Bargny on September 03, 2020. Fishing villages like Bargny have been fighting the rising seas for decades, hundreds of houses have been lost and families displaced. Through the months of July to September, peaking at the equinox, coastal towns like Bargny must brace for the worst, tides are at their highest, rising every year, storms are more frequent, battering the coastline which speeds up the erosion.

BARGNY, Senegal - Medza remembers the coastline of his native Senegalese town of Bargny as a place where he fished and played as a child before it became a festering rubbish dump.

The beach bordering the fishing settlement, about 30 kilometres south of the capital Dakar, is now permanently choked with plastic waste and rotten fish carcasses.

Wedged in by a motorway and industrial sites, Bargny typifies Senegal's jagged economic development -- as well as its seemingly endless struggle against pollution and trash.

The town borders one of West Africa's largest cement factories and a power plant, and a mineral port is being built nearby. But its 60,000 inhabitants have seen little in the way of beneficial development.

Residents tip out buckets of waste onto the beach for lack of disposal facilities. Local fishermen and industrial trawlers toss refuse overboard which washes back on the beach, according to Medza, whose real name is Medoune Ndoye.

"It shocks me. It can't continue like this because it's evil and it's shameful," Medza, a 29-year-old environmental activist, said.

For months, he and other local activists have been pushing to clean up the town.

On August 15 -- after raising money online for wheelbarrows, bags and shovels -- they spent three days clearing the beach.

But they were fighting a losing battle: after little over a week, the beach was freshly covered with plastic detritus and other waste.

"Everything is dirty again," Medza said, looking down at the scattered plastic bottles and pieces of old fish netting surrounding him.

"We feel as if our efforts are in vain".

Much of the coast of Senegal, a poor nation of some 16 million people, is polluted.

The government has made attempts to tackle the problem -- such as banning single-use plastics this year -- but the impact on the ground appears limited.

Bargny's trash problem is particularly severe. The town has a spotty garbage-collection service, but no rubbish bins or sewage system.

"We made very serious investments last year because we became aware of what existed here, it was really in an indescribable state," Diouf said.

The town hall is designating rubbish collection points across town, which it hopes will discourage people from dumping on the beach.

Pape Ndoye, an unemployed father in his fifties, pointed to a lack of infrastructure as a driver of pollution.

"People come from distant neighbourhoods to put their garbage on the beach," he said, just as a girl nearby emptied a bucket onto the sand.

Bins can do nothing against trash floating in from the sea, however.

And Bargny's pollution problems stretch further than the beach. A detritus-filled canal leading to the sea is so polluted that its water sometimes turns pink, or green.