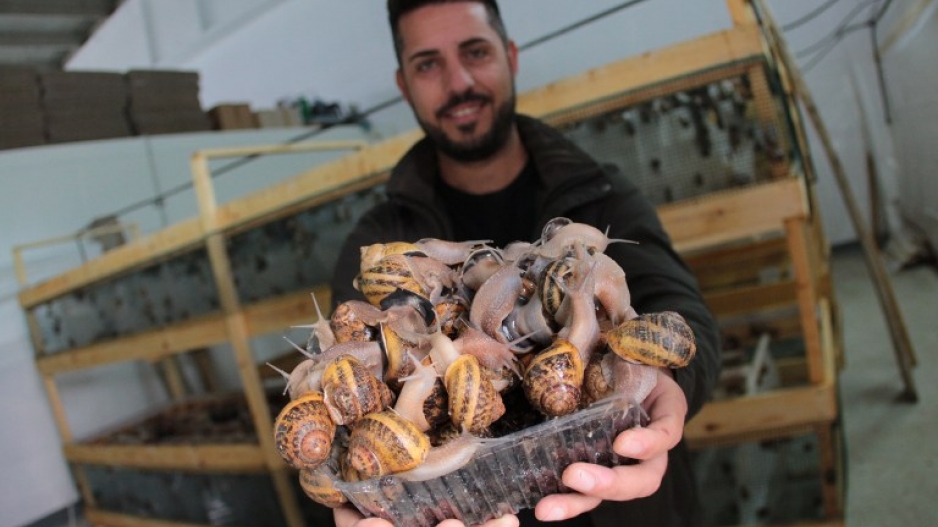 Davide Merlino, one of the owners of the snail farm La Lumaca Madonita which produces snail caviar, shows his snails on November 10, 2015 in Campofelice di Roccella near Palermo, Sicily.

CAMPOFELICE DI ROCELLA, Italy – It has an earthy taste with hints of grass and mushroom: snail caviar is a growing trend in Europe, the delicate white eggs sprinkled on everything from canap to beef dishes and beetroot.

But while the production cycles at other organic companies from Italy to France and Spain can last up to three years, one Sicilian start-up has cut the time down to eight months. Their secret? Cereals.

"We feed the baby snails a vet-approved diet of cereals, calcium and vitamins which means they grow much more quickly than they do eating leaves," Davide Merlino, one of the Lumaca Madonita company&39;s co-founders, told AFP.

Showing off the humid, temperature-controlled indoor breeding ground – netting-covered crates with boxes of earth inside where the snails lay their eggs – Merlino said they had rejected intensive farming for an eco-friendly process.

While traditional mamma-run trattorias may not yet serve the delicacy, Italians are no strangers to eating snails, and overloaded baskets of the creatures waving their tentacles are a common sight at markets, particularly in the south.

They have been cultivated since Roman times, with author and naturalist Pliny the Elder raving about snails fattened on donkey&39;s milk and wine. The delicacy became hugely popular among the wealthy, leading to the creation of the first snail farms in Pompeii.

Italians ate an estimated 40,000 tons of snails last year, ahead of France where annual consumption is around 30,000 tons. And while the latter relies heavily on imports, Italy grows almost half of its own needs, on farms from Piedmont in the north to central Lazio and Puglia and Sicily in the south.

Import numbers have dropped sharply over the past decade as increasing numbers of Italian farmers turned to this niche sector, one of the few to weather the economic crisis.

And snail caviar, which made a first unsuccessful appearance in the 1980s, is also winning over European taste buds.

Merlino and brothers Michele and Giuseppe Sansone set up the company outside Sicily&39;s Palermo 10 years ago, researching snail farms in Greece, Spain and France before coming up with their innovative breeding system.

"We now train others who want to follow in our footsteps, we&39;ve helped about 100 producers open in Italy so far," says Merlino, adding that others have come to learn from abroad, largely from Albania, Slovenia and Bulgaria.

"We&39;ve become the reference point across the country and beyond for this type of breeding system."

The mahogany-striped Aspersa Muller Madonita snails crawl over one another as they head to lay their eggs.

The breed is a Lumaca Madonita speciality: it was bred here from French and Sicilian species and is known not only for its dark colour but also its hard shell. The snails are eventually headed for the pot and shell strength matters.

With five breeds in all, the company currently has over two million snails on site in Campofelice di Roccella, and the mating season is a free-for-all: the molluscs are hermaphrodites with both male and female reproductive organs.

The breeds farmed here are ready to reproduce at around six months old and only lay once before being sold on.

The process from coupling to collecting the eggs and dispatching them to a laboratory which packages them for sale takes 50 days. The eggs are carefully selected, with only white and well-rounded ones making the cut.

And it&39;s not the only snail-based product on offer: the molluscs&39; mucus, said to regenerate and repair the skin, is made into a face cream, tapping into a booming market.

The popularity of snail slime as a beauty treatment has soared. The mucous was used from Ancient Greece to the Middle Ages to cure skin infections, stomach ulcers and as cough syrup – a remedy still found today in some parts of the world.