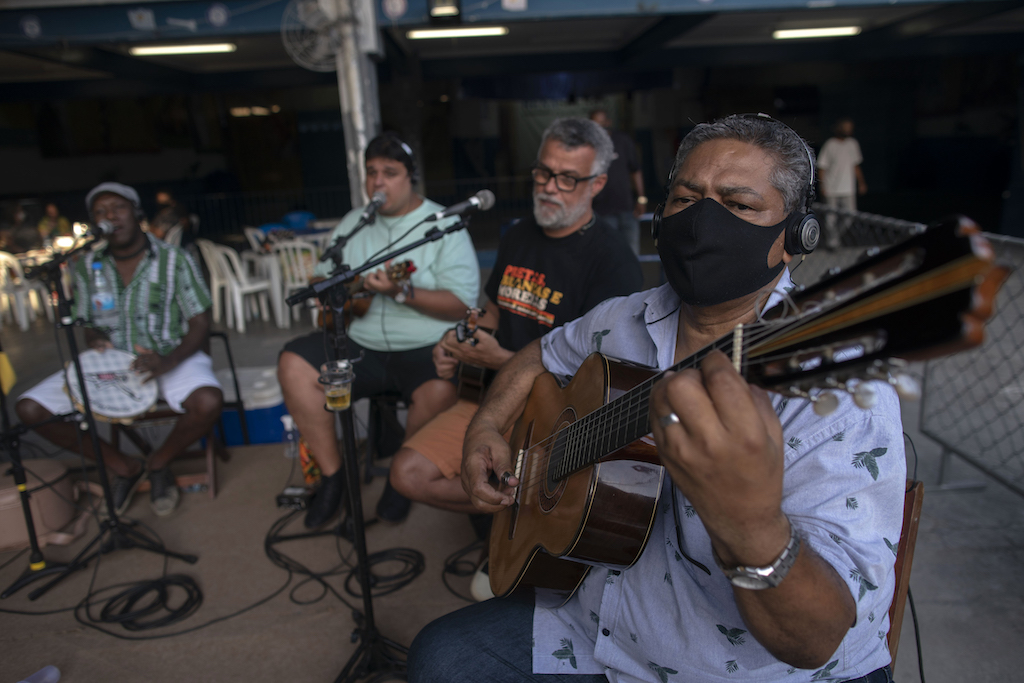 Musicians of the Samba do Trabalhador perform in a concert adapted to follow security measures to combat the spread of the new coronavirus (COVID-19) at the Renascenca club of the Andarai neighbourhood, in Rio de Janeiro. AFP/Mauro Pimentel

But the coronavirus pandemic has forced the performers who keep this tradition alive to adapt.

"We don't sit in a circle anymore. We play on a stage in front of the audience," said Moacyr Luz, founder of the Samba do Trabalhador (Worker's Samba).

Luz, a giant of Brazilian music who is up for a Latin Grammy this year, said playing samba without a crowd was like a footballer scoring a goal without celebrating.

"It doesn't feel natural. But at least the samba is flowing. We're living in a time of transformation, so everybody has to adapt," the grey-bearded songster told AFP.

Luz and his band are just coming off a seven-month hiatus during which their only shows were online. This month, they began playing in the flesh again -- with social distancing measures -- at Renascenca, a famous club on Rio's north side.

But the crush of people surrounding the band -- up to 1,500 of them in the past -- has given way to neatly separated plastic tables with small groups of guests.

Tickets are limited to about 300 per show and sell out fast online.

For true "cariocas," as Rio residents are known, the effect is therapeutic.

"Samba is part of Brazilian culture. It's associated with so many good things: It's the unity of a people, it's the continuation of a tradition. It brings immeasurable happiness," said fan Cristina Barreto.

"Being here is a matter of mental health. It feeds the soul and gives you strength to keep confronting all this."