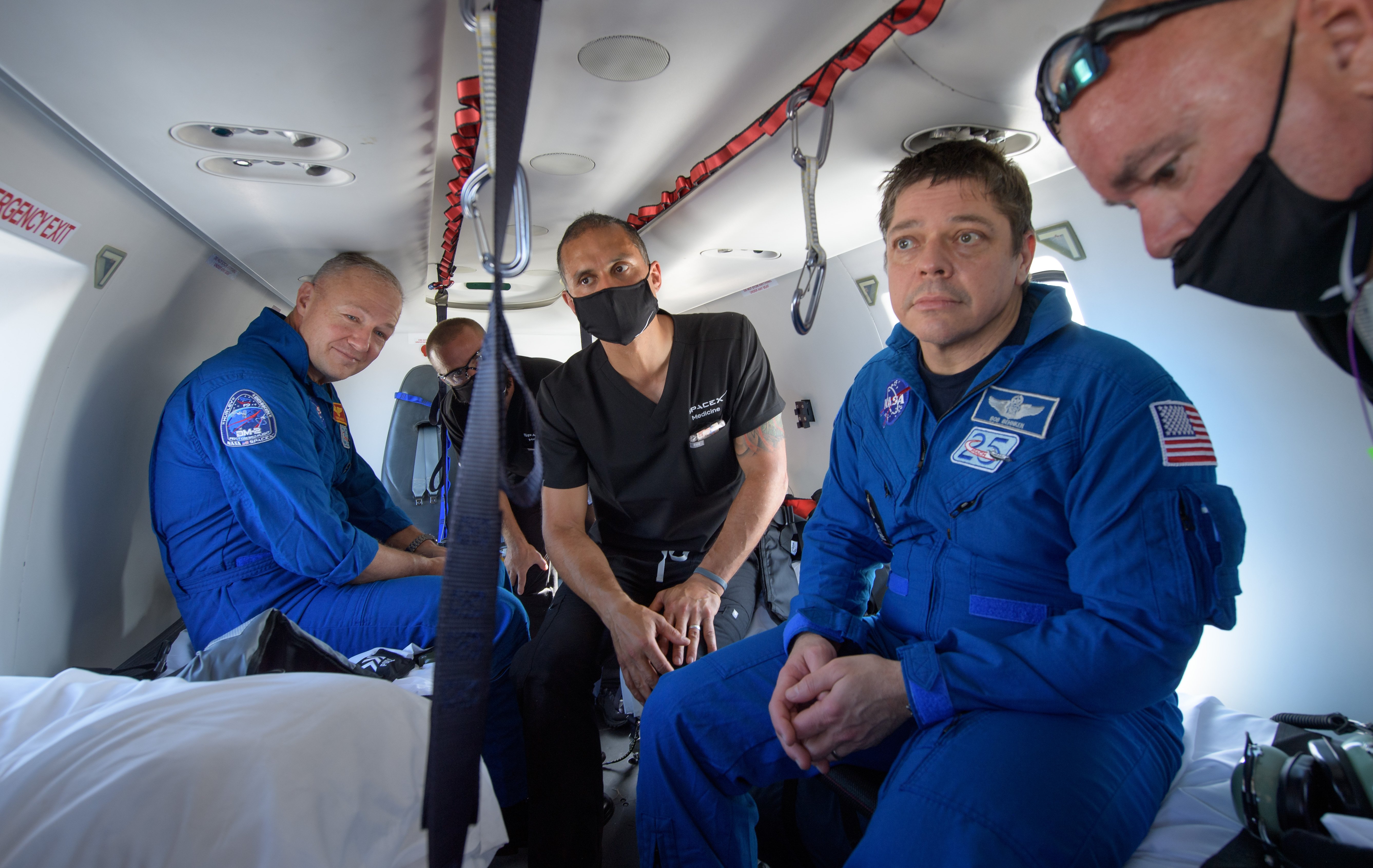 This handout photo released courtesy of NASA shows NASA astronauts Douglas Hurley (L), and Robert Behnken prepare to depart their helicopter at Naval Air Station Pensacola after the duo landed in their SpaceX Crew Dragon Endeavour spacecraft in the Gulf of Mexico off the coast of Pensacola, Florida on August 2, 2020. The Demo-2 test flight for NASA's Commercial Crew Programme is the first to deliver astronauts to the International Space Station and return them to Earth onboard a commercially built and operated spacecraft. Behnken and Hurley are returning after spending 64 days in space.

WASHINGTON, United States - America's first crewed spaceship to fly to the International Space Station in nearly a decade returned safely to Earth on Sunday, splashing down in the Gulf of Mexico.

The successful mission, carried out jointly by SpaceX and NASA, demonstrated that the United States has the capacity once more to send its astronauts to space and bring them back.

The SpaceX Crew Dragon Endeavour splashed into the water off Pensacola, Florida at 2:48 pm (1848 GMT), trailed by its four main parachutes.

It was the first water landing for a crewed US spaceship since the 1975 Apollo-Soyuz mission.

"It's truly our honor and privilege," said pilot Doug Hurley, who was joined on the mission by commander Bob Behnken.

"On behalf of the NASA and SpaceX teams, welcome back to planet Earth and thanks for flying SpaceX," replied SpaceX's Mike Heiman, to laughter in the control room.

A flotilla of civilian boats swarmed the landing zone as a recovery ship sped to the scorched capsule and hoisted it aboard with its crane.

The hatch opening was briefly delayed as a team worked to stop a leak of rocket fuel vapor, but around an hour after splashdown, the astronauts exited the capsule and headed for shore on a helicopter.

They were reunited with their families in Houston, where they walked off a plane - in apparently good physical shape and upbeat spirits - at a military base.

Addressing a socially distanced welcome ceremony in a hangar, Behnken, a veteran of the Space Shuttle program, praised the SpaceX team behind the successful mission.

"There's something special about having that capability to launch and bring your own astronauts home," he said.

"I'm not very religious but I prayed for this one."

President Donald Trump - who had travelled to Florida for the capsule's launch two months ago - hailed its safe return.

"Thank you to all!" he tweeted. "Great to have NASA Astronauts return to Earth after very successful two month mission."

The United States has had to rely on Russia for rides to space since the last Space Shuttle flew in 2011.

The mission is also a huge win for Musk's SpaceX, which was founded in only 2002 but has leap-frogged its way past Boeing, its main competitor in the commercial space race.

The US has paid the two companies a total of about $7 billion for their "space taxi" contracts, though aerospace giant Boeing's efforts have badly floundered.

First, it jettisoned its "trunk" that contains its power, heat and other systems, which burned up in the atmosphere.

Endeavour then fired its thrusters to maneuver itself into the proper orbit and trajectory for splashdown.

It deployed two sets of parachutes on its descent, bringing its speed down to a mere 15 mph as it hit the Gulf of Mexico.

Behnken and Hurley began their day with a surprise wake-up call from their sons.

"Don't worry you can sleep in tomorrow. Hurry home so we can go get my dog!" said Theo, Behnken's six-year-old son.

The astronauts brought a toy dinosaur, which they had used as their zero-g indicator, back to Earth for their boys. The Endeavour's return marks only the beginning for the Crew Dragon as SpaceX and NASA look ahead to future missions.

Endeavour will now undergo a six-week inspection to certify the vessel as worthy of future low-Earth orbit missions.

Take-off is set for late September, and the crew are due to spend six months on the space station.