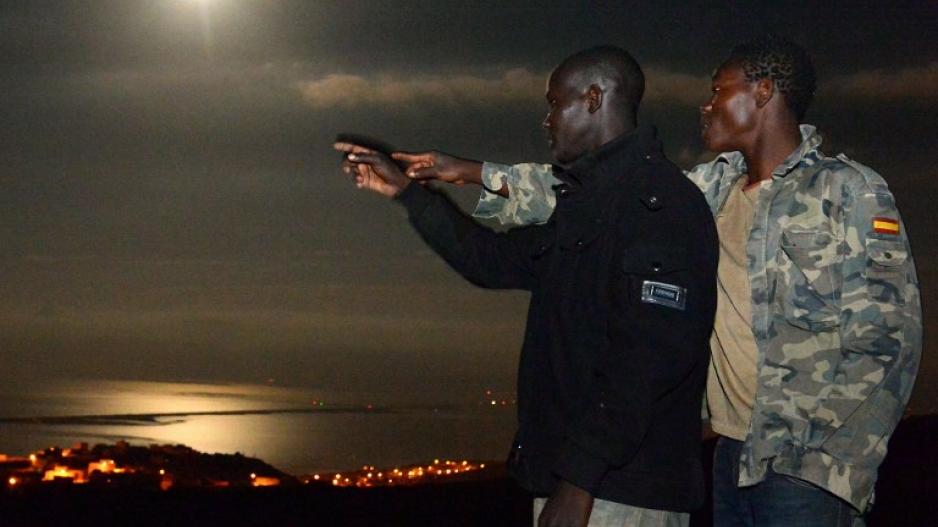 Migrants point at the frontier with Melilla, a Spanish-governed territory bordering northern Morocco. They were the latest in a wave of thousands of impoverished migrants trying to reach Spain, with officials saying their numbers have swelled.

RABAT - A group of Moroccan NGOs has called on Spain and Morocco to end "widespread violence" against illegal immigrants, in a letter to Spain&39;s ambassador, after 11 people drowned trying to cross their common border.

"We are deeply concerned to see the close cooperation between Spain and Morocco on border control today resulting in... widespread violence against migrants and security practices outside of any legal framework," the five NGOs said in the open letter seen by AFP on Friday.

"We ask you to intervene urgently with your government to put an end to these practices," said the group, which included the Moroccan branch of Caritas and migrant support group GADEM.

Their call comes one week after at least 11 sub-Saharan Africans drowned as hundreds tried to reach the Spanish territory of Ceuta by swimming from a beach in neighbouring Morocco.

The incident has fuelled international concerns about the violent treatment of illegal immigrants by Spanish and Moroccan security forces amid reports -- supported by the Moroccan NGOs -- that Spain&39;s civil guards fired rubber-coated bullets at those attempting the crossing on February 6.

Spanish authorities say the civil guards in Ceuta did use rubber bullets to ward off the migrants but that they fired them in the air and did not target anyone directly.

"Last Friday, we received several dozen people who were part of the group that tried to enter Ceuta on the morning of February 6," the letter by the Moroccan NGOs said.

"Those who went by sea witnessed Spanish security forces firing rubber bullets and tear gas at the boats and the people themselves, even as they were calling for help."

Morocco, under pressure from Spain, is trying to stem a rising stream of sub-Saharan migrants who enter the country illegally and head to its northern shores in a desperate quest to cross the Mediterranean.

Ceuta and Melilla, Spain&39;s other enclave bordering Morocco, have the EU&39;s only land borders with Africa and are seen as stepping stones to mainland Europe.

In early January, the Moroccan government launched an operation to "regularise" the papers of the estimated 25,000 illegal immigrants on its soil and grant them residency permits, in the face of allegations that several had died at the hands of police in 2013.

Government spokesman Mustapha Khlafi hit back at criticism earlier this week from Human Rights Watch, which charged that the security forces "commonly beat, otherwise abuse and sometimes steal" from migrants.

He stressed that since the country&39;s new migration policy came into force there had been no deportations to Algeria, and insisted the Moroccan authorities were ready to conduct inquiries into allegations of violence against illegal immigrants.