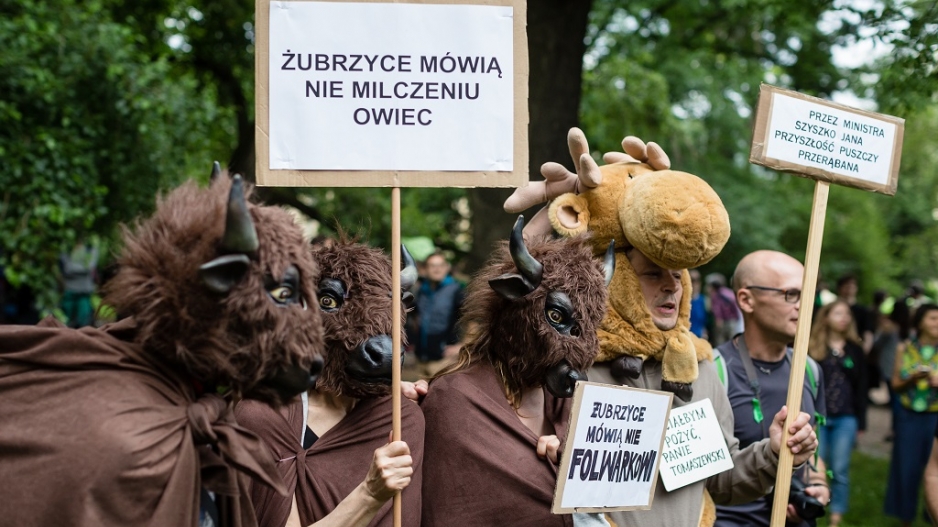 People dressed as european bisons take part in a demonstration against massive logging in Bialowieza primeval forest (Puszcza), in Warsaw, Poland, on June 24, 2017.

POLAND – Thousands demonstrated in Warsaw on Saturday demanding an end to large-scale logging in Poland's ancient Bialowieza forest, just days after the enviroment minister called for it to be stripped of protected UNESCO status.

Bialowieza, straddling Poland's eastern border with Belarus, includes one of the largest surviving parts of the primeval forest that covered the European plain 10,000 years ago.

Poland's right-wing government began logging in May last year, saying it was clearing dead trees to contain damage caused by a spruce bark beetle infestation, and insisting the policy was entirely legal.

But scientists, ecologists and the EU protested the move in the UNESCO World Heritage site and activists allege that it is being used as a cover for the commercial logging of protected old-growth forests.

"You just need to look at satellite photos to see how quickly Europe's last primeval forest is being transformed into a tree plantation. We want that to stop," Robert Cyglicki, the director of Greenpeace Polska, said Saturday as thousands of protesters marched through the heart of the Polish capital.

"I've come with, and for, my six-month-old son, to preserve Bialowieza for him, to stop this barbaric logging," Olga Matuszewska, a 37-year-old filmmaker, told AFP as she pushed a pram with her son, Stefan.

"We need trees for clean air; the lumber's not worth it , it's not worth turning everything into money."

Activists began chaining themselves to logging equipment in Bialowieza in May in a bid to halt the mass felling of trees.

In late April, the European Commission gave Polish authorities a "final warning" to address its concerns about the forest or face being summoned by the EU's top court.

The EU is also concerned the logging will cause irreparable loss of biodiversity in the woodland that belongs to the EU's Natura 2000 network of protected areas.

UNESCO has also expressed concern over the logging.

But Poland's Environment Minister Jan Szyszko on Wednesday called for Bialowieza to be stripped of UNESCO's natural heritage status, which bans any human intervention.

Insisting that Bialowieza was "granted UNESCO natural heritage status illegally," Szyszko also said that "a complaint had been lodged with the prosecutor's office" regarding the matter.

The forest gained the coveted "natural heritage" label in 2011.

Szyszko also backed a separate law passed in January allowing homeowners to cut down trees on their property without requesting permission.

As many as three million trees could have been felled across Poland under the new law Zbigniew Karaczun, a researcher at Warsaw University of Life Sciences, told the Saturday edition of the liberal Gazeta Wyborcza daily.