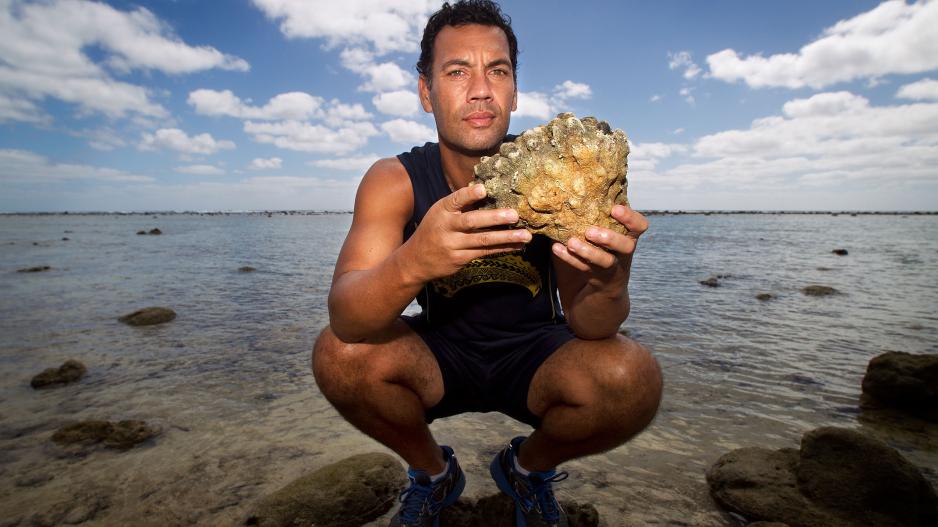 Former international rugby league player turned environmentalist Kevin Iro holds a piece of dead coral on a beach in Avarua, on Rarotonga, the largest island in the Cook Islands.

WELLINGTON, New Zealand - The Cook Islands has created one of the world's largest marine sanctuaries, protecting a vast swathe of the Pacific Ocean more than three times the size of France.

Environmentalist Kevin Iro, who first proposed the idea more than five years ago, said it was a landmark achievement that would help preserve the ocean for future generations.

"It's a historic time, particularly because everyone supported it, including our traditional leaders who spearheaded the whole thing," he told AFP.

The Cook Islands has a population of just 10,000 and its 15 islands have a combined landmass of 236km², barely the size of Washington DC.

But its isolated position in the Pacific, about halfway between New Zealand and Hawaii with no near neighbours, means it has a huge maritime territory.

Iro said Cook Islanders have an affinity with the ocean and viewed it as sacred but overfishing and pollution had damaged the marine environment, including the coral reefs that once ringed all the islands.

READ: Endangered vaquita marina porpoise could be extinct by 2018: WWF

He said the marine reserve, known as Marae Moana, would give the environment a chance to heal, allowing the islanders to protect their legacy.

"When I moved back here (from New Zealand) about 16 years ago I saw what was happening to the lagoons and reefs and really wanted to protect them for my kids," he said.

"I want them to have the same experience I did as a boy growing up."

The idea is not to ban commercial fishing or mineral exploration outright, but to ensure it is carried out in a sustainable manner.

However, there will be a core no-fishing zone totaling about 320,000km², extending 50 nautical miles from the coastline of each island.

"Together we had a vision to turn our little country into the cleanest and greenest tourism destination in the whole wide world," the Cook Islands News quoted him as telling Parliament.

"We not only recognise that the ocean brings us revenue in terms of fishery and tourism and potentially seabed minerals – it also provides us with clean air, clean water, and clean food to nourish and sustain us."

Puna's office did not immediately respond to a request for comment.