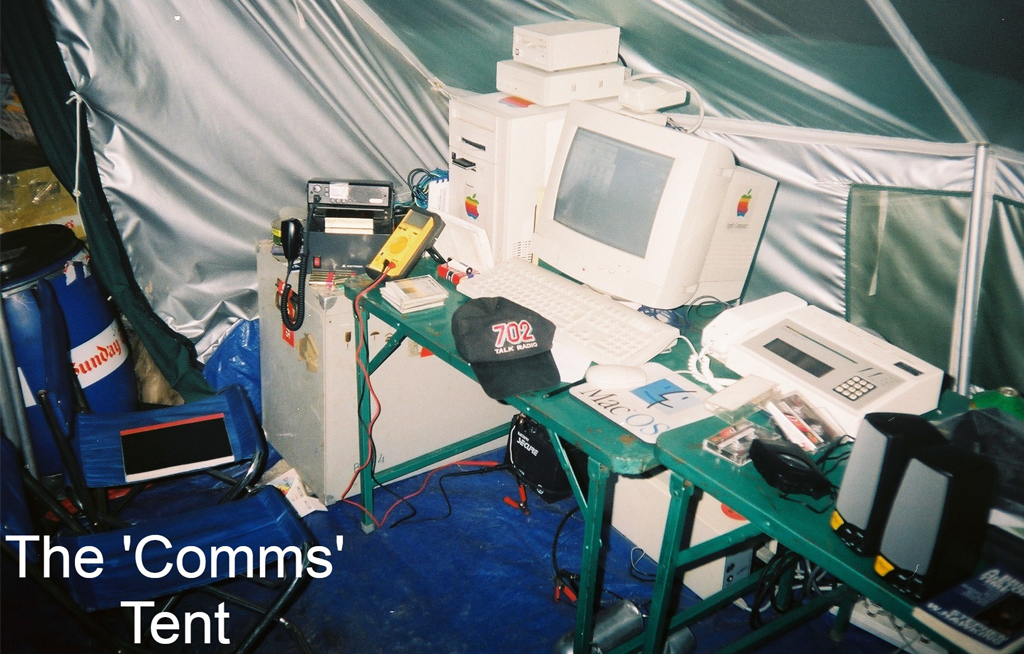 The "Comms Tent" on Everest

* In 1996, Patrick Conroy was sent to Nepal to report on South Africa&39;s first Everest expedition. Twenty years later he reflects on this memorable assignment.

There I am, sniveling behind my rock. Ian Woodall is battling exhaustion at Camp 4. He has barely slept in two days and is desperately trying to stay awake and focused on the mountain should Bruce Herrod return.

Then his oxygen runs out.

He reaches for one of the two extra bottles Cathy had found on the South Col. He attempts to screw his regulator into it but the nozzle doesn’t fit. He tries several times but without success.

He grabs the second bottle and tries to connect to it too, but again his regulator won’t fit. Ian is holding the canister in both hands. He is starting to feel the effects of reduced oxygen in his body but cannot unlock the life-saving treasure inside the orange cylinder.

Ian grabs the radio and sends a frantic message to Base Camp. He tells Philip that until now nobody had realised that he and Cathy had different regulator fittings. He cannot access the vital oxygen.

He must descend before the lack of oxygen and exhaustion overcome him. With no sign of Bruce he could die on the Col waiting for a man who was never coming down. Philip agrees and urges his brother to get climbing immediately. It was the correct decision.

Cathy hears the radio call in Camp 2 and calls Ian to warn him about the bad conditions on the Lhotse face. She is very worried about him, and moves into the tent at Camp 2 usually reserved for Ian and Bruce.

By now it had also become clear to me what Ian had meant in his message that “No further communication would be given”.

Until he was back in Base Camp he did not want me to file any more news reports to 702. There would be a news blackout.

The temporary relief of not having to constantly feed the insatiable news beast was like being gifted a beach holiday. Journalistic duty gave way to a break in the ceaseless madness of the past month.

702 did not challenge him either. I was allowed to contact the newsroom to assure them of my well being but live crossing and interviews were not permitted.

I suspect Ian knew that Bruce’s death would bring controversy and reignite questions about his leadership style and decisions on the mountain. Perhaps he wanted to control the message. I would have to wait for him to get back down into camp to find out.

Back in South Africa 702 filled the airwaves with interviews from some of the world’s leading expedition leaders, friends and family of those on the mountain, including my own father.

I pause here for a moment because it is unusual to hear your own parent talk about you in the third person, especially when you only hear it for the first time 20 years later. It is also particularly poignant when your parent is dead.

In writing down these experiences I listened to many tapes of the 702 coverage for the first time. They had been dumped into a cardboard box and shuffled around over the years without ever being reopened.

In 1996 I knew my dad had been interviewed on air, and at the time I flew into a rage. I wanted him to have nothing to do with the broadcasts. My dad and I had a troubled relationship and I had distanced him from what was happening in my life.

My father, Paddy Conroy, was born in Ireland in 1942. By global standards their family was poor and sought a better life in America in the 1950’s. But the American dream did not materialise for the Conroys, and my dad was soon in charge of the logistics of moving the family back to Ireland. He was 17.

A twist of fate, in the form of a job offer, to work in South Africa on a short term basis led to him meet my mother. He fell in love with a woman and a country at the same time, and he never left.

In 1996 he and I were not particularly close. My parent’s marriage had ended a few years before, and I was filled with bitterness and resentment towards him. He was, in my view, a hyper critical parent who only dished out disapproval and criticism. It was a relationship of tolerance destined towards total rejection.

Then in the year 2000 I met my future wife, Ilona Conroy. She came from a close family and placed a huge emphasis on family life. Ironically my father had just moved into a house a few blocks from where her parents lived.

Begrudgingly one dinner invitation turned into another and then another. Ilona and my dad hit it off from day one. Her parents and he became friends and slowly the poison ebbed away.

Then in 2005 fate intervened. Ilona fell pregnant unexpectedly. We were living together but were not married. The little boy who arrived in early 2006 was the secret ingredient to bring my dad and I back into an irreversible bond. Grandfather and grandson were instant soul-mates.

The years that followed Dylan’s birth have been among the happiest of my life. I was gifted a son and re-gifted a father.

And so, when just a few days ago I listened to my dad speak to John Robbie in 1996 I was filled with complete and utter shame. Utter shame.

Here was a voice of a man, speaking 20 years in the past, expressing his deep concern for me.

Looking back I am reminded of a quote I once read. It went something like this:

“Most parents don’t want your love, they want your forgiveness”.

Now, it makes sense. I will be eternally grateful we found each other again.

***
Also in South Africa was journalist Duncan Elliott, the reporter from Out There Magazine that I had met in Namche Bazaar and sang the “Namche Blues” with over a few high altitude beers.

Duncan had just arrived back in South Africa. He had come up to Base Camp after the killer storm on May 11th and 12th and had bivouacked on the glacier.

He and I spent a few hours talking during this time. We’d sit on a rock a distance from Base Camp and swop notes. He was a climber as well and knew much more about the history of Everest, and of mountaineering in general, than I did.

I liked Duncan and I thought it was a pity he was not welcome in our camp because of his loose affiliation with the owners of the Sunday Times. In normal circumstances I could see us being good friends.

Duncan’s descriptions of Everest and the situations that unfolded were pure poetry. Combined with the masterful interviewing techniques of John Robbie the audio clips below are illuminating. However, they are also sadly ironic. Duncan Elliottt was to die in a climbing accident in Peru a few years later. I was devastated to hear of his death. He was 35.

Next John Robbie asks one of the biggest questions of the 1996 expedition. Why did Ian Woodall not force Bruce Herrod down the mountain? Looking back the question is legitimate, but naive.

Ian did in fact urge Bruce to turn around. I was an “ear-witness” to radio calls confirming this. Yet other than the power of influence there was nothing Ian could do when faced with a defiant Bruce.

Bruce Herrod was not a fickle soul. He was physically and mentally powerful. He was doing an acceptable time and had a legitimate argument to continue.

I will touch on this later in this series, and it is a critical point, individual decisions are what matter most. You cannot be pampered up or down a mountain. You must survive on your own.

Duncan’s reply to John Robbie is elegantly simple and true.

Next John asks about the allure of the summit. What is it that draws climbers to the top?

Duncan Elliott had been refused access to the South African Base Camp because the magazine he worked for was owned by the same company as the Sunday Times. Ian was convinced that the newspaper had a vendetta against him and so Elliott was allowed one night in camp with food and then had to leave.

I think it was petty of Ian not to shake Duncan’s hand. Elliott was a gentleman and honest. I believe Woodall missed a trick in not welcoming him into camp. He played the man and not the ball.

It is also bittersweet to hear Duncan’s voice so long after his death. I feel I was robbed of a friendship.

Day 27: To Dare to Touch the Heavens