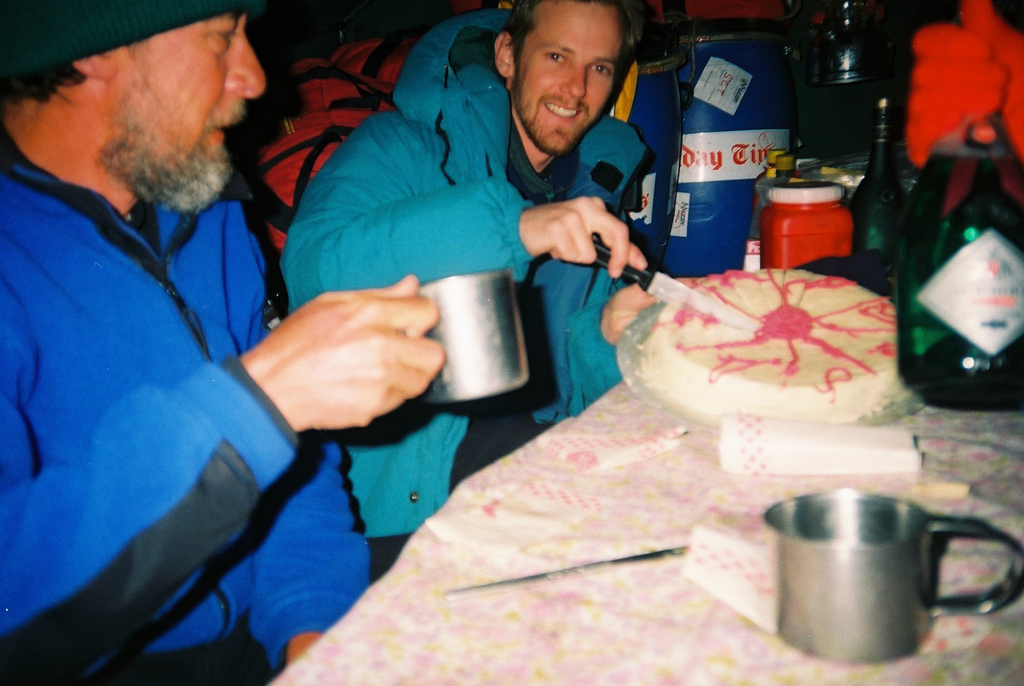 28 May 1996 - Patrick Conroy (C) cuts a cake at a special meal put together by the Everest Sherpa and camp staff. They'd baked a cake to celebrate the summit achievement, and with pink icing they had written "Everest Hippy Nice Samit".

* In 1996, Patrick Conroy was sent to Nepal to report on South Africa&39;s first Everest expedition. Twenty years later he reflects on this memorable assignment.

Ian, Cathy and the Sherpa arrived in camp the day before looking thoroughly depleted of energy and emotion.

There was an uncomfortable silence at first. Above our camp the South African flag had been lowered to half-mast in honour of our one missing comrade.

As it flapped in the wind the flag seemed to send out a signal to all around us that death had come to this expedition too.

The few people left in Base Camp tended to keep their distance, perhaps feeling too awkward to come and say anything. Others passed on their way down the mountain in silence, glancing in the opposite direction as if something on the peaks had caught their attention just at that moment.

I took a few photographs of a trail of heavily laden yaks leaving camp. Another shows the glacier where once there had been a small city of tents now empty.

Deshun had not been herself for several days. She was taking longer to process the loss of Bruce and was unusually quiet and lost in her own thoughts.

It took several hours for us to be accustomed to one another as a group. It was the Sherpa and camp staff who really made a difference though.

They put on a special dinner of ‘hill food’ and baked a cake to celebrate the summit achievement. In pink icing they had written "Everest Hippy Nice Samit". The spelling was awful but the gesture lifted our moods and for the first time we laughed as a group.

Between the troughs of sadness came collective peaks of celebration that the team had actually done it. All six climbers had ‘topped out’.

For a few hours we allowed ourselves a respite from the outside world and ate and drank.

But the outside world was not going to stay away forever.

Now that Ian was back in Camp I wanted to discuss his decision to enforce a news black-out. It was an uncomfortable moment to ask someone to talk publicly about the death of a friend and to defend the decisions he had made.

Both Ian and Cathy are not outwardly emotional people, and can come across as cool and distant. They had a tight grip on their emotions, giving very little away about the deep pain they were going through.

“Ian,” I pleaded “South Africa is desperate for news.”

“Patrick, I appreciate that as a journalist you want news, but we were the ones up there, and we will talk about it when we are good and ready, and not one minute before. I don’t know about Cathy but I am not ready yet.”

She told Ian she was prepared to do an interview on 702, specifically the morning show with John Robbie and Dan Moyane.

I sat behind Cathy in the comms tent as she prepared to talk to them. She came across as reserved, if not a bit cold. What the listeners could not see though was the grief in her eyes.

John Robbie: “So it was just an unfortunate tragedy?”

Cathy O’Dowd: “That’s what we feel. It’s a risky sport, and those are the risks we have all thought through and accepted before we take on a challenge. We believe it was an unfortunate accident, one of the risks inherent in the challenge he undertook.”

I wanted to tell Cathy she should spill her heart out and share the grief she was feeling. This was too matter-of-fact and the listeners would misinterpret her imprisoned emotions for indifference, which it clearly wasn’t.

Back home the controversy raged. Why wasn’t Bruce ordered down? Why was he alone? Why wasn’t he roped to a Sherpa?

These were all valid questions that had answers and context. But Ian and Cathy, battling with their own feelings, miscalculated public sentiment. To some they were heroes and to others villains with ice in their veins.

Ian did not help reinforce a positive public image.

The next day Ian would also go on the radio. In South Africa the Mountain Club had publicly criticised his leadership and blamed him for Herrod’s death.
Ian’s reply did not win over any critics.

“The Mountain Club of South Africa,” he told 702 “couldn’t organise a piss-up in a brewery”.

After the interview Ian continued to rage about their statement in the comms tent.

“If they’re such great mountaineers why aren’t they here climbing the mountain them bloody selves? Because going any higher than Table Mountain scares the sh*t out of them. That’s why. Damned armchair critics!”

Muttering to himself Ian left the tent in a foul mood.

I was torn. And I was embedded in the team. Emotional bonds had formed and it was incredibly difficult to step back out of the circle.

Years later in the Second Gulf War the term “embedded journalist” would be a global phrase as reporters joined military units on the frontlines in Iraq.

There was international condemnation of the reporting that came out of the battle front as journalists started to refer to themselves and the soldiers around them as “us” and “we”.

There was no arms-length objectivity that one would usually expect.

In comparison the independent reporters who refused to join military units criss-crossed the battle field on their own. Many were killed, mistaken for the enemy.

The ‘independents’ were also more hostile towards the military forces and more critical, resulting in them being shunned by the combat forces and not always having the insider’s insights.

In 1996 this was my position. I was embedded, I had access to the climbers thinking, radio transmissions and even their companionship.

As a result my reports were overly defensive of the team, trying too hard to explain that you cannot be roped to another climber on the South East Ridge. And that mountaineers must climb between the South summit and summit themselves, and then get back.

Of course, this is true. If you can’t do it yourself, then you will die. And if anyone tries to help you they run the risk of dying too. That is exactly what happened to Rob Hall when Doug Hansen collapsed and was unable to cross the ridge. It is the same reason Peter Boardman did not return to look for Mick Burke in 1975.

But I failed to interrogate Ian’s leadership style and climbing philosophy in my journalism. I lacked the maturity of a seasoned reporter to extricate the painful truths and nuances at play.

Ian Woodall was a complex character that the audience needed to understand, warts and all. I needed to reveal what lay beneath the steely determination and quick temper.

If he had kicked me out of Base Camp for doing so then I should have been prepared to walk out alone.

With hindsight I don’t he actually would have done that. I just didn’t know how to do it. So my reporting remained superficial.

Revisiting the memories of Everest I’m not sure I will ever fully understand either Ian or Cathy and what drove them on the mountain. Sadly I never got to know Bruce Herrod any better.

I did learn,too late though, that on an adventure such as this one the missed opportunities will haunt you for a long time. You don’t get a second chance to photograph a climber or do an in-depth interview when they are ‘missing presumed dead’ or gripped by grief and loss.

I was out of my depth.

I took some solace years later from my karate instructor who used to tell us before a difficult fight or championship:

“Experience is something you get after you need it”.

I was to reflect on this for many years afterwards.