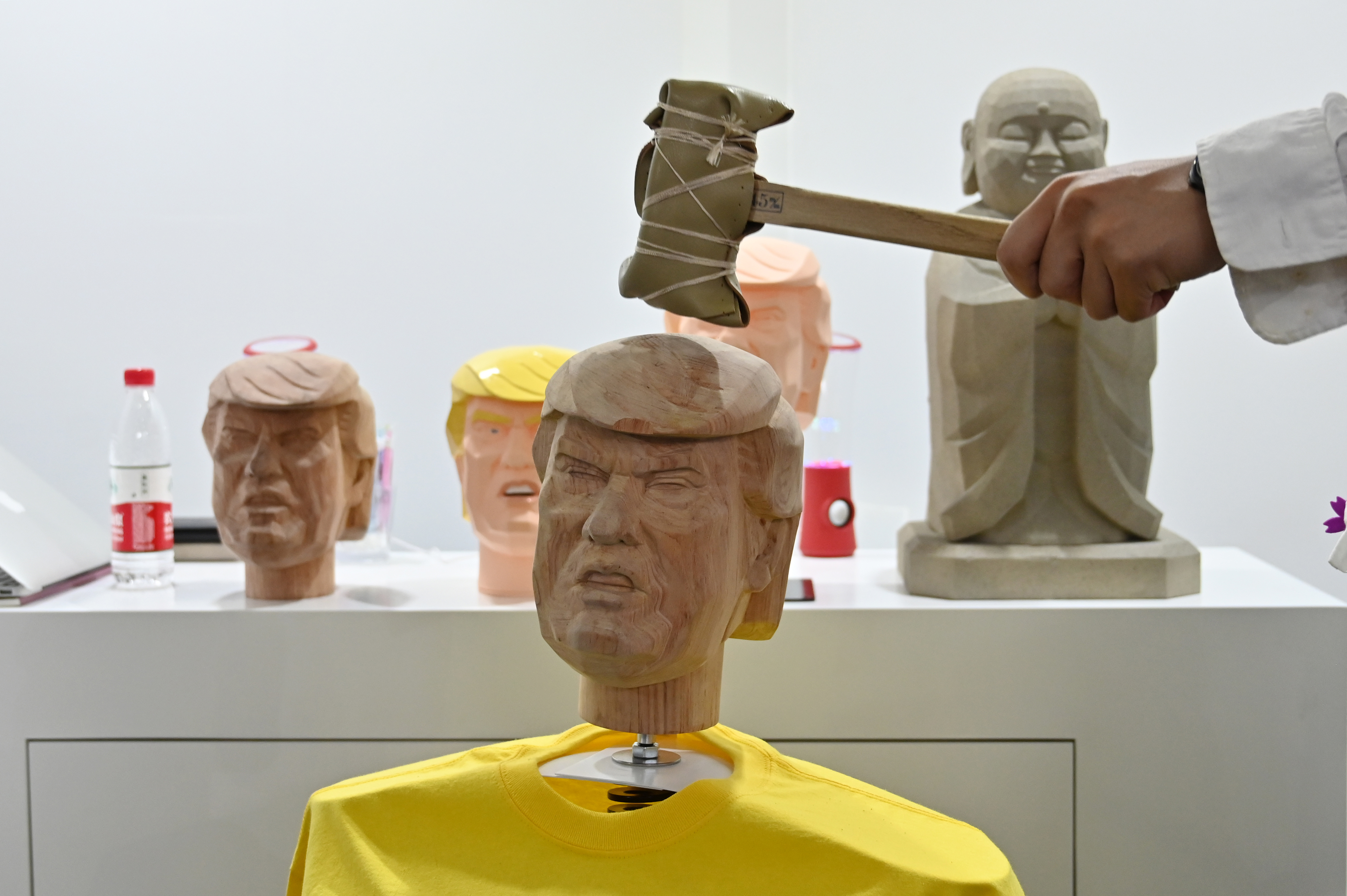 A man hits a bobble head in the likeness of US President Donald Trump as part of a "stress relief station" from a Japanese company during the Consumer Electronics Show, Ces Asia 2019 in Shanghai on June 11, 2019.

SHANGHAI, China - It might be the most low-tech item at a Shanghai consumer electronics fair, but a bash-able Donald Trump is eliciting perhaps the most physical reaction from visitors amid his tech-and-tariff war with China.

A kiosk at the centre of the Consumer Electronics Show Asia (CES Asia) bills itself as a "stress-relief" station where you can smash a life-sized bobble-head likeness of the US president with a hammer.

The not-for-sale prototype serves as a proxy for more oblique Trump-bashing heard at the annual tech fair.

"It would be better if I could use my hands and feet. I think the hammer isn't satisfying enough," attendee Wang Dongyue, 31, said after sending the presidential noggin lurching back and forth.

"I don't have a good impression of him to be frank, because he's not very friendly to China now."

The trade show, which is organised by the US Consumer Technology Association (CTA), opened this week under the shadow of the escalating trade war.

China and the United States have hit each other with steep tariffs on more than $360-billion in bilateral trade, rattling financial markets and business confidence.

Technology is a key battleground, with the United States pressing governments across the world to drop Chinese telecom giant Huawei from their 5G network development plans, saying it could be used by Beijing for espionage.

On Tuesday, Huawei's chief strategist Shao Yang said in a keynote that the company's target of surpassing Samsung as the world's number one smartphone manufacturer by late 2019 "may take longer" now, without elaborating.

CES Asia, which ends on Thursday, is a branch of the main CES held in Las Vegas.

There was little evidence of any gloom clouding the fair, a lively showcase of the latest in the gadget world including artificial intelligence, self-driving cars, facial recognition products, and other digital developments.

But CTA President Gary Shapiro, in an opening speech, warned that no one wins a tariff war.

"Simply put, a trade war is bad for everyone involved," he said.

READ: US, China harden their stands on Huawei as tech war intensifies

A series of delighted visitors took their turns bashing Trump at the "stress-relief" station, set up by Japanese tech firm Soliton Systems.

At one point, a young Chinese girl began crying after coming face-to-face with the pouty-faced bobble-head.

"They should have a boxing glove. That would feel better," show attendee Liu Di said after watching visitors take their licks.

"The reason we chose Trump is because he is in a sense very outstanding among all the American presidents from the past," he said slyly.

"That is why we chose him."