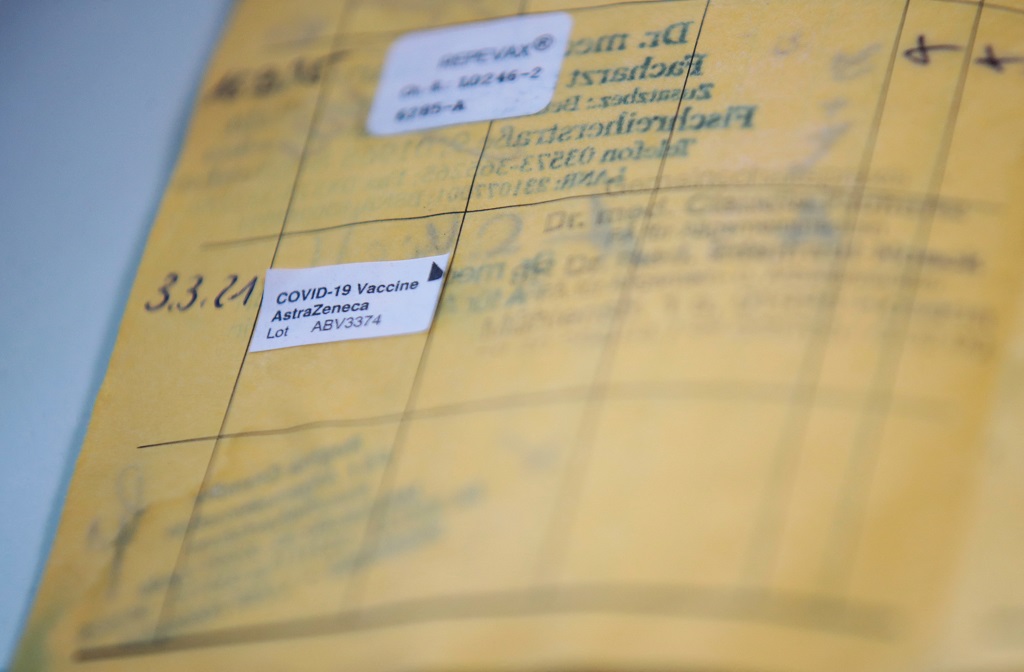 A vaccination certificate with a label for the Astrazeneca coronavirus (Covid-19) vaccine is pictured in Senftenberg, Brandenburg, eastern Germany, on March 3, 2021, where the first vaccinations are given in doctors' surgeries. AFP/Hannibal Hanschke

LONDON - Britain is to trial a system of "Covid status certification" at events including football matches in the coming weeks as a possible way out of virus restrictions, the government said late Saturday.

The Downing Street statement confirmed that Britain plans to issue identification showing whether people are vaccinated, have antibodies or have tested negative, despite opposition from lawmakers in Prime Minister Boris Johnson's own party.

The government is to announce Monday that the system will be tested at events from mid-April including the FA Cup Semi-Final and Final at Wembley Stadium, the statement said.

It quoted Johnson as saying the government was doing all it could "so people can return to the events, travel and other things they love as safely as possible".

The test events "will play an important role in allowing this to happen", he said.

The system will show whether someone has a negative test, vaccination or immunity due to a recent Covid infection.

This comes as MPs from the ruling Conservative Party as well as the opposition Labour party have publicly opposed a domestic "vaccine passport" as discriminatory.

Labour leader Keir Starmer argued that such ID goes against British instincts, while a cross-party group of MPs has said it could deprive people of jobs and services.

Downing Street said the pilot system "could allow higher-risk settings to be opened up more safely and with more participants".

The UK has given 31 million people a first vaccine dose and a second dose to more than 5 million.

The status certification system is intended for events where large numbers of people are close to each other, such as nightclubs, festivals and sports matches, the government said.

It added that it should not be used for public transport or entry to essential shops.

Pubs and restaurants, which are set to reopen indoor service from May 17, will not need to ask people's virus status.

The state-funded health service is developing digital and non-digital ID, the government said.

The test scheme was welcomed by football clubs as it means some fans will be able to attend fixtures.

Manchester City club wrote on its website that it "welcomes the news" that 8,000 spectators will be able to attend the Carabao Cup Final at Wembley on April 25.

The government also confirmed it will grade countries according to a "red, green, amber" traffic-light scheme when outbound international travel reopens on May 17 at the earliest.

People will be able to visit "green" countries for leisure, taking virus test before and after.

They will have to quarantine or self-isolate after visiting other countries.