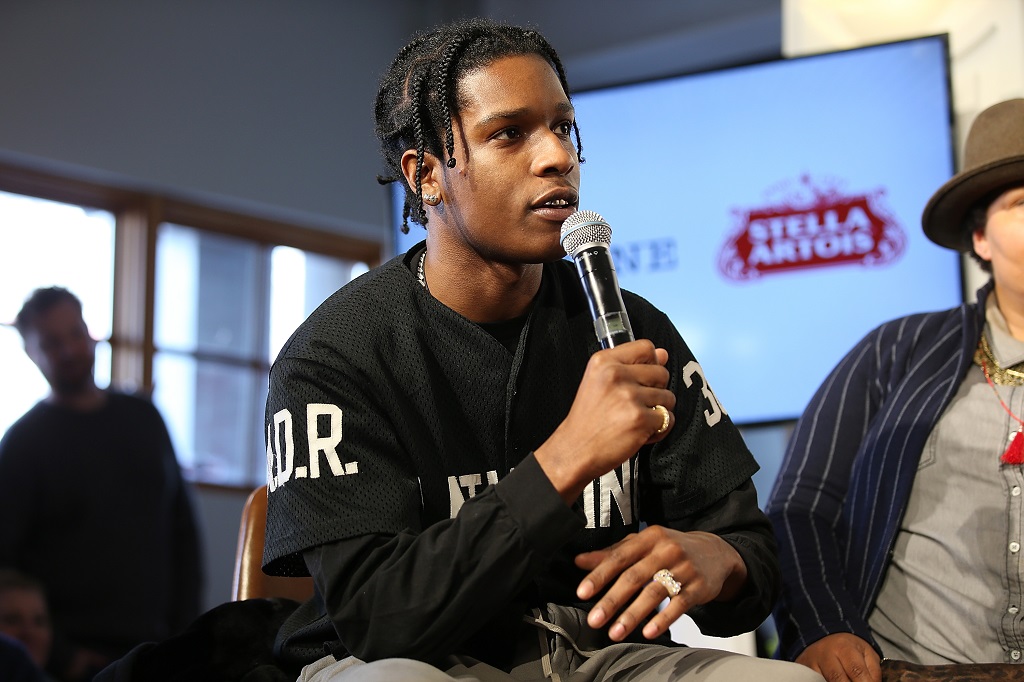 ASAP Rocky and the cast of Monster participated in a live Q&A hosted by Stella Artois and Deadline.com at Cafe Artois during the Sundance Film Festival in Park City, Utah on Sunday, January 21, 2018.

SWEDEN - US rapper A$AP Rocky appeared in a Swedish court on Thursday to give his account of a street brawl, in an assault case that has stirred diplomatic tensions and outraged fans.

The 30-year-old, whose real name is Rakim Mayers, faces up to two years in prison over the incident, which took place in Stockholm on June 30.

Dozens of fans, along with reporters, lined up in the early morning outside the tribunal in the Swedish capital for a chance to hear the rapper testify. Some pleaded "please, please" for the limited tickets handed out by court security officers.

Mayers' mother Renee Black showed up in court for the trial's second day wearing a black shirt with the words "A$AP Rocky" printed on the front and the back.

The rapper was arrested on July 3 along with three other people following the fight. His bodyguard was later released.

Prosecutors last week charged Mayers and two others with assault, which carries a maximum penalty of two years in jail.

The rapper, held in Swedish custody, says he acted in self-defence and has pleaded not guilty.

As the proceedings resumed on Thursday, the defence cross-examined the plaintiff. The 19-year-old has alleged that he was attacked by the rapper and his entourage when he followed them to ask about a pair of headphones that had broken in an earlier scuffle with the artist's bodyguard.

Mayers' lawyer, Slobodan Jovicic, sparred with the plaintiff and tried to poke holes in his testimony, questioning why he had approached and followed the rapper's crew.

Much of the trial has centred around video evidence and whether a bottle had been used as a weapon during the alleged assault.

One video published by US celebrity news outlet TMZ shows the rapper throwing a young man to the ground and apparently aiming several punches at him while he is down.

The court has also seen videos posted to the artist's own Instagram, purporting to show the lead-up to the brawl, which the prosecution argued had been heavily edited.

The defence has argued that the rapper acted in self-defence after the plaintiff and his friend displaying "a threatening, aggressive and deeply provoking behaviour".

"He admits that he threw the plaintiff on the ground, that he stepped on his arm and punched or pushed his shoulder," Jovicic told the court Tuesday.

The trial is scheduled to conclude on Friday, but judge Per Lennerbrant indicated Thursday that the trial might be extended as it looked unlikely to finish on time.

Once the trial concludes, the court then has to announce a verdict date and rule on whether the accused should still be detained in the meantime.

Considered a "flight risk", Mayers was remanded in custody while the case was being investigated.

Fans, fellow artists and US Congress members have been campaigning for his release.

An online petition called #JusticeForRocky has garnered more than 640,000 signatures. Social media campaigns have urged fans to boycott Swedish brands such as IKEA.

US President Donald Trump has repeatedly called for the rapper to be freed, drawing complaints of interference from Swedish politicians.

Robert C. O'Brien, US Special Presidential Envoy for Hostage Affairs, has been sent to attend the trial.

"The president asked me to come here and support these American citizens and we're working to bring them back as soon as possible," O'Brien told AFP on Tuesday, and but declined to comment when attending the court on Thursday.