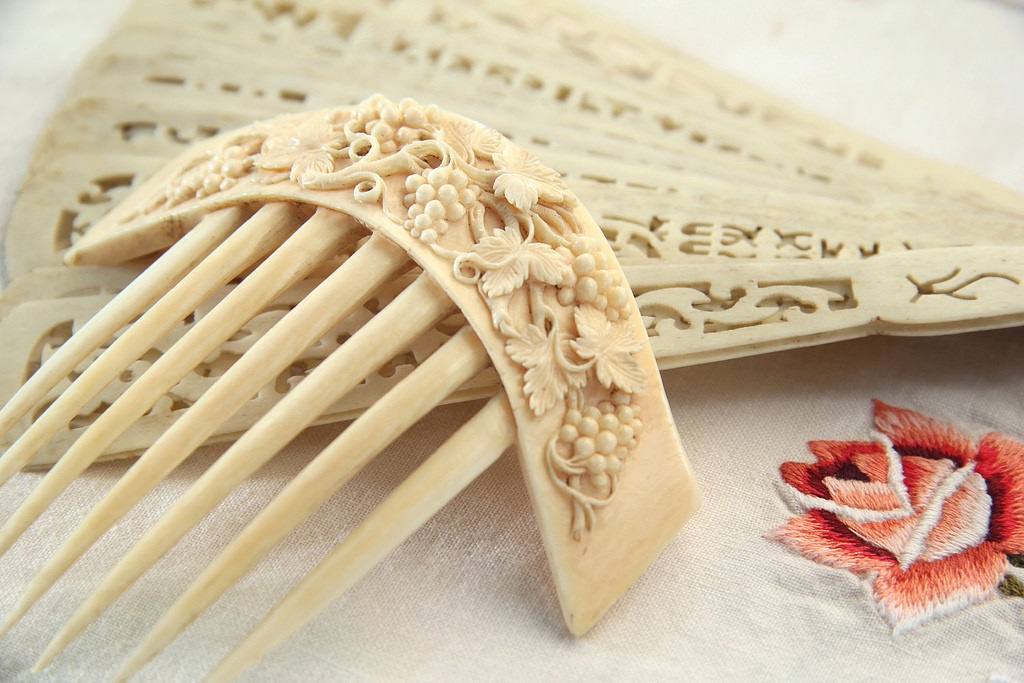 An ivory comb. Most sales from Vietnam to China involve carved ivory.

Vietnam, already a major source of demand for illegally poached rhino horn, is fast becoming a major market for illegal ivory. The amount of ivory on sale in Vietnam has increased by more than 600% in the past eight years, according to a new report by leading ivory trade researchers Lucy Vigne and Esmond Martin.

Vietnam is a member of the Convention on International Trade in Endangered Species of Wild Flora and Fauna (Cites), which bans the international trade in ivory. But there are loopholes in its domestic laws that allow the sale of ivory obtained before laws banning its trade were introduced in 1992.

The researchers found 242 retail outlets with 16,099 pieces of ivory openly displayed for sale in Ho Chi Minh City and Ban Ma Thuot, and in villages in the north near the Chinese border. This ivory is largely made up of small carvings and other pieces of worked ivory. Raw ivory does not appear to be part of the retail trade in ivory that feeds demand in China.

There is one key reason for Vietnam’s increase in trade – China’s crackdown on illegal ivory sales and promises to reduce the domestic trade in ivory. Through evidence gathered and testimony from officials, carvers and wildlife trade investigators, the researchers concluded that Vietnam has become the main route for the smuggling of ivory and other wildlife products into China.

Vietnam’s new role has also been bolstered by a lack of cooperation between law enforcement agencies, a poorly monitored 700km land border between Vietnam and China and a booming online trade in illegal wildlife products.

China has recently been making an effort to be seen to be combating the illegal ivory trade. This follows huge international criticism of skyrocketing Chinese demand for ivory since the turn of the millennium. The demand has decimated African elephant populations, with an estimated 20,000 to 30,000 elephants killed illegally every year.

The country has therefore taken measures to discourage and punish people smuggling tusks or worked ivory coming from Africa.

Early last year China announced a 12-month ban on imports of carved ivory and tusks. It also banned the import of ivory in the form of hunting trophies. This was the only legal way to import unworked ivory post-1989, the year in which Cites voted to ban international trade in ivory by member states. The moratoriums on carved ivory and trophy imports was later extended to 2020.

China also crushed 660kg of seized ivory last year. And during a visit to the African Union headquarters in Addis Ababa, Chinese Premier Li Keqiang pledged US$10-million to help fight poaching. During President Xi Jinping’s official visit to the US in September, he and President Barack Obama made a joint pledge to combat the ivory trade.

As a result of China’s tougher stance, which has also included tighter surveillance regimes at major ports and airports, Vietnam’s trade has increased. Ivory is smuggled into the country via a variety of routes.

The going rate for raw ivory in China is more than $1,000. But the majority of sales in China are not of raw ivory. Most sales involve carved ivory. The researchers established through first-hand research in Vietnam that,

[o]f all the ivory industries in Asia, Vietnamese carvers have multiplied in number and increased their production of illegal ivory items the most rapidly since 2008.

These items are then carried by buyers whose bags are rarely checked when crossing between Vietnam and China.

These developments come at a time of falling market prices for ivory. According to the researchers, by the end of 2015 the market price for ivory was declining. In China it had dropped from $2,100 to $1,200 per kilogram.

But the lower price has not been sufficient to deter poachers, with the majority of the ivory taken from West, East and Central Africa. The incentive to engage in poaching remains high and poachers will still do it if the middlemen and organisers of illicit trade networks still want to buy ivory.

The falling prices could be the result of Chinese government policy. This calls for returning Chinese tourists or workers from neighbouring countries or Africa not to bring home ivory. But it could also be a result of China’s economic downturn, the moratorium on imports of trophy ivory and attempts to enforce anti-smuggling measures more strenuously.

More to be done

Conservationists in Africa have welcomed China’s tighter controls, but say that far more needs to be done to stop the slaughter of elephants.

Iain Douglas-Hamilton, founder of Save the Elephants, told me that he didn’t put any great faith in China’s 12-month ban on imports of carved ivory and tusks as a measure on its own. It does not affect the legal domestic trade or the sale of ivory from government stockpiles. It also excludes Hong Kong, with its extensive legal and illegal trade. But he hoped it was a signal that China was moving towards more viable tightening of controls.

There is also no convincing evidence yet that demand reduction campaigns are seriously affecting buyers in China, and certainly not those who may buy ivory as an investment.

Over the centuries since ivory became a highly prized luxury commodity the trade has evolved and coped with changing centres of demand and developed new routes. That is likely to be the case in the coming years, too. The new routes through Vietnam are ensuring that the market for ivory remains supplied.

There are no simple and easy answers to how to reduce the trade and stop poaching. Increased militarisation of anti-poaching efforts is not having a major effect on cutting the rate of illegal killing and the 27-year-old international ivory trade ban has not stopped the continuation of the commerce in raw tusks and the worked ivory trade.

When CITES member states meet in Johannesburg, South Africa, in September they will argue over whether the ban should be made permanent or whether southern African states should be allowed to periodically sell ivory stocks.

Unfortunately, their deliberations are unlikely to have any great effect on poaching in the elephant range states in Africa or on the highly organised criminal networks that take the poached tusks from Africa to markets in East Asia.