WATCH: How dogs keep SA youths away from violence 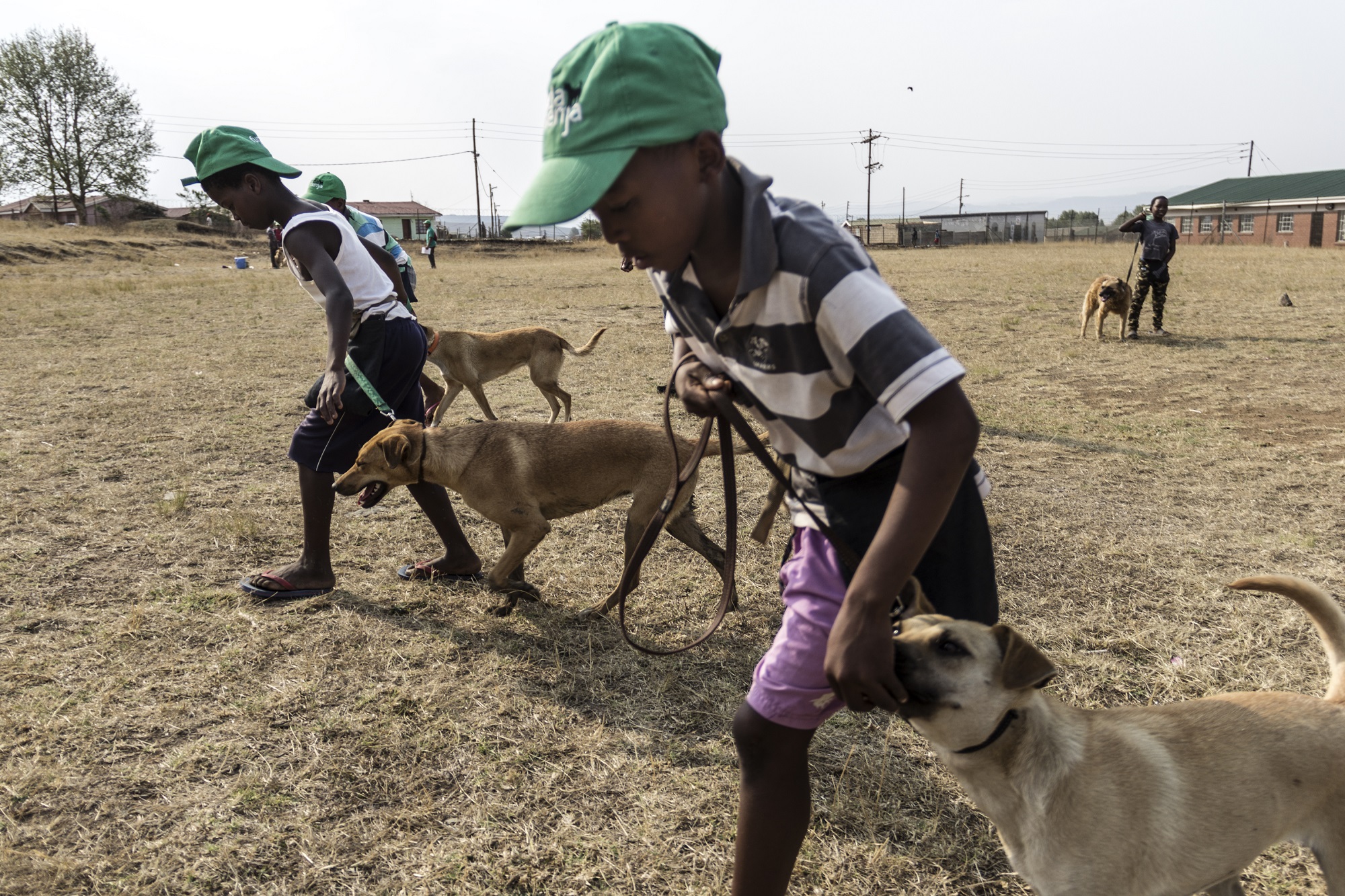 Boys carry out a training excercise with their dogs in the Zamuthule Primary School at the Mpophomeni township in Kwazulu-Natal, on September 22, 2017.

MPOPHOMENI, KwaZulu-Natal - When Thobani Gasa took his puppy for obedience training a few years ago it was just for fun. But soon his own behaviour started to change thanks to his canine companion.

Many townships in South Africa are notorious for gang-related violence but in Mpophomeni, near the south-eastern town of Howick, pet dogs are helping lead the way to a more peaceful future.

On a hot Friday afternoon with their dogs in tow, dozens of children filed neatly into the grounds of the Zamuthule primary school for the weekly training session.

"I was part of the gangs, but this programme changed my life," said Gasa (20), now a trainer.

"When I started learning about dogs, I started to focus on the dogs and abandoned gangster life."

Eight years ago, volunteer dog trainer and retired teacher Adrienne Olivier started teaching children how to treat pet dogs. Every week some 100 children aged between eight and 15 go with their animals for the training she pioneered.

The project, which is called "Funda Nenja" - Zulu for "learn with the dog" - has helped to nurture kinship and respect between humans and their dogs in the township in south-eastern KwaZulu-Natal.

"Coming here has taught me to treat dogs with respect," Sihle Dubazane (13) said while caressing his four-year-old crossbreed, Lion. "A dog has to be treated nicely, it has blood, it can feel."

In a classroom nearby, children and their puppies sat quietly on cream-coloured rubber mats, listening attentively to a tutor.

In the playgrounds outside, children and their dogs are clustered into three classes - ordered from beginners to seniors, depending on their dog&39;s level of obedience.

A better understanding of animal behaviour has helped the youngsters to understand their own.

Violence against or involving children in South Africa is alarmingly common, according to several children&39;s charities.

A 2016 study revealed that in some parts of South Africa more than half of children are abused by caregivers, teachers or relatives.

Children who experience or witness violence are at a significantly heightened risk of becoming abusers themselves later in life, according to the June report of the Cape Town-based Children&39;s Institute entitled "Out of Harm&39;s Way?".

Vuyani Dube (11) has been taking his dogs to Funda Nenja for just three months and already his family has noticed the change in his behaviour.

"He wasn&39;t this disciplined and he wasn&39;t this responsible," said Siphesihle Dube, referring to his nephew as he walked back home from the school with one of the family&39;s three dogs.

"Because of the history of violence involving the kids, (the project) is very, very good," said Dube. "It keeps them away from the street corners where they end up smoking."

Although there has been no scientific evaluation of the psychological impact of the dog training on the behaviour of the Mpophomeni children yet, volunteers and social workers say parents generally give positive feedback.

"I think it is because we are teaching the children that... they can communicate with the animal without resorting to violence or force... (and) it is rippling over into their everyday interactions with other people," said Olivier.

"If you can get a dog to do something without hitting it, surely you can get another human to co-operate through negotiation," she said.

FILE: Children stand with their dogs outside the Zamuthule Primary School at the Mpophomeni township located near the Midmar dam in Kwazulu-Natal, on September 22, 2017. CREDIT: TADEU ANDRE / AFP

Friday afternoons are much anticipated. The children start queuing up outside the school gate long before the lessons begin.

As soon as they are let in, children and their dogs are treated to a snack and something to drink. A veterinary nurse is on standby to check the health of all of the dogs.

Dogs in the area have traditionally been used to protect properties from intruders or for hunting, said the project&39;s community liaison officer Winnie Sangcosi (61).

"People are now telling me that violence is coming down. The children have forgotten about whoonga," said Sangcosi, referring to a potent local street drug. "Now they play with their dogs or study."