Wikipedia monument in Poland seen as sign of hope 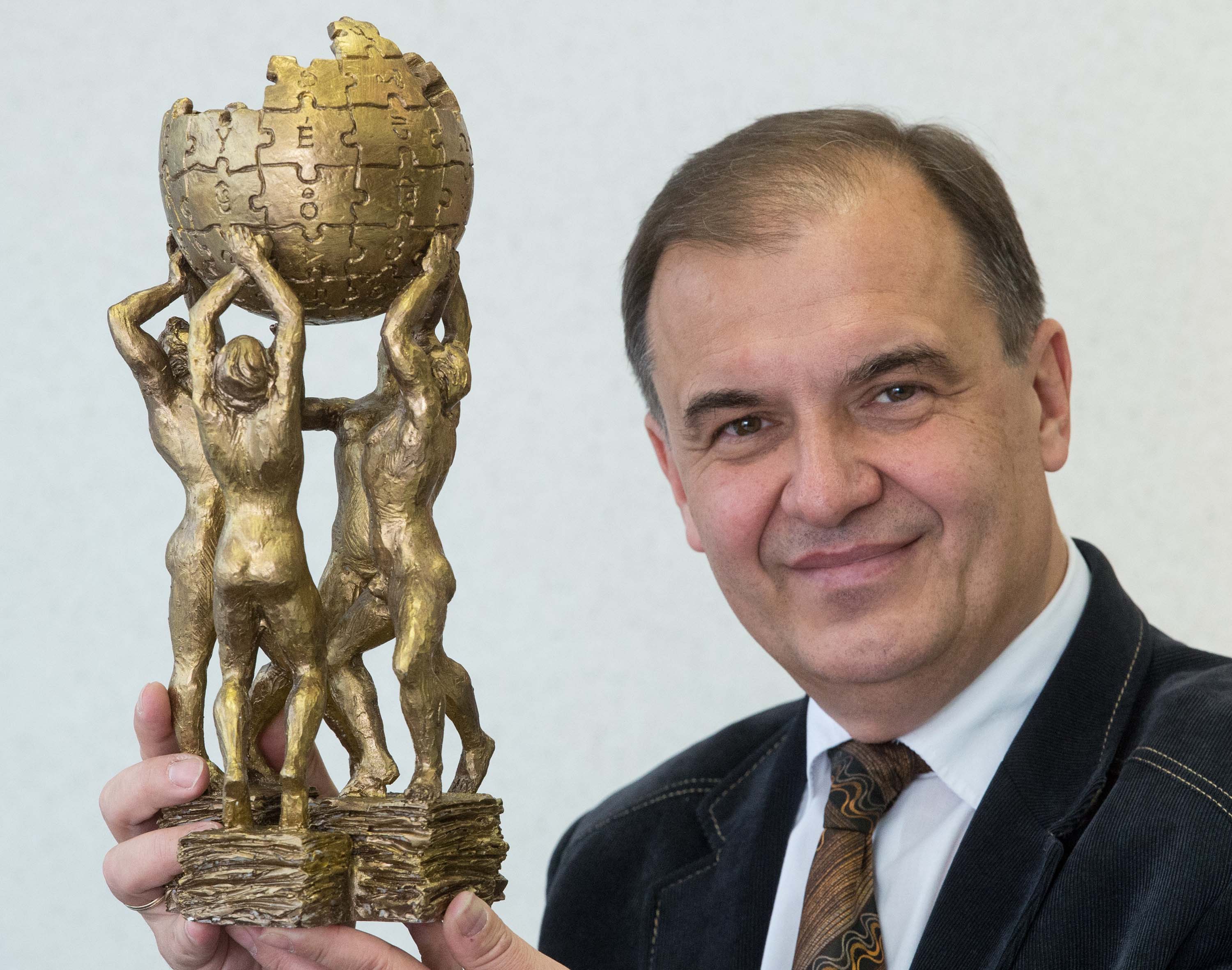 Krzysztof Wojciechowski, director of the Collegium Polonicum of the Europe-University Viadrina in Frankfurt (Oder) and of the Adam Mickiewicz University in Posen, shows the model of the Wikipedia monument by Armenian sculptor Mihran Hakobyan.

SLUBICE - Poland&39;s smallest university town is setting up a monument for Wikipedia, the world&39;s most extensive online encyclopedia. According to the man behind the project, it is a celebration of the democratic nature of the site, and the communal effort driving it.

The sculpture shows four male figures stemming a large globe made of puzzle pieces - the symbol of the world&39;s most comprehensive online encyclopedia Wikipedia.

Created by Armenian artist Mihran Hakobyan, it will be unveiled Wednesday in the Polish town Slubice, close to its western border with Germany. It is the world&39;s first monument to Wikipedia.

Krzysztof Wojciechowski, director of the Collegium Polonicum in Poland&39;s smallest university town, has fought for years to build the monument.

When he started looking for funding four years ago, nobody wanted to donate or even support the idea.

To Wojciechowski, the Wikipedia monument is a celebration of the democratic nature of the site, and the communal effort that it instils -particularly in his native Poland.

In a world where many define their self-esteem by the number of Twitter followers or &39;likes&39; on their Facebook page, Wikipedia - encompassing more than 30 million articles in almost 300 langugages - is almost revolutionary, he says.

"It is like the defense of modest people against the monster of egotism," Wojciechowski says, praising the anonymous authors of Wikipedia who often spend a vast amount of time on their articles. "It is a huge effort, and generally the quality of the articles is quite good."

"To me this is a sign of hope that society is still ready and willing to do something unselfish - and that there is hope for civilization itself," he says.

Wojciechowski is puzzled that noone else has come up with the idea of creating a monument for Wikipedia. After all, the online encyclopedia has been in existence since 2001.

So why build the monument in Slubice and not in San Francisco, where Wikipedia was founded? Wojciechowski admits there is an element of patriotism involved.

"From the very beginning Polish authors were among the most active participants," he says, referring to the fact that there are more than 1 million entries in Polish, rivalling the number in Spanish and French.

When it comes to the number of Wikipedia authors in relation to the overall population, Poland ranks second after the Netherlands, making it a very democratic effort.

"I must admit, it makes me proud," Wojciechowski says.

The Polish Wikipedia organisation has set up a forum in which people can comment on the project.

"Thank you for this gesture of recognition," Andy Mabbett from Birmingham in England writes.

"I am proud that there is a monument for something I am participating in," Polish Wikipedia author Tomasz says.

As to be expected, the first Wikipedia articles about the monument are starting to crop up in different languages. "There are constant edits and additions," Wojciechowski says. "I&39;ve lost count already."