You may not kiss the bride: Social distancing in force at Indonesia wedding 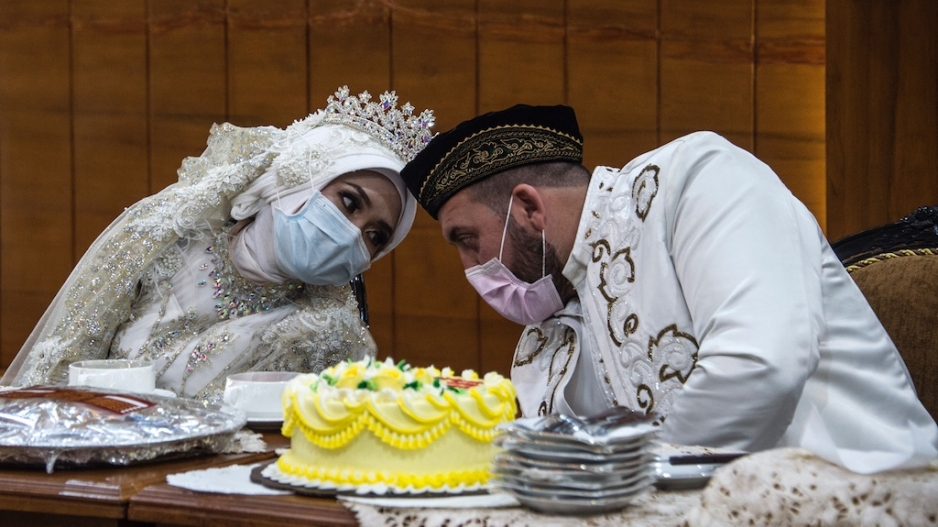 SURABAYA - Closed borders and social distancing rules to stem the coronavirus outbreak failed to stop one transnational couple in Indonesia from tying the knot on Wednesday, minus the customary kiss to seal the deal.

The couple both wore facemasks and kept their distance through the ceremony to comply with strict rules imposed by authorities, who have banned mass gatherings including weddings but allowed some exceptions for marriages booked before the pandemic began.

WATCH: Keeping your relationship intact during the lockdown

Virus precautions were on full display, with a maximum of 25 people at the event, temperature checks at the door and hand sanitiser throughout the venue. The wedding was also wrapped up in just 30 minutes.

The only hint of physical intimacy came when Ozdemir, whom Octora first met on social media, briefly took off his mask for his bride to feed him a piece of wedding cake.

Their reception party was cancelled and only a compromise with the mosque allowed the pair to proceed with the ceremony on Wednesday, earlier than planned.

"All people must pass our disinfectant gate after being checked with a thermal gun," Al Akbar mosque spokesman Helmy M. Noor told AFP.

Octora said she was still happy with the wedding despite the restrictions.

"We were worried that if we stuck to March 29 for the vows things might have happened and we would not have been able to marry in the end," she said.