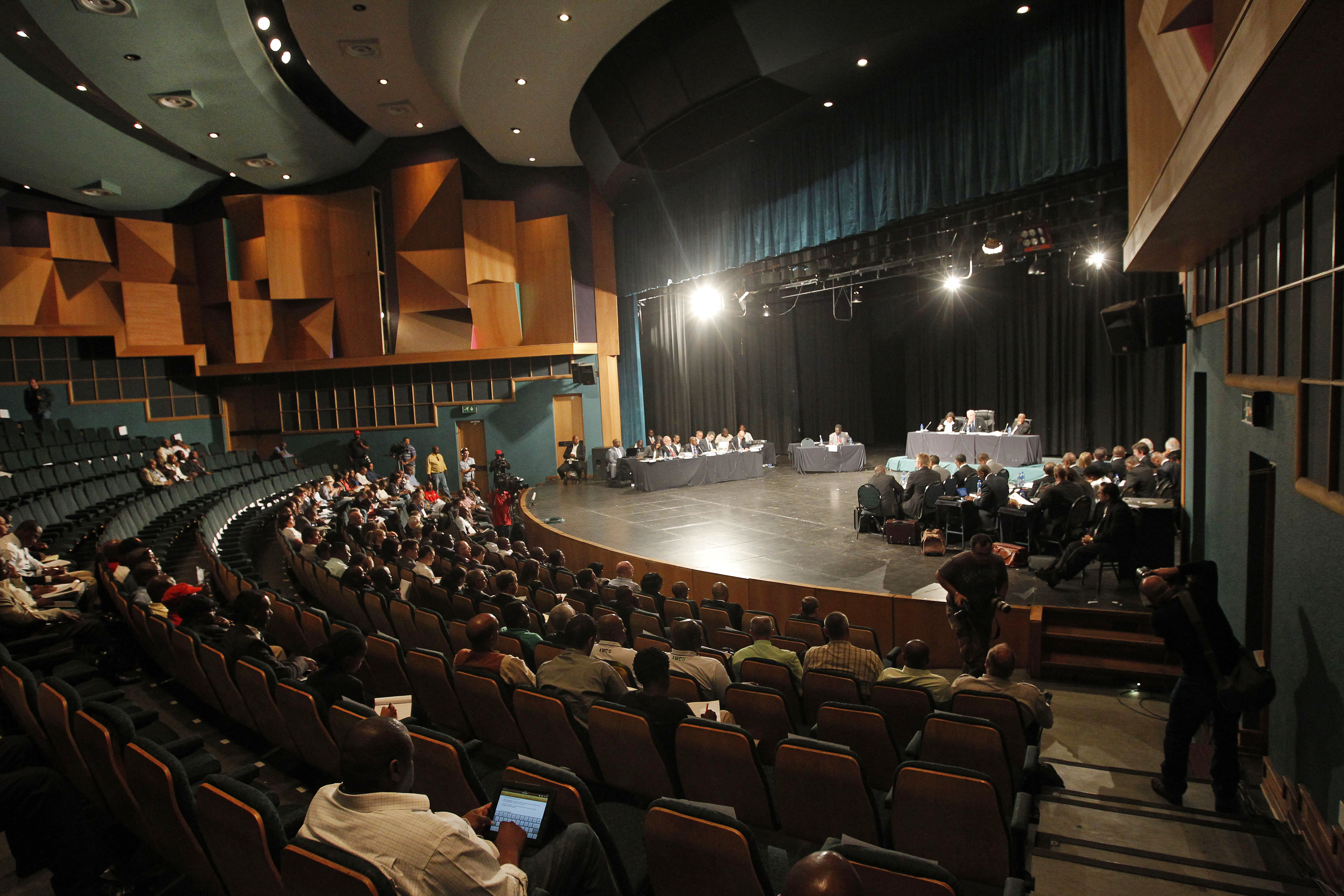 This file image shows the judicial commission of inquiry into the shootings at the Lonmin platinum mine in Marikana sitting on its first day, chaired by retired judge Ian Farlam, 29 September 2012.

PRETORIA - Protesting Marikana miners were advised that a certain sangoma had the ability to cast a spell that would make police firearms jam, the Farlam Commission of Inquiry heard on Thursday.
A witness brought by the SA Police Service, only identified as Mr X, said even the most religious miners contributed to a fund for the sangoma&39;s payment.
"A decision was taken among the miners that we needed a tight (reputable) inyanga. Kaizer said he knew one from Bizana called Nzabe," said Mr X.
"He said the inyanga would make people brave. He would make the police guns lock if we are being shot at."
These were days before August 16, 2012. Kaizer was one of the protesting miners.
Mr X said miners went around the koppie, collecting donations to pay the sangoma.
"I donated R20. I remember Kaizer and Xolani were going to get the inyanga while the donations were going on. They came back with two youngsters who worked with the sangoma," said Mr X.
"They told us the inyanga wanted R1,000... I contributed R500. Even the religious people contributed."
In his statement to the commission, Mr X said the sangoma instructed protesting miners to wait for police before launching an attack.
"The further instructions that were communicated to us were not to look back once we launched an attack, not to carry cellphones and coin money and if possible, conduct ourselves in a manner that would provoke the police to fire first," said Mr X.
They were told they were invisible to police and should approach them in a crouch.
Mr X said on August 12 they killed two Lonmin security guards.
"We killed them at the bus stop. We burnt one in the car and we took pieces of flesh from the other one. That would make our muti strong, so that we go forward when we attack.
"The sangoma said we should bring the human parts," said Mr X.
Mr X, who may not be identified, testified via video link from an undisclosed location earlier on Thursday. He claims he was one of the group of protesting Marikana miners who underwent traditional rituals, which included two sangomas burning live sheep and swallowing their ashes on August 11, 2012.
In his sworn statement he details how the mineworkers attacked and killed Lonmin security guards Hassan Fundi and Frans Mabelani. Some of Hassan&39;s body parts were removed and taken with Mabelani&39;s ashes for use in muti rituals.
He details how sangomas cut parts of Fundi into smaller pieces, mixed them with blood, and burnt them to ashes.
"We were instructed by the inyangas to stand in a line and the ashes were put in our mouth using a spoon which we licked and swallowed," Mr X wrote in his affidavit.
"After this, the inyangas told us that they had accomplished their mission in protecting us from police bullets, made us fearless, strong, and invisible to the police."
Mr X narrates in the affidavit how he and other protesters attacked and killed two police officers on August 13. He said they robbed the officers of their cellphones and service firearms.
The inquiry is investigating the deaths of 44 people during strike-related violence at Lonmin&39;s platinum mining operations at Marikana.
Thirty-four people, mostly striking mineworkers, were shot dead in a clash with police, over 70 were wounded, and another 250 arrested on August 16, 2012. Police were apparently trying to disarm and disperse them.
In the preceding week, 10 people, including the two policemen and two security guards, were killed.
The inquiry resumes on Friday.