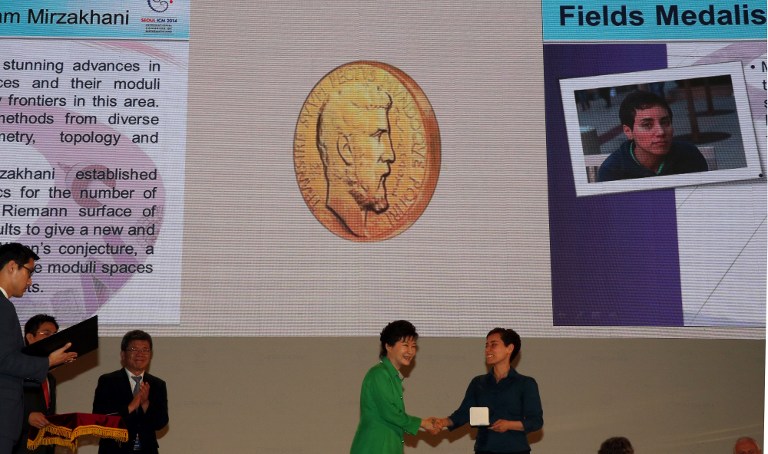 SEOUL - An Iranian-born mathematician has become the first woman to win a prestigious Fields Medal, widely viewed as the Nobel Prize of mathematics.

Maryam Mirzakhani, a Harvard-educated mathematician and professor at Stanford University in California, was one of four winners announced by the International Congress of Mathematicians (ICM) at its conference in Seoul on Wednesday.

An expert in the geometry of unusual forms, she crafted novel ways to calculate the volumes of oddly-shaped curved surfaces.

"Fluent in a remarkably diverse range of mathematical techniques and disparate mathematical cultures, she embodies a rare combination of superb technical ability, bold ambition, far-reaching vision, and deep curiosity," the ICM said in a statement.

Mirzakhani was born in Tehran in 1977 and earned her PhD in 2004 from Harvard University.

She has previously won the 2009 Blumenthal Award for the Advancement of Research in Pure Mathematics and the 2013 Satter Prize of the American Mathematical Society.

The Fields Medal is given out every four years, often to multiple winners who should not be over 40 years of age.

The other three winners this year were Artur Avila of France, Manjul Bhargava of Princeton University in New Jersey, and Martin Hairer of the University of Warwick in Britain.

With no Nobel prize given for mathematics, the Fields Medal is regarded as the top global award for the discipline.

The medals were given out by South Korea&39;s first woman president, Park Geun-Hye.

"I congratulate all the winners, with special applause for Maryam Mirzakhani, whose drive and passion have made her the first woman to win a Fields Medal," Park said.

Prior to Wednesday&39;s ceremony, all 52 previous recipients had been men.

"This is a great honour. I will be happy if it encourages young female scientists and mathematicians," Mirzakhani said in a press release from Stanford University.

"I am sure there will be many more women winning this kind of award in coming years," she added.

Mirzakhani became known on the international mathematics scene as a teenager, winning gold medals at both the 1994 and 1995 International Math Olympiads -- finishing with a perfect score in the latter competition.

In 2008, she became a professor of mathematics at Stanford, where she lives with her husband and three-year-old daughter.

"On behalf of the entire Stanford community, I congratulate Maryam on this incredible recognition, the highest honour in her discipline, the first ever granted to a woman," said university president John Hennessy.