Colombians on a high as medical marijuana legalised 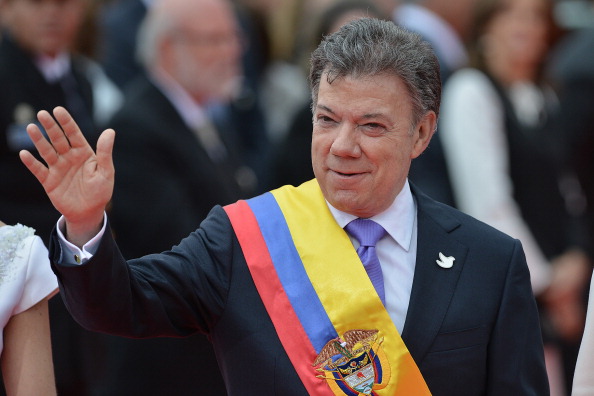 Reelected President Juan Manuel Santos raises his hand in greeting after he officially takes office as President of Colombia at Plaza Bolivar on August 07, 2014 in Bogota, Colombia.

BOGOTA - President Juan Manuel Santos on Thursday endorsed newly introduced legislation that would legalise marijuana for medicinal and therapeutic use in this drug war-afflicted Andean nation.

Santos, a proponent of rethinking prohibitionist drug policies, made the announcement at a drug policy forum Thursday in Colombia&39;s capital, Bogota. It was his first major drug policy statement since he won re-election in June.

The bill introduced last month by a governing coalition senator is "a practical, compassionate measure to reduce the pain (and) anxiety of patients with terminal illnesses, but also a way of beginning to strip from the hands of criminals the role of intermediary between the patient and the substance that allows them to relieve their suffering," Santos said.

In the Americas, Uruguay has approved legal pot and Jamaica&39;s justice minister announced in June plans to legalize the drug for religious and medical purposes and decriminalize the possession of amounts up to 2 ounces (57 grams).

Possession of no more than 20 grams of marijuana for personal use is currently legal in Colombia.

The medicinal-use bill was introduced by Sen. Juan Manuel Galan, whose father was assassinated in 1989 by cocaine traffickers.

He said that other countries in the region considering similar measures include Argentina, Brazil and Chile.

Galan said his hope is to have his bill, which would put the distribution of medical marijuana under government control, gain final legislative approval next June.

Ethan Nadelmann, director of the New York-based Drug Policy Alliance, said some U.S. states as well as countries including Israel and Canada are well advanced in offering government-administered legal medical marijuana, while a bill was introduced last week in the Central American nation of Costa Rica.

In Colombia, marijuana plantations help enrich leftist rebels and right-wing paramilitary bands alike, although cocaine is a bigger business for them.

The commander of Colombia&39;s counterdrug police, Gen. Ricardo Restrepo, said that the country currently has about 1.5 square miles (390 hectares) of marijuana fields and that a pound costs about $230 (R2,400).

Colombia is the world&39;s No. 2 cocaine-producing country after Peru, according to the United Nations and U.S. Drug Enforcement Administration. It was the global leader until 2012.

A two-decade U.S.-backed crackdown on Colombia&39;s drug cartels and extensive aerial eradication of coca crops has somewhat diminished and compartmentalized the trade.

The human cost of the fight against illegal drugs has been terrible for Colombia and other supply and transit countries, Santos told the forum.

"We have spent billions of dollars on an ineffective war that has claimed more than 60,000 lives in Mexico alone in the last six years," he said.