Asia markets cautious ahead of more US rate hike news 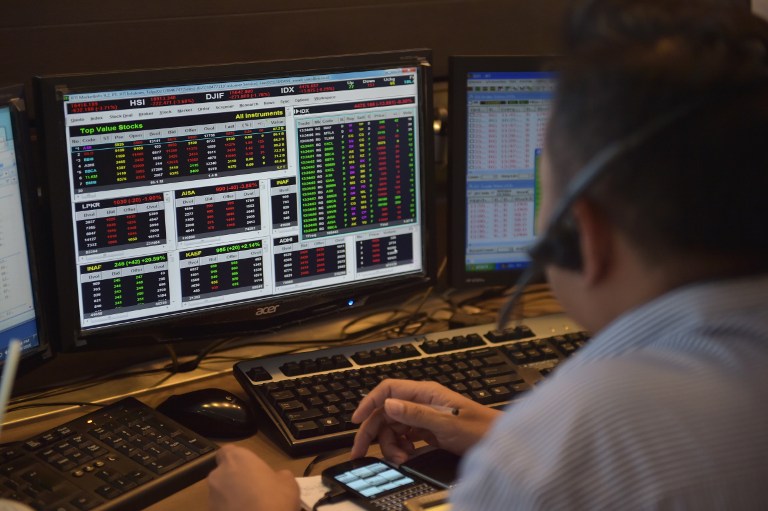 File: Tokyo stocks tumbled 1.09 percent by the break with automakers especially hit by a stronger yen.

HONG KONG - Asian stock markets moved cautiously on Monday as investors sat tight for fresh news on a US rate hike and after a G7 finance ministers&39; meeting saw Tokyo pressed not to weaken its currency.

Global stocks rallied in the previous session despite talk that the US Federal Reserve could raise interest rates in June, but analysts expect some market volatility ahead of further indicators.

A stronger yen meanwhile weighed on Tokyo exporters after a meeting of Group of Seven finance ministers refrained from giving Japan an opening on possible intervention to stem the rise of its currency.

"Fed worries are coming back into focus and this could mean more uncertainty around the US dollar, the yuan and commodity prices. However, beyond near-term volatility, we still see shares trending higher."

Dealers will be eyeing a speech by Federal Reserve Chair Janet Yellen on Friday at Harvard University, analysts say.

"There are several conflicting cross-currents in financial markets, but the wash-up is the Fed&39;s message is that the world is better than you think and the market seems to be warming to this view," Chris Weston, chief market strategist at IG in Melbourne, said in an email.

"The US payrolls on 3 June and Janet Yellen’s 6 June speech is now key."

Sydney shed 0.2 percent and Bangkok was 1.05 percent down, but Hong Kong was up 0.4 percent, while Shanghai and Seoul advanced 0.6 percent and 0.3 percent respectively.

Tokyo stocks tumbled 1.09 percent by the break with automakers especially hit by a stronger yen.

The dollar fell against the safe haven currency after Tokyo&39;s threat to intervene to tame a resurgent yen faced criticism at the G7 ministers&39; meeting.

Japan last intervened in currency markets around November 2011, when it tried to stem the yen&39;s rise against the greenback to keep an economic recovery on track after the quake-tsunami disaster earlier that year.

In a statement which presented a clear rebuff to Tokyo, the G7 group "underscored the importance of all countries refraining from competitive devaluation".

The meeting comes ahead of a G7 summit in Japan later this week to be attended by US President Barack Obama and other leaders.

Obama is currently in Vietnam for a landmark visit capping two decades of rapprochement between the former wartime foes, as both countries look to push trade and check Beijing&39;s growing assertiveness in the South China Sea.

Increased trade ties will feature prominently during the trip, with Obama keen to make the case for a trans-Pacific trade deal that faces an uncertain future.

Obama is the third post-war president to visit Vietnam after Bill Clinton and George W Bush in 2000 and 2006, respectively.