Car makers flag SA as base for drive into Africa 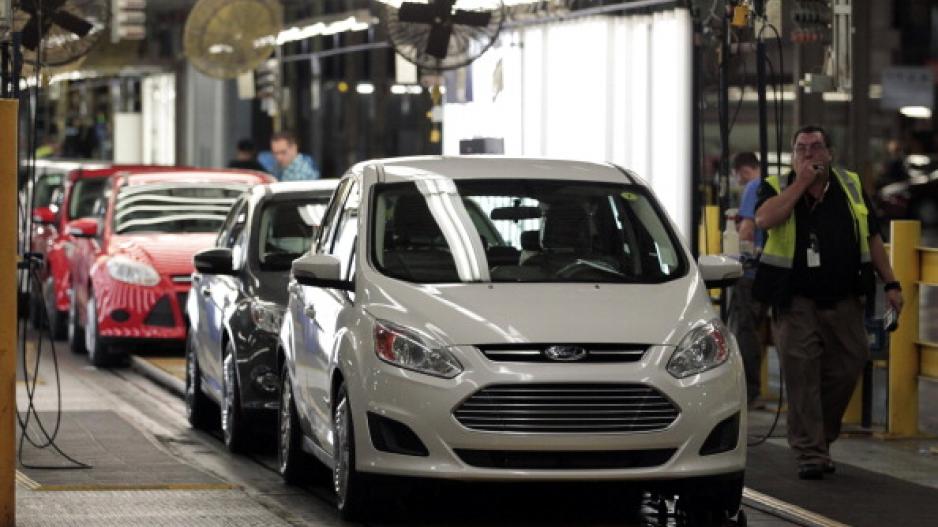 Ford Motor Co. C-Max hybrid cars reach the end of the production line at the company's Michigan Assembly Plant in Wayne, Michigan, U.S., on Monday, Oct. 7, 2013. Ford is celebrating the 100th anniversary of the moving assembly line at the plant.

In 2016, Ford announced a R2.4bn investment in SA to build its Everest sports utility vehicle (SUV). BMW is spending R6bn to switch production at Rosslyn from the 3 Series to the X3 in 2018. Chinese car maker Beijing Automotive Industry Company will invest R12bn in a new plant in the Eastern Cape.

Nissan SA is expected to announce it will join its global counterparts in producing the new NP300 Navara. Renault SA CEO Nicholas de Canha has confirmed that his company is keen to see the Nissan factory also produce the future Renault Alaskan bakkie, which shares a platform with the Navara.

All these investment announcements come a year after speculation was rife that SA was facing a threat from automotive manufacturing further north in Africa.

Former trade and industry minister Alec Erwin has been instrumental in creating an automotive industry policy framework in Nigeria and its neighbouring countries.

The policy is based on SA’s Automotive Production Development Programme.

But in Nigeria, automotive companies are partnering with vehicle assemblers, not to boost the country’s local industry but to bypass import duty legislation on new vehicles. The industry is not at full tilt and operates to put components together.

These semi-knock down kits are still manufactured in SA.

This explains why SA-based car companies are at the forefront of a new organisation, the African Association of Automotive Manufacturers (AAAM).

“The aim is promoting a policy environment that is conducive to the development of the automotive sector,” says Jeff Nemeth, AAAM chairman and president and CEO of Ford subSaharan Africa.

The push towards supplying the rest of the continent with kits and components, together with lucrative export contracts, has been widely credited for the recent investments into SA.

“The investments did come as a surprise,” says Byron Messaris, senior industry analyst at Frost and Sullivan. “But when you look at the export model, it starts to make sense.

“It is all about return on investment,” says Craig Parker, programme manager for mobility at Frost and Sullivan.

Messaris remains confident the government is committed to the local industry and expects more uptake.

Commenting on the possibility of a hub further north on the continent, Messaris says: “Alec Erwin and others are almost gleefully optimistic.”

Parker is confident planned transport corridors will open things up over the next 10-15 years and points to the new Techno City north of Nairobi as one area of opportunity.

However, he expects much of the demand to be for commercial vehicles.

There is potential for commercial vehicle manufacturing, and Parker predicts that some companies will seek a first move advantage. Is China likely to play a major role in this?

“We can’t underestimate the bilateral agreements in place through Brics (Brazil Russia, India, China and SA),” says Messaris, but he points out that companies such as FAW have been battling to compete against established rivals such as Daimler and Isuzu Trucks.

Volatility in West Africa is also creating a situation in which people are questioning buying a new car. Consumer confidence is low and, unlike in SA, people in Nigeria and Kenya have limited access to finance. In these countries, the largest purchases are by governments and corporates.

On the strength of this, SA looks set to maintain its dominant position as the number one auto manufacturing country on the continent, but there continue to be some risks.

“The recent announcements of investments are based on risk versus reward,” says Parker. “The automakers have seen the risks as being acceptable.”

But there is one country that SA might need to be aware of.

“There is a lot of noise coming out about Morocco,” says Messaris. “There has been lots of investment.”

Morocco increased its automotive production 24.3% in 2015 to a total of 288,329 vehicles. It is now the second-largest automotive manufacturing country in Africa after SA.

It is ideally placed for access to both European and African markets, and continues to be mature and stable. It is a market that investors are banking on, and vehicle makers expect Morocco to be one of the top 20 manufacturing nations in the world by the end of 2017.