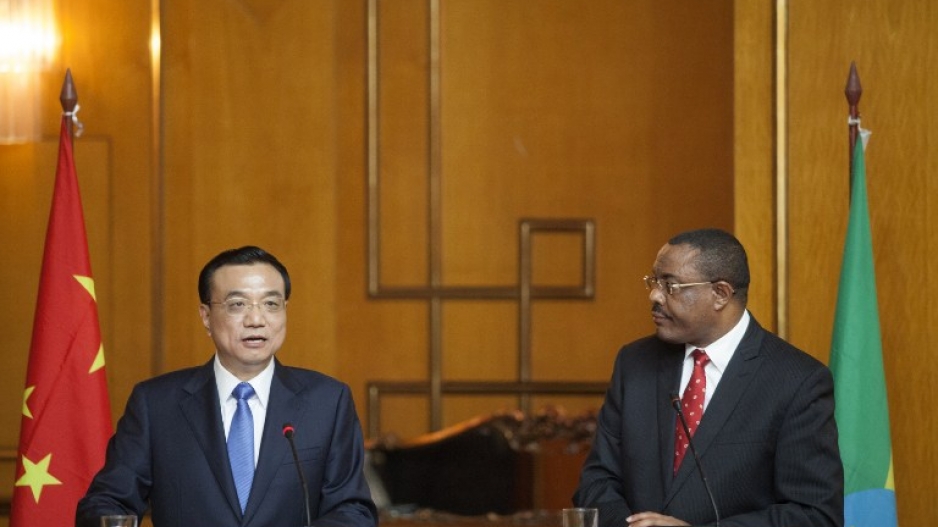 Chinese Prime Minister Li Keqiang (L) and his Ethiopian counterpart Hailemariam Desalegn (R) deliver a joint press statement during a treaty signing ceremony at the presidential palace in Addis Ababa on May 4, 2014.

ADDIS ABABA – There are about 60,000 Chinese living in Ethiopia who are involved in everything from telecommunications to railways, and employing or partnering with up to one million Ethiopians.

This dispelled the criticism by some that China largely had a business relationship based on the extraction of resources, China’s ambassador to Ethiopia and the African Union, La Yifan, said at a press conference here this week.

“One of our strongest economic partners in the continent, Angola, is among the largest oil producing nations in the continent, while Ethiopia offers a different model, being a net importer of oil, and not relying on export of minerals,” said La.

He added that Chinese companies, with the help of Chinese government loans, had invested heavily in Ethiopia because of its abundant labour force, stability, investment in higher education, fast economic growth, proximity to the Middle Eastern market and the preferential access it had been given to the European Union and US markets.

“The best way to contribute to human rights is creating jobs and alleviating poverty,” La said. The ratio of Chinese investors to local jobs created was normally one to between 15 and 20, depending on the different industries, he said.

This supported whole families and helped alleviate the refugee problem by reducing the need for Ethiopians to risk their lives to go to Europe to find jobs, he added.

He contrasted this with European nations which were inclined to care for the welfare of refugees while ignoring the need to address the root causes of the problem at home by building factories, for example.

La also revealed that he expected the 656-km Ethiopia-Djibouti railway line which was being built at a total cost of US$3.4 billion, mostly in Chinese money and was being constructed by Chinese companies, to be finished in mid 2016.

Ethiopia, the world’s most populous landlocked nation, uses the Port of Djibouti for more than 90 percent of its export-import trade, with its fast-growing economy putting pressures on the capacity of the port to handle cargo.

Animosity between Ethiopia and Eritrea has prevented Ethiopia from using that country’s ports on the Red Sea.

Continuing instability in Somalia, lack of international recognition of the self-declared republic of Somaliland, as well as infrastructural problems have hindered Ethiopia’s ability to use alternative ports.

Ethiopia’s ties with neighbouring Sudan and Kenya, including infrastructural projects linking with them, have grown. But the distance of their ports has discouraged Ethiopa from taking those routes to market.

“We also expect the US$1.2 billion Grand Ethiopian Renaissance Dam (GERD) Power Transmission line to be finished in the second half of 2016,” La added.

A Chinese company, State Grid of China Electric Power Equipment & Technology Co. Ltd (SGCC) is installing the high-voltage electric transmission lines which will carry electricity from the hydro-electric power plant on the dam which is expected to generate 6000 MW when completed by the end of 2017.

The dam is being constructed on the Blue Nile river and this has provoked strong resistance from downstream countries, especially Egypt, which depends heavily on the Nile for its survival.

Asked about the recent Chinese economic slowdown and its risks to countries in Africa, La warned that resource-based economies could feel the sting from the slowdown while those expanding manufacturing were likely to benefit.

“There’s no denying, particularly over the last year, that the Chinese economy which has been growing at breakneck speed has tempered, and it has entered the realm of the New Normal, concentrating on quality and efficiency of growth,” said La, though adding that its 6,9% growth was still more than twice the global average.

He said Africa was undergoing a big change, from 500 years of depending on raw materials, towards processing products. Many African countries, including Ethiopia, were benefiting from China outsourcing plenty of manufacturing and labour-intensive industries, he said.

But he cautioned Ethiopia against following the growth model of pollute first and clean later, which had caused pain and regrets in his country.

Despite the economic slowdown in China, bilateral trade between the two countries grew from US$3.4 billion in 2014 to US$3.8 billion in 2015.

La also indirectly confirmed reports that China intended building its first African military base in Djibouti which he said was to guarantee maritime safety in the Gulf of Aden and off the coast of Somalia.

He also pledged that the US$60 billion in assistance to Africa which China offered at last month’s China-Africa summit in Johannesburg, South Africa, would not be affected by China’s economic downturn.

The summit had paved the way for more financial facilities to be harnessed, not only in Ethiopia, but across the continent, with infrastructure development as the basis. This would attract investment from many countries.

He said Africa was the continent of growth, having six of the ten fastest growing economies in the world.

“To help China itself, we need to invest in the continent, as the Chinese economy endeavors to be mature, relying more on upscale industries and improving its economic structure,” La said.