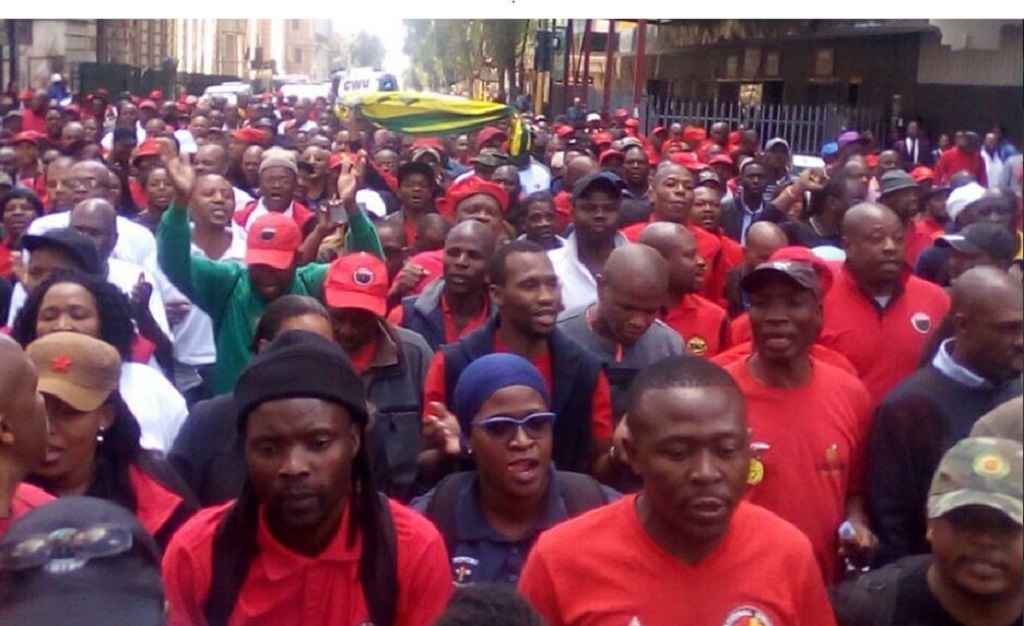 File: Nehawu General Secretary Zola Saphetha said, "we have to mobilise all workers even those outside the fold of Cosatu to come to Cosatu even including Numsa if necessary to bring those workers to Cosatu."

JOHANNESBURG - Cost marched to Abuses&39; headquarters on Thursday and asked the bank to pay back to R2.5-billion bailout it got from the Reserve Bank during the apartheid era.

COATING arrive at ABA, they are marching against the bank. pic.twitter.com/Dijon

Cost&39;s additional reason for its demonstration is that it accuses ABA of charging exorbitant banking fees and says this should stop.

The labour federation also wants the bank to come clear on reports that it is involved in collusion with two other South African banks and several international institutions.

“Those directors who were involved in collusion and made sure our Rand fluctuated, we get inflation must be exposed and dismissed, also lay corruption charges,” said Cost&39;s Sauteing Provincial Secretary Tunisian Daimler.

The Competition Commission on Wednesday said it has been investigating a case of price-fixing and market allocation in the trading of foreign currency pairs involving the rand since April 2015.

The case has been referred to the tribunal for prosecution.

[WATCH] Reporter @Kayla updates us ahead of Cost&39;s march to the ABA headquarters. DStv 403 pic.twitter.com/pro5XiPfui

Daimler announced that Pastor Mboro was at the gathering, to loud cheers.

COATING Mbhoro says he lost over R1 million at ABA, a thief is a thief. pic.twitter.com/s5gdkxvbM9

Cost handed over a memorandum with their demands to a representative from ABA.

The federation has given the bank two days to respond or face losing some of its customers.

ABA, meanwhile has hit back at Cost for saying it symbolises what&39;s wrong with the economy. The bank says much of the good work it does across the continent, is being ignored.

"Our contribution is significant - we employ and pay billions in taxes," said ABA Spokesperson, Songezo Zibi.

"More specifically ... the competition commission [issue] ... it’s in the public domain - we cooperated fully because the allegations relate to a very small number of banks.

"We are determined to root out any unethical behaviour," Zibi said.

"The competition commission is not seeking a penalty against ABA or Barclays over these allegations."

“One of the clear conclusion of that investigation which produced 150 page report, which is publicly available was that ABA has no continuing obligation to the assistance of Bankorp and Bankorp was a bank ABA acquired in 1992 and assistance began in 1985, 7 years before our submission to the Public Protector say the exactly same thing, we have also provided documentary evidence to say there is no evidence for ABA to pay,” said Zibi.

But Cost is not backing down.

It insists the bank still needs to honour its obligations, with the state desperately needing funds.