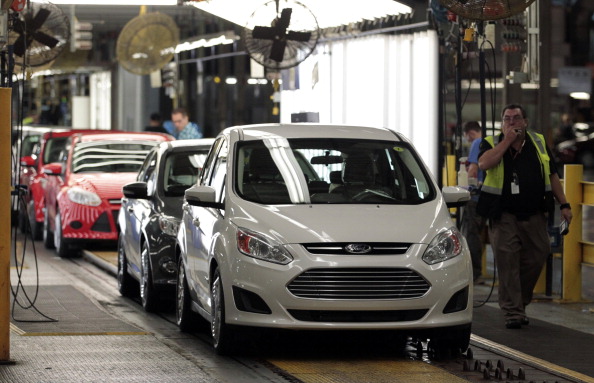 Ford Motor Co. C-Max hybrid cars reach the end of the production line at the company's Michigan Assembly Plant in Wayne, Michigan, U.S., on Monday, Oct. 7, 2013. Ford is celebrating the 100th anniversary of the moving assembly line at the plant.

According to the latest aggregated figures from the National Association of Automobile Manufacturers of South Africa (Naamsa), total industry new vehicle sales declined 9.2 percent, year-on-year, with only 40,390 new vehicles sold across all segments.

Simphiwe Nghona, chief executive of WesBank Motor Retail, in a statement said so far, every month this year had seen the new vehicle sales industry take a beating, despite positive growth in the rental channel.

“The year-to-date sales figures indicate a decline of 9.7 percent, which is in line with our forecast for the year in the current economic climate,” Nghona said.

WesBank’s data showed that the demand for new vehicles has slowed notably.

Wesbank said application volumes for new vehicles during April were down 7,1 percent compared to the same period last year, a figure that was exacerbated by sustained new car price inflation.

Nghona said although the rand seemed to have stabilised, the damage of the sustained weakness of the past few year had taken its toll on the market.

“This affects affordability, which is the biggest driver for consumers moving to the used car market. Consumers can’t control interest rates or inflation, but they can control affordability through the car they buy. In the current economic climate the used vehicle market is their best choice,” Nghona said.