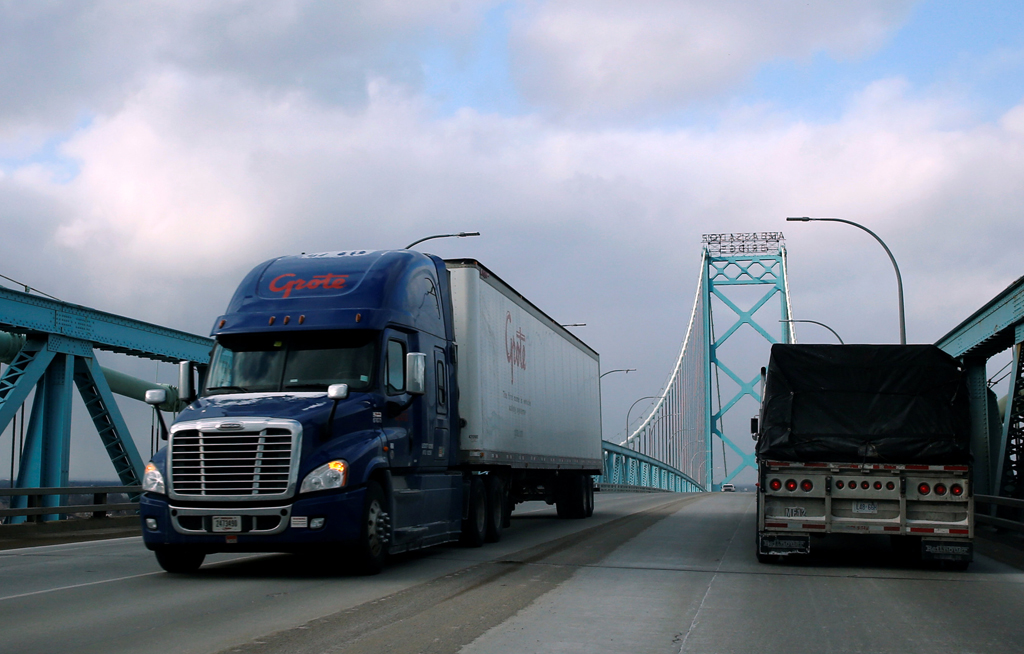 Cargo trucks cross paths the Ambassador Bridge to the US from Windsor, Ontario, Canada January 14, 2018.

DETROIT - The Detroit Auto Show got rolling Sunday with international trade and tax cuts dominating the conversation, even as carmakers raced to meet Americans&39; seemingly insatiable appetite for trucks and SUVs.

In a keynote address, US Transportation Secretary Elaine Chao touted just-enacted US tax cuts, which reduced the US corporate tax rate from 35 to 21 percent, saying the move will attract more US investment.

The show is expected to be heavy on pickup trucks and SUVs, which have been the foundation of US sales in recent years amid low gasoline prices.

Industry insiders were taking a wait-and-see attitude toward talks to revamp the North American Free Trade Agreement, which has generated fears of huge tariffs on Mexican-made imports to the US.

Negotiations have been ongoing for months at the insistence of US President Donald Trump, with the next round scheduled for January 23-28 in Montreal. Trump has threatened to abandon the agreement if a beneficial deal is not struck.

Most automakers are following the negotiations, but haven&39;t announced any changes in manufacturing plans in anticipation of NAFTA changes.

"There&39;s a good conversation going on to modernize NAFTA," said Mary Barra, CEO of General Motors, adding that the company has no announcements on shifting manufacturing capacity.

"We&39;re going to continue to interact constructively to make sure people understand the very complex nature of our business."

Ray Tanguay, an automotive advisor to the Canadian government, highlighted his country&39;s close ties to the Michigan car industry, during an address at the auto show that was otherwise focused on new technologies.

He cautioned that if the US were to untangle itself from NAFTA, car buyers would experience higher prices.

"The integration is so much that if you try to break that, you&39;re going to hurt the consumer," Tanguay told AFP.

Analysts said it was difficult to know how NAFTA changes would impact the industry because so much remained unknown.

"There continues to be the debate &39;Is the president using hyperbole to get something less severe because he&39;s a skilled negotiator, or does he seriously think that we need to be exiting NAFTA,&39;" said Cox Automotive economist Jonathan Smoke.

"I think a lot of manufacturers are effectively saying it&39;s tough to scenario plan in detail because the range of potential options is so enormous that where do you begin?"

US auto sales dipped slightly in 2017 for the first time since the financial crisis but remained at a solid level.

At a briefing with reporters, Cox analysts described the US car market as being in a "post-peak period" after steady growth following the Great Recession and two years of record sales.

While employment and consumer confidence indicators are strong, analysts highlighted tightening access to credit and the risk of higher Federal Reserve interest rates as a potential drag on future sales.

Cox projected new car sales of 16.7 for 2018, which would be a drop of 2.3 percent from last year&39;s levels. Part of the reason for the decline is due to an increase in the availability of used cars, including popular crossover SUVs that will be competing with new models.

The effects of the tax cut will be varied by region and income level, Cox analysts said. Among the clearest winners will be luxury vehicles because of the tax bill&39;s bounty to those with incomes over $150,000 a year, said economist Smoke.

Highlighting the reform, Chao pointed to Fiat Chrysler&39;s decision to move production of its Ram trucks from Mexico to an assembly plant near Detroit. The carmaker said it would invest $1 billion and add 2,500 jobs.

"This is just one example of the positive impact that the tax cuts and jobs act will have on workers, job creators, employers and our country," Chao said.

But analysts said many households still don&39;t have a clear sense of how much they will benefit from the complex changes to tax laws.

"There&39;s some people that are probably putting off purchases because they don&39;t really know... what our paychecks are going to look like," industry analyst Rebecca Lindland of Kelley Blue Book told AFP.