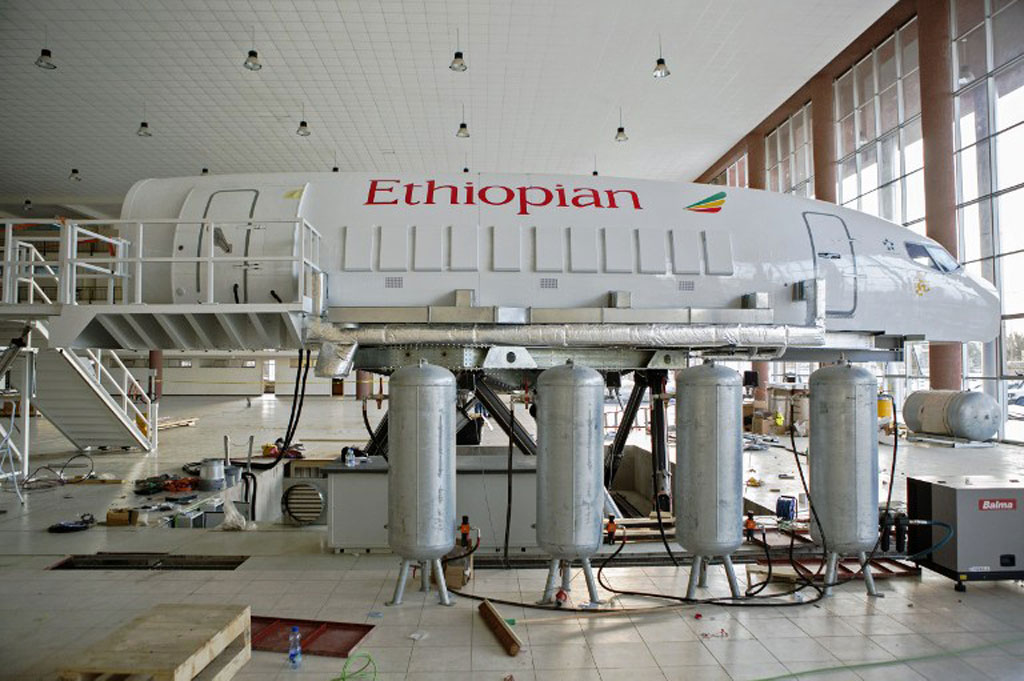 A Boeing 777 flight simulator is pictured at the Ethiopian Airlines flight academy in Addis Ababa on October 13, 2015. Ethiopian Airlines, founded in 1945 and currently employs more than 550 pilots, is one of the fastest expanding African airlines.

ADDIS ABABA – It has survived a revolution, famines, political instability and the partition of a country. Today it is a thriving institution that employs thousands and generated US$ 1.7 billion in 2015.

Ethiopian Airlines (ET), the national air carrier of Africa’s second most populous nation, is celebrating its 70th anniversary starting this month, showcasing its history, its current achievements and future vision with a series of exhibitions and guided tours of its facilities.

The airline, established as a joint venture between the Ethiopian government and the US airline company Trans World Airlines (TWA), made its first commercial flight on April 8, 1946, with a US Airforce surplus Douglas C-47 Skytrain flying from Addis Ababa to Cairo, Egypt.

Staffed mainly by foreigners at the beginning, ET has steadily increased local employment. In 1957 the first solo flight by an Ethiopian aircraft commander was made. The same year it flew its first European route, to Frankfurt, Germany. And in 1960 it flew the great late marathon runner Abebe Bikila back to Ethiopia following his barefoot victory in the Rome Olympic Games.

Ethiopian Airlines has passed other milestones, including transporting many African leaders to Addis Ababa for the launch in May 1963 of the Organization of African Union (OAU), later to become the African Union (AU).

In February 1973, the airline flew its first East Asian route, to Shanghai in China, a closed communist country at that time.

In June 1998, it made its first flight to North America, to Washington DC, which houses the largest Ethiopian community outside of Ethiopia, while in July 2013, Ethiopian Airlines flew for the first time to Sao Paulo, Brazil, its first destination in South America, which many African air carriers have not ventured to.

It also has daily flights to Johannesburg which started in June 1993, almost a year before South Africa’s first fully democratic elections and also now flies direct to Durban and Cape Town.

South Africa has a large Ethiopian community, both legal and illegal, roughly estimated at tens of thousands, while trade and investment between the two countries is also growing.

While ET over the years has expanded its service to reach to 93 international and 19 domestic destinations, it has also expanded its fleet. Claiming it provided the first jet service on the continent in 1962, it has managed to keep apace in the cutthroat world of aviation, while many other carriers, especially African, have struggled or ceased to exist.

Its website claims it is the most profitable airline in Africa and that last year its profits exceeded those of all other African airlines combined.

Tewolde Gebremariam, CEO of ET, however, said the aircarrier wasn’t content with its current status and in 2010 launched a 15-year plan called “Vision 2025” which included expanding its destinations and its fleet. It has exceeded key milestones towards its targets.

“We used to be primarily a cargo and passenger aircarrier, but with the world economy in flux and periodic outbreak of diseases like Ebola creating problems, we looked into other sectors,” he said, adding that it had strengthened its Maintenance and Repair Operations (MROs), and had created an aviation academy and a catering services company.

ET says it is training students from other African countries, especially through its aviation academy and MRO division, saving those airlines much needed cash from not having to train their personnel in Europe.

Its MRO division has also largely been able to maintain its aircraft fleet, saving it much needed finances.

The airline has just spent another US$120 million on expanding its motor maintenance services, has built three new MRO hangars, spent US$100 million for ground operation services like pilot and flight hostess training and expanded its catering services at a cost of US$2.5 million to increase its daily food production from 23,000 inflight meals daily to 80,000.

ET expects the catering expansion to be finished in two months time.

All these extra facilities are being built on its premises at Addis Ababa Bole International Airport.

While Ethiopian Airlines will probably continue to bag awards for its customer care and its expanding list of destinations, Gebremariam hinted that its biggest asset was its contribution to the Ethiopian government’s export drive.

With Ethiopia planning to dramatically increase its export of perishable items like flowers, fruits and meats, a new cargo terminal is being built at a total cost of US$650 million to increase annual cargo holding capacity by 600,000 tons to 1.2 million tons.

Gebremariam said the airline could not only can help meet the country’s development goals, but indirectly boost employment and tourism potential.

But he recently told visiting Ethiopian parliamentarians that the airline could only do so much, pointing out how far Ethiopia still had to go in developing its roads, water, electricity and telecoms.

He said Ethiopian Airlines was also be keen to further its interests in other airlines, with stakes already in West Africa-based aircarrier ASKY airlines, Air Malawi and Air Rwanda.