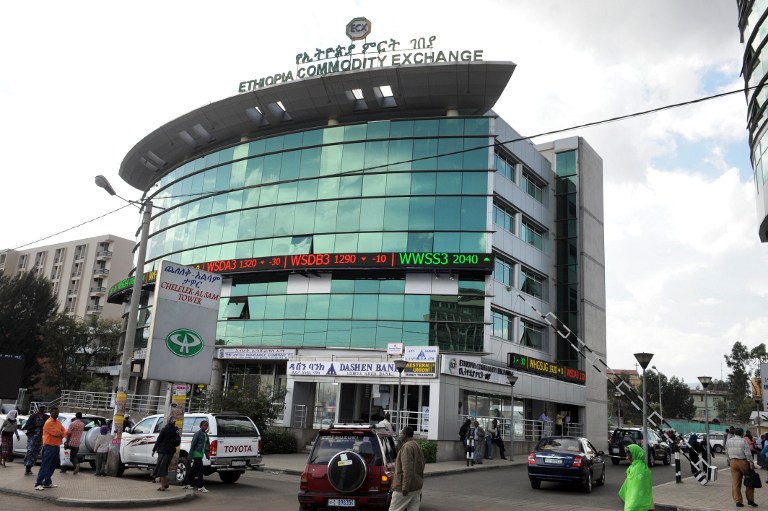 File: Ethiopia is experiencing strong economic growth, estimated by the IMF and the World Bank at nearly 10 percent annually over the past decade.

DONI - Outside a small store on a dirt track in the remote Ethiopian town of Doni, long queues wait for government cash handouts by the most modern of methods: mobile phone.

Ethiopia, Africa&39;s second most populous country and one of its fastest growing economies, is pushing a new electronic payment service by phone -- called M-Birr, or "mobile-money" -- in a bid to bring millions into the banking system and financial services.

Here in Doni, a remote town of some 5,000 people, 130 kilometres southeast of the capital Addis Ababa, signs displayed for M-Birr testify to the popularity of this new service.

Government "safety net" social security payments to some of the poorest people are now transferred with a few key strokes.

The service cuts out cumbersome bureaucracy, that previously forced customers to travel long distances and spend time waiting for requests to be processed, sometimes having to return the following day to collect the cash.

"We have five agents in the city. People come into one of these stores and get their money immediately."

Created by Irish company MOSS ICT, the service was launched in Ethiopia early 2015, in collaboration with several banks and five Ethiopian micro-finance institutions.

Authorities have quickly realised the potential of the technology to simplify the distribution of social benefits.

"People have a PIN number, and they must show their beneficiary card, so there is no risk of fraud," said Yves Dublin, from the UN children&39;s fund Unicef, which provides technical support.

"This technology avoids cases of &39;ghost&39; beneficiaries that we see with other programmes."

It follows in the footsteps of neighbouring Kenya, whose M-Pesa service run by British telecom giant Vodafone&39;s subsidiary Safaricom has become a leading force in the sector.

Users are encouraged to create a bank account to avoid losing up to a fifth of the monthly allowance offered -- an average of 137 birr ($6) a month -- in transport costs to collect the cash.

The innovation therefore not only improves the distribution of social security benefits, but also paves the way to opening up a potential market of tens of millions.

"Working in social projects also helps us to develop our network of agents," said Thierry Artaud, the M-Birr manager.

"It&39;s a way to get people to use bank accounts, to understand what are savings, what are interest rates."

That&39;s key for the country&39;s economy, for the banking system is as yet hugely underdeveloped.

Less than a fifth of Ethiopians had a bank account in 2014, against three-quarters in neighbouring Kenya, according to the World Bank.

But Ethiopia is experiencing strong economic growth, estimated by the IMF and the World Bank at nearly 10 percent annually over the past decade.

Since the overthrow of a Marxist junta in 1991, Ethiopia&39;s political and economic situation has stabilised, although rights groups have criticised the government for suppressing opposition.

The economy is still heavily dependent on agriculture, especially coffee, with the vast majority of the country&39;s workers involved in the sector.

Officials look south to Kenya for an example of the potential -- the mobile money system there has nearly 18 million users.

But the development of the banking sector still faces challenges within Ethiopia&39;s tightly controlled economy.