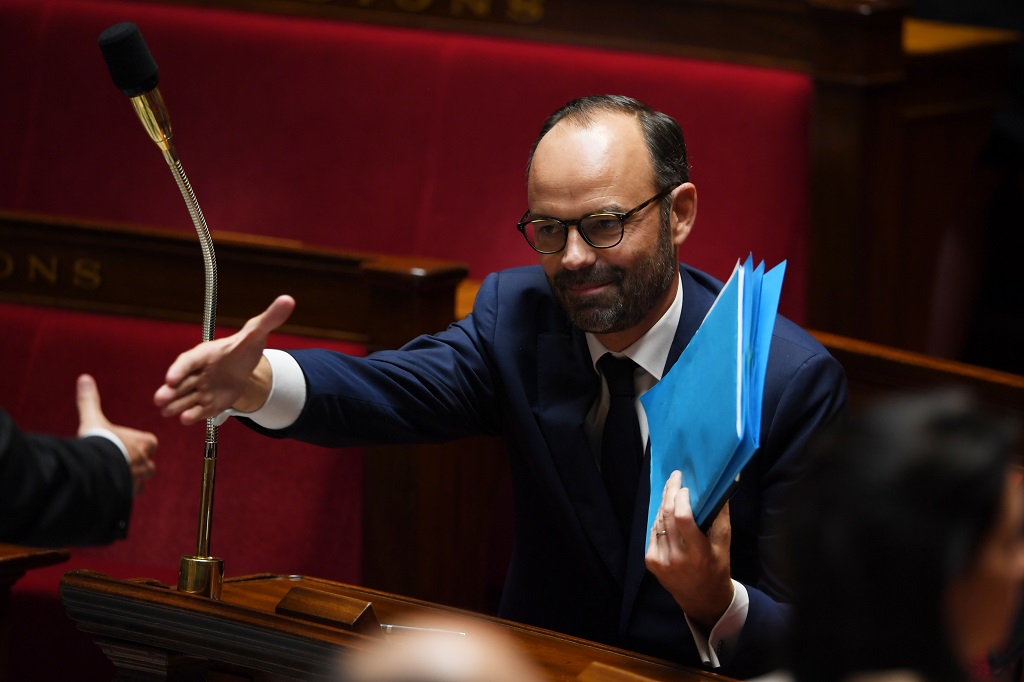 French Prime Minister Edouard Philippe shakes a lawmakers' hand after winning a vote of confidence following his address of general policy speech before at the National Assembly on July 4, 2017 in Paris.

Philippe put spurring entrepreneurship at the heart of his first policy speech to the National Assembly after presidential and parliamentary elections in May and June.

The government sailed through a vote of confidence held afterwards, with 370 MPs in the lower house backing it and 67 opposed. There were 129 abstentions.

"Businesses must want to set up and develop on our territory rather than elsewhere," Philippe told the MPs, announcing that corporate tax would be cut from 33 percent to 25 percent in the next five years.

Tackling France's "addiction to public spending" was a priority, he said, warning that the public debt now totalled 2.1 trillion euros (R31.5-trillion), nearly the equivalent of an entire year's economic output.

"We are dancing on a volcano that is rumbling ever louder," Philippe told the newly elected lower house.

He announced plans to cut public spending - currently 56 percent of GDP, one of the EU's highest levels - by three points and bring the budget deficit in line with an EU limit of 3.0 of GDP this year for the first time in a decade.

He did not, however, detail the some 4-billion euros in cuts needed to meet the deficit target, but said some planned tax cuts would be postponed.

The leader of the radical left France Unbowed, Jean-Luc Melenchon, accused Macron of pushing a liberal EU-backed line that "is sinking France and strangling Greece".

"We did not elect Mrs Merkel!" the firebrand Melenchon told the assembly, referring to austerity advocate Chancellor Angela Merkel of EU powerhouse Germany.

Almost all of the measures laid out on Tuesday confirmed election promises made by the 39-year-old centrist President Emmanuel Macron, who was elected France's youngest ever president in May after promising to modernise the country.

The government has already set out one of his boldest reforms: an overhaul of France's rigid labour laws, which will give companies more powers to negotiate conditions directly with their employees, skirting industry-wide deals.

The government will face little difficulty in passing legislation in the lower house of parliament where Macron's new Republic on the Move (REM) party won more than 300 out of 577 seats in last month's election.

The upper-house Senate, where rightwing Republicans hold a majority, will be trickier.

Philippe said on Tuesday that the government would also honour other campaign pledges including introducing a new national service for young people, making dental and eye care free on the health system and creating 15,000 new spaces in France's overcrowded jails.

Other measures include raising the price of cigarettes progressively to 10 euros from their current level of 7 euros to fight smoking-related diseases, the leading cause of preventable deaths in France.

Philippe's announcements came a day after Macron convened a rare sitting of both houses of parliament in Versailles for a novel US-style "state of the nation" address in which he pledged to restore France's "conquering spirit".

He said he would slash by a third the number of MPs, telling the around 900 Assembly and Senate members present he would call a referendum if they did not agree to the measure.

Since taking office Macron has held court twice at the former royal palace in Versailles - he hosted Russian President Vladimir Putin there for talks in May - and given only one media interview, drawing accusations of being aloof, monarchical or even "pharaonic".

He still enjoys positive ratings, however, with slightly more than half of respondents in recent polls expressing a positive view of him.