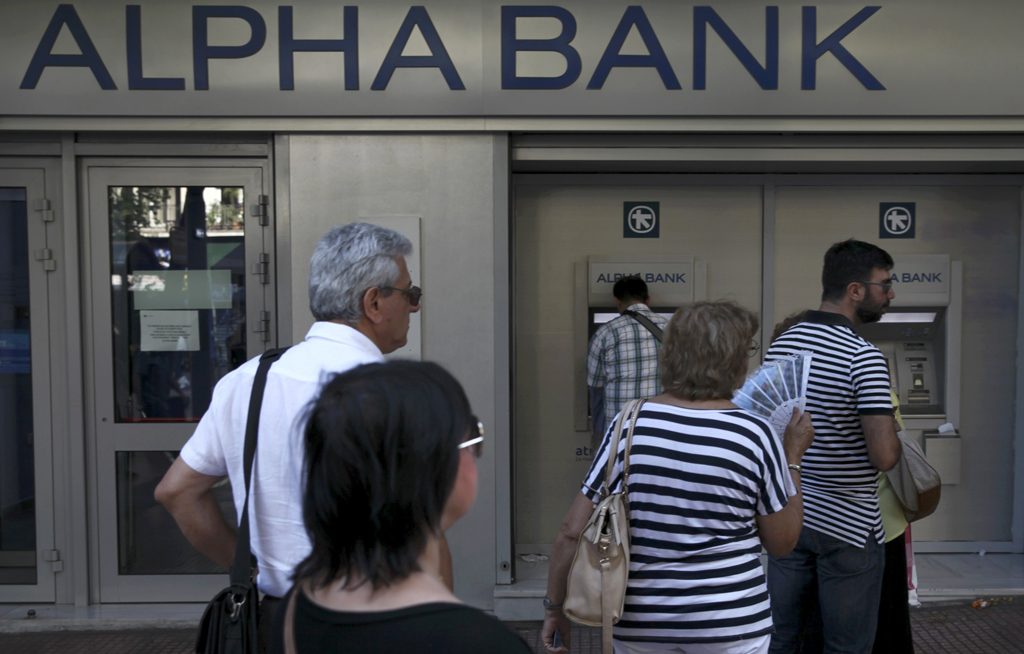 People line up at an ATM outside an Alpha Bank branch in Athens, Greece July 15, 2015. Greek banks will remain closed through to Thursday, the finance ministry said ahead of a parliamentary vote over tough austerity measures demanded by Greece's creditors

WASHINGTON - Critical talks on easing Greece's massive debt burden remain fraught with conflict, despite assurances from the International Monetary Fund on Thursday that the sides are closer to an agreement.

A deal to secure debt relief for Athens from the eurozone is the missing piece to unlocking loans the country needs to make debt payments and begin to recover from the years-long crisis.

But transcripts of part of the recent discussions between the IMF, the European Central Bank and eurozone finance ministers published by Greek financial website Euro2day on Thursday show many disputes remain and few of the participants are satisfied, least of all Greece Finance Minister Euclid Tsakalotos.

He slammed one of the proposals floated in the discussions the "worst of all worlds" for Greece. "I don't think anyone here can say that is a good deal for us, who have negotiated in good faith."

This seems to contradict comments from an IMF official on Thursday, who said the differences are narrowing even though the fund needs more specifics on a debt relief plan before it can agree to release more financing.

In contrast, the IMF's main negotiator, Poul Thomsen, said he was "very far away from being able to tell our board that we are close to a strategy we can agree to" on debt relief, according to the transcripts.

Greece's debt mountain stands at a towering 180 percent of annual output, the legacy of a crisis that brought panic to the markets and nearly forced the country out of the euro.

The sides early this month announced an agreement on a package of reform measures, including on the tax and pension system, that has since been approved by the Greek parliament.

The deal was aimed at unlocking the next tranche of aid from Europe from the third, 86-billion-euro ($94 billion) aid deal Greece and its creditors secured in July 2015.

Germany however will not agree to release the loan unless the IMF participates, and the fund will not participate unless there are more details on debt relief, even if the final structure is not revealed until years from now.

The sides failed to reach a debt agreement in the meeting in Brussels on Monday, and there is "no possibility of IMF participation" without assurances that Greece's debt will be sustainable, Rice said.

Eurogroup president Jeroen Dijsselbloem floated the possibility of the IMF approving a loan for Greece, but withholding disbursement of the funds until it had sufficient details on the debt relief -- something virtually unheard of in IMF aid programs.

Thomsen said it was an "interesting proposal" that he could raise with the management, even while Tsakalotos slammed the idea.

One advantage to the unusual arrangement, were the IMF to agree, is that it would take the discussion of Greek debt relief out of play in Germany's election in September. The German public is hostile to more financial support for Athens.

Rice vehemently denied doing any political favors for Germany. "We are exploring all options within our existing practices and rules," he said.

IMF lending depends on each country's circumstances "but we try to be as flexible as we can," he added.

German Finance Minister Wolfgang Schaeuble called the lack of a deal at Monday's talks "a major failure," and said "I'm not very optimistic that things will improve."

The IMF also disagrees with Europe's forecasts for Greek growth and primary fiscal surplus which are key to the debt discussions, Rice said.

Europe continues to forecast a surplus excluding debt payments of 3.5 percent of GDP even after 2022, which the IMF believes is not sustainable and would impose undue hardship on the country.

Athens could better use its budget to fuel growth and "Greece cannot grow while maintaining such a high surplus," Rice said.

"It does not help anyone to have assumptions that are overly optimistic."