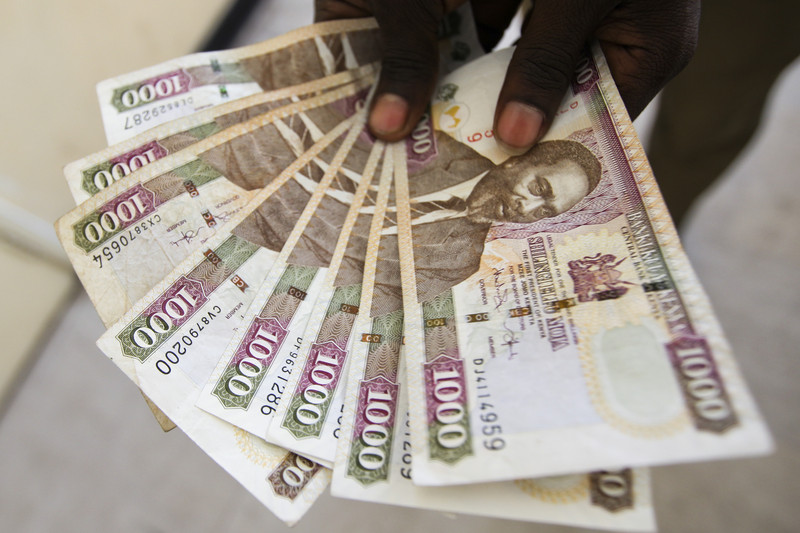 File: A picture of Kenyan Shilling.

NAIROBI – Kenyan Deputy President William Ruto has issued a tough warning to errant banks in Kenya, saying they will be “eliminated”.

Ruto said the Central bank of Kenya (CBK) had clear instructions to rein in banks that did not play by the rules.

“The central bank has clear instructions to streamline the operations of banks to eliminate those not playing by the rules,” he told an Energy Awards Gala event in Nairobi.

The remarks come at the height of woes bedeviling some banks in Kenya, a situation that has seen some banks go under receivership and liquidation.

The banking crisis has caused panic among depositors and some depositors have engaged in panic withdrawals, resulting in an appeal to Kenyans by central bank governor Patrick Njoroge to stop withdrawing their money from banks.

Meanwhile eight executives of the Chase Bank (under receivership) and National Bank of Kenya (massive losses in profit) are still at large two days after the inspector general of police issued an arrest warrant for them following revelations of unethical behaviour by the bank managers.

In Cytonn Investments’ banking sector report for 2015 titled “A Sector in Volatile Transition”, Cytonn notes that the CBK has tightened its regulations on banks with emphasis on transparency on lending rates, governance, and capitalisation.

The report says in addition to this the CBK has maintained a moratorium on licensing new banks which came into force in Quarter 3 of 2015.

“With the huge number of commercial banks, currently at 42, we expect a strain on the thoroughness and diligence of the regulatory supervisor CBK,” says Cytonn.

The report gives a grim picture of foreign banks operating in Kenya, saying they face a tough future and are losing out to local banks because they are unwilling to “adjust global strategies to local requirements”.

“Only those who have a clear strategy and understand the local banking will weather the storm,” says the Cytonn report, adding that Kenya is entering a period of “natural consolidation in the banking sector”, with banks having the choice to exit or be bought out.

“With the impending exit of Barclays Plc from Africa it has brought to the forefront displacement of foreign banks from their perch as the key providers of banking solutions, evidenced by the receptiveness of local banks to the rapidly evolving banking landscape in terms of mobile money, agency banking, and informal sector banking,” says the Cytonn report.

The CBK on Thursday placed the troubled Chase Bank under receivership. The Kenya Deposit Insurance Corporation (KDIC) was appointed as receiver for Chase Bank Limited for a period of 12 months, the CBK said in a press statement.

“The CBK is mandated to appoint the KDIC as a receiver of a bank, if, among others, an unsafe or unsound condition to transact exists; a bank is likely to fail to meet its financial obligations; a bank has substantially insufficient capital; or if there is a violation of any law or regulation,” the CBK said in a statement.

“Chase Bank Limited experienced liquidity difficulties following inaccurate social media reports and the stepping aside of two of its directors. Consequently, it was not able to meet its financial obligations on April 6, 2016.”

Chase Bank had earlier on Wednesday tweeted that social media rumours warning about trouble at the bank were “malicious and irresponsible”, only to issue a press statement a few hours later on the same platform informing the world that the bank’s two top officials had resigned.

Last week the board of the National Bank of Kenya suspended six top managers, including chief executive Munir Ahmed, accusing them of mismanagement which led to the loss of sh1.2 billion (US120 million) in 2016, down from a profit of sh3.3 billion (US30 million) in 2015.

The closure of Imperial Bank in 2015 as a result of “unsafe and unsound practices”, combined with the recent happenings at NBK, BBK, and now Chase Bank, has raised questions over the state of corporate governance in the Kenyan banking sector.

Meanwhile the Employment and Labour Relations Court in Nairobi has stopped Barclays Bank from closing down its Africa regional office in Nairobi.

Judge Monica Mbaru restrained the bank from doing so pending determination of an urgent case lodged by 21 employees fired by the bank.