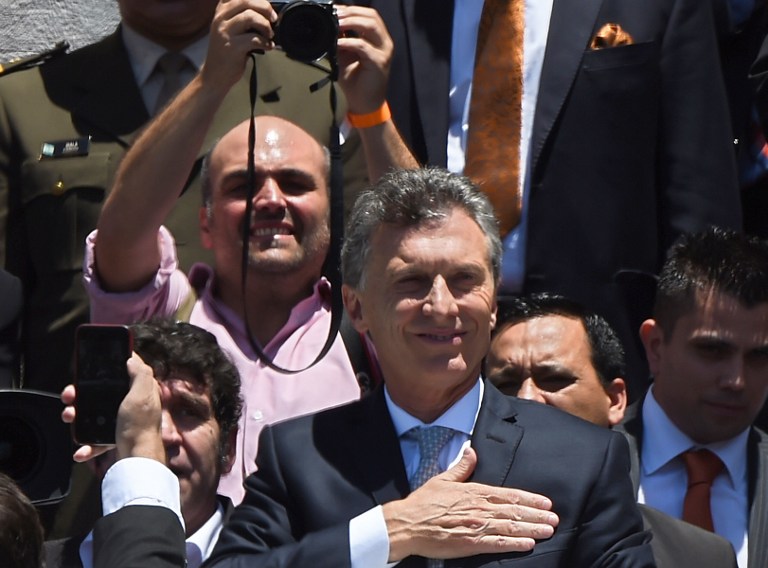 Argentine President Mauricio Macri gestures outside Congress after sworning in on December 10, 2015 in Buenos Aires.

That was an even sharper fall than during Argentina&39;s financial crisis in 2002, when it had to be bailed out by the International Monetary Fund.

Macri says a sharp adjustment is needed to make the country competitive, though economists as well as his political opponents warn it will hurt Argentines&39; purchasing power in the medium-term.

"There is a sense of relaxation, aside from the critical economic situation," said political analyst Gustavo Cordoba.

"One week into its term, the government&39;s record is very positive."

But cheaper pesos mean ordinary Argentines will be able to buy less.

Labor unions demanded the government give vouchers for workers at Christmas to compensate for having their spending power slashed by the currency reforms and by soaring inflation.

And small domestic producers have warned that freeing up exports and imports will drive them out of business.

"We will have to wait and see what measures the government takes to stop people&39;s salaries evaporating and more marginal sectors being impacted," Cordoba warned.

The currency reform was the most dramatic of Macri&39;s measures since taking office on December 10.

He has also axed a controversial tax on agricultural exports including grain and meat. And he lowered the tax on another major export: soybeans.

"We are racing against the clock. We have no time to lose," he said, announcing those measures.

"The world doesn&39;t give out presents and neither do we. This is an incentive for investment and innovation."

The freeing up of Argentine farmers&39; stockpiles raised fears on world markets that they would be flooded with cheap Argentine produce. European grain prices fell after Macri&39;s announcement.

Exporters welcomed the agriculture reform. Farmers called them a historic move that could lead them to sow 30 percent more wheat and corn next year.

The free floating of the currency meanwhile is likely to boost Argentine exports further by making them cheaper.

"By lifting capital controls and devaluing the currency, the new administration will have tackled the most obvious distortion in Argentina&39;s macro-policy framework," wrote Neil Shearing of research group Capital Economics.

"The economic benefits, however, may not materialize until well into next year," he added, in a note.

Popular anger erupted against the new government in some quarters however.

Tens of thousands demonstrated outside Congress on Thursday against Macri.

"We have to defend what was done in recent years to combat the advance of neoliberalism," said one demonstrator, Nicolas, who would not give his last name.

One of Macri&39;s measures has failed meanwhile, in a sign of the political challenges he faces with an opposition-dominated Congress.

He tried to appoint two new Supreme Court judges by decree but was forced to back down by widespread opposition.

Argentine stock prices plunged by more than four percent on Friday. They were down by 10 percent overall on the week.

Media cited investor uncertainty over the reforms, though Eduardo Blasco, an analyst at consultancy Maxinver, dismissed any link to the dollar change.

"When things are this volatile it is best to analyze in the medium term."