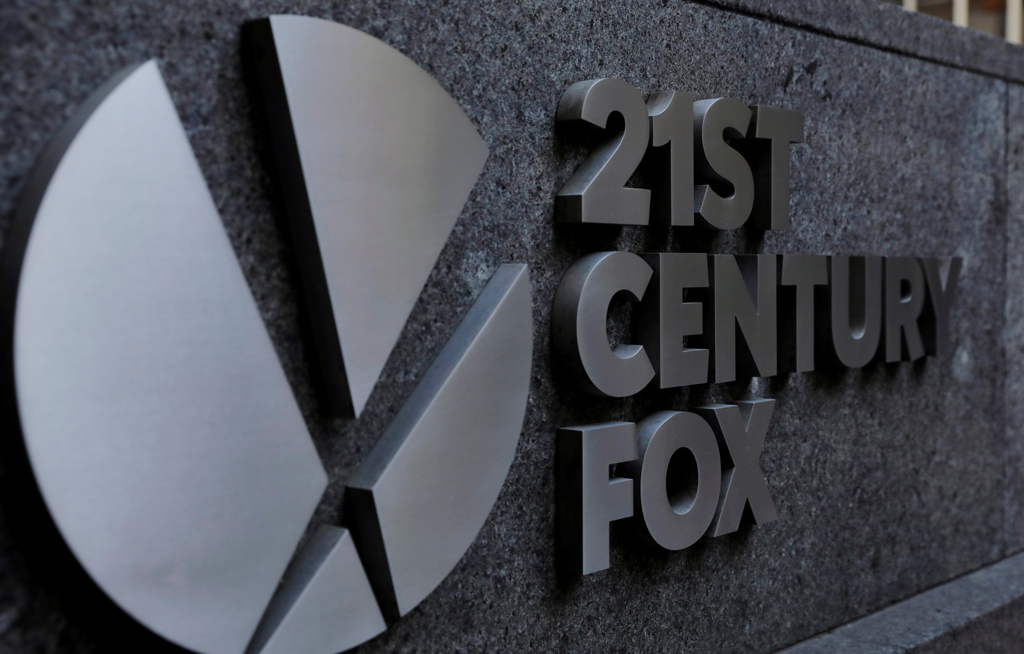 FILE PHOTO: The 21st Century Fox logo is displayed on the side of a building in midtown Manhattan in New York, US, February 27, 2018.

Fox, which has been trying to buy the pan-European group since December 2016, offered to pay 14 pounds per share, a 12 percent premium to Comcast&39;s offer, but below the 15.05 pounds Sky shares were trading at on Wednesday.

Analysts said the bid threw down the gauntlet to Comcast, the world&39;s biggest entertainment company, to return with a higher offer.

The U.S. cable group gatecrashed Murdoch&39;s attempt to buy the 61 percent of Sky his group did not already own in February when Fox was still firmly stuck in the regulatory process.

One top-40 Sky shareholder said they expected Comcast to come back with a counter bid for Sky.

"The end price really depends on the appetite of those companies and how much they are willing to take their leverage up and at what stage their shareholders say enough is enough," the shareholder, who did not wish to be identified, said.

The fight for Britain&39;s leading pay-TV group is part of a bigger battle being waged in the entertainment industry as the world&39;s media giants splash out tens of billions of dollars on deals to be able to compete with Netflix and Amazon.

Comcast and Walt Disney are locked in a separate $70 billion-plus battle to buy most of Fox&39;s assets, which would include Sky.

Disney secured conditional US approval to buy the assets last month, giving it an edge over Comcast&39;s bid.

"Today&39;s Fox bid is unlikely to be the end game as we see a final Sky deal outcome at well over 15 pounds per share," said managing partner Michael Wegener.

Present in 23 million homes across Europe, Sky is a prized asset, with a slate of top sport and original drama content.

"This transformative transaction will position Sky so that it can continue to compete within an environment that now includes some of the largest companies in the world," Fox said.

Its offer represents an 82 percent premium to Sky&39;s shares in 2016 before the takeover drama started, and a multiple of 21 times 2017 earnings per share.

Sky&39;s senior independent director Martin Gilbert welcomed the move. "This offer reflects the strong position the business is in and is an attractive premium for shareholders," he said.

However, British regulators have indicated that if Disney succeeds in buying Fox, including the 39 percent stake in Sky, it would be required to offer the same price for the remainder of Sky. According to some shareholders, that has set an implied higher floor for Sky&39;s shares.

Hedge funds including Elliott have bought into Sky in recent months and other vocal shareholders such as Crispin Odey have demanded that the independent directors secure a better deal.

"It&39;s too low," Odey, a former son-in-law of Murdoch whose eponymous hedge fund is a Sky shareholder, said of the sweetened Fox offer.

"Disney&39;s internal forecasts now, on the basis of the cash flows they&39;ve published for Sky, would value it at 16 pounds," he said.

Fox said Disney had given its consent to the additional debt Fox would take on and said that it would reimburse Fox by around 1 billion pounds if Fox succeeds in buying Sky at that price, but the Disney-Fox transaction falls through.

One hedge fund manager with a stake in Sky welcomed that pledge as a sign that Disney backed Fox in the battle.

Fox said the performance of Sky since 2016 justified its new bid. Analysts said it was not a knock-out, and Fox did not say it was its final offer.

"Fox coming back in for Sky isn&39;t a surprise in itself, but the fact the offer is slightly behind what some had anticipated brings another twist," said George Salmon, equity analyst at Hargreaves Lansdown.

The British government is expected to finally allow Fox, which is run by Rupert&39;s son James, to buy Sky this week, after the U.S. group agreed to sell Sky&39;s award-winning news channel to Disney to prevent Murdoch from owning too much of the British media.

Murdoch had previously tried to buy Sky in 2011 when a phone hacking scandal at his News of the World tabloid sparked a political backlash over his role in Britain. The opposition has not completely subsided despite the plan to spin off Sky News.

"There are enough sub-plots in the race to acquire Sky to commission a prime-time drama," Salmon said.