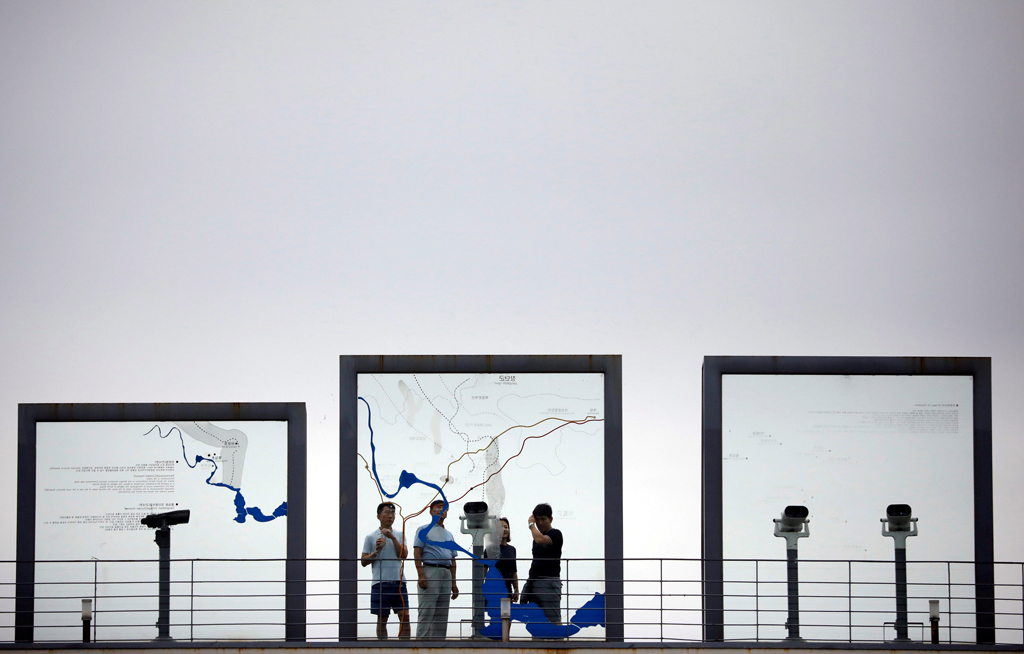 People look toward the north at an observation platform near the demilitarized zone separating the two Koreas in Paju.

Pyongyang fired the missile over Japan and into the Pacific Ocean, in a major escalation that triggered global alarm and a furious response from Tokyo.

Investor sentiment was also battered by monster storm Harvey in Texas, where it swamped streets and highways with unprecedented rainfall.

"Any increase in geopolitical risk, particularly involving North Korea, triggers a move to safety in markets as investors become increasingly concerned about the potential for things to escalate rapidly.

"The damage caused in Houston is also weighing on sentiment, due to both the sheer devastation it has caused and the uncertainty over the cost and economic impact."

The shock developments sent investors fleeing for traditional safe-haven assets like the yen, gold, and US treasuries.

The yen surged to four-month dollar peak and precious metal gold forged a path to a nine-month pinnacle at $1,326.16 per ounce.

The euro topped $1.20 for the first time since January 2015, as traders also bet on the winding down of eurozone crisis-era stimulus measures and eyed growing economic optimism in the region.

"The main beneficiaries have been US Treasuries, gold and the yen as investors flock to safety at least near term."

At the same time, the greenback has been hampered by ongoing uncertainty over US President Donald Trump's tax-cutting plans, as well as North Korea developments.

"Euro/dollar has hit its highest level since the first trading day of 2015 today and broken through the psychological $1.20 level along the way," added Erlam.

"It seems geopolitical risk and the devastation in Houston have turned people away from the dollar."

The greenback had already been suffering selling pressure as expectations for another Federal Reserve interest rate rise faded in recent weeks.

Meanwhile, Tuesday's missile test is the latest in a series of recent provocations by Pyongyang, testing US President Donald Trump, his South Korean counterpart Moon Jae-In and Japanese Prime Minister Shinzo Abe and raising fresh fears of conflict with the nuclear-armed nation.

Back in the US, Harvey had battered into Texas as a Category Four hurricane on Friday, tearing down homes and businesses on the Gulf Coast, and triggering massive floods. It was later downgraded to a tropical storm.