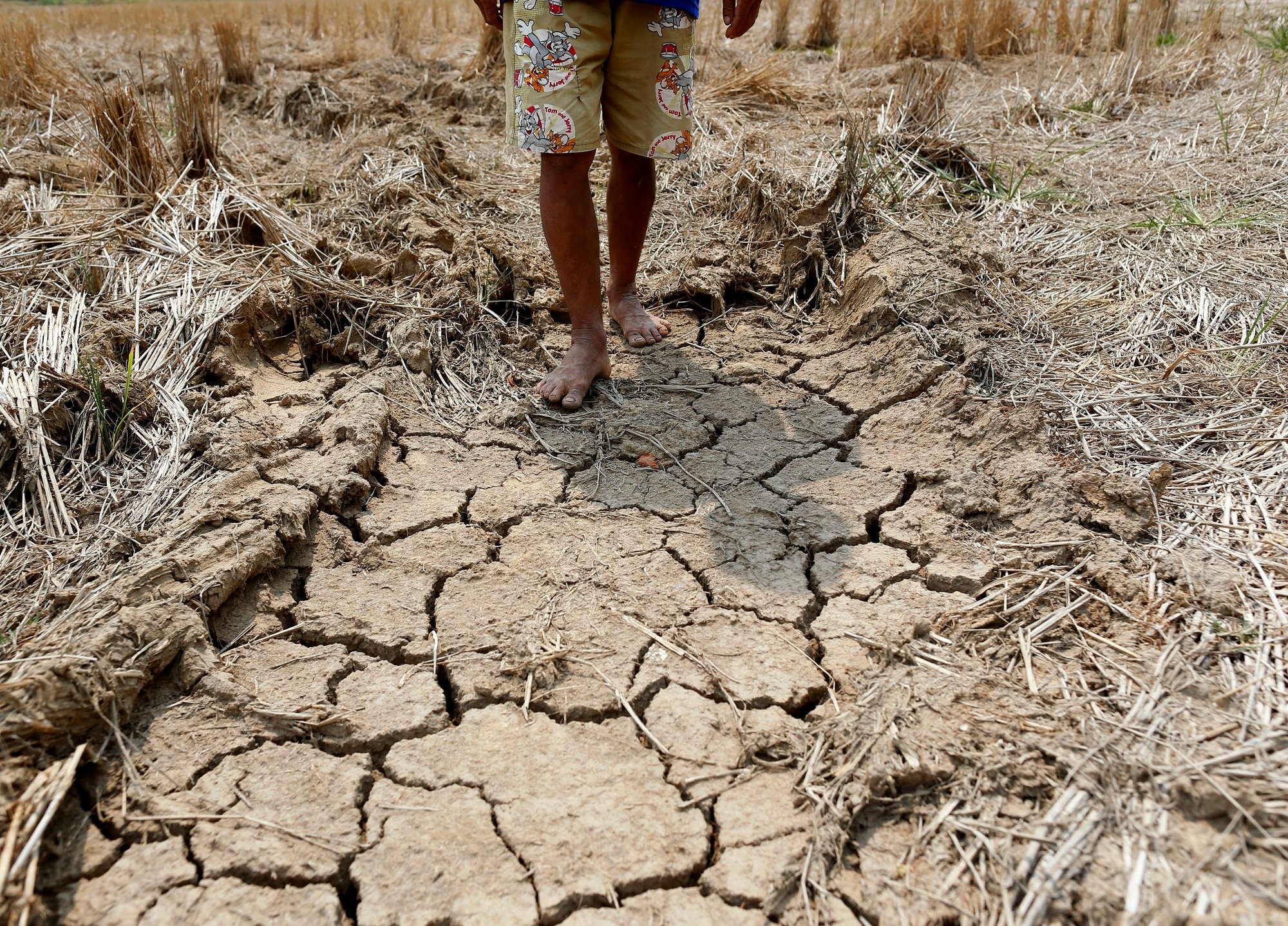 A Thai farmer walking with his bare feet on drought parched land after harvest at a rice paddy field in Chachoengsao province, Thailand.

BANGKOK - Thailand has long served as one of the globe&39;s main rice bowls, but chronic water shortages are pushing the country to move away from a grain that dominates its fields and has defined a way of life for generations.

Laddawan Kamsong has spent the past forty years coaxing rice from her plot in central Thailand, but she is tired of watching her farmland squeezed dry by increasingly severe droughts.

"I plan to replace some rice paddies with limes," she told AFP after attending a government-run workshop urging farmers to diversify their crops.

Thailand is one of the world&39;s top rice exporters.

But four consecutive years of below-average rainfall have drained water reserves and strangled production, pushing many farmers into debt.

The current drought, the worst the country has seen in decades, has hit nearly a third of Thailand&39;s 76 provinces, particularly in the rice-heavy central and northeast.

The kingdom&39;s military government is now organising training sessions to encourage millions of rice farmers to diversify into crops that require less irrigation.

Unlike nearly all other crops, rice grows best in a flooded field, with the stalk&39;s base completely submerged for most of the growing season.

At an army-run workshop held in patch of shade in a field in Nonthaburi province near Bangkok, Laddawan was sold the merits of cultivating fruit trees.

In other regions, they are suggesting sugarcane or peas.

These alternatives will drastically reduce water consumption but also break the monoculture that has deteriorated Thai soil for decades.

"We have no choice, we need to adapt," Laddawan said, explaining that she used to plant three rice crops annually, but next year will only have enough water for one.

As the drought bites, some 2,000 Thai villages are surviving off water delivered by the government, while &39;rainmaking&39; airplanes are flying over parched plains, sending an iodine solution into the air in an effort to seed clouds.

After last year&39;s especially weak rainy season -- which falls between June and October -- the ruling military junta asked farmers to abandon their winter rice crop, which is normally cultivated through irrigation and not rainfall.

"The amount of water in storage is low and now we expect that this year&39;s rainy season will be delayed because of El Nino," said Suphot Tovichakchaikul, who leads the country&39;s water management department.

The El Nino weather phenomenon tends to weaken the annual monsoon, which is a lifeline to farmers across the region.

According to a study from the University of the Chamber of Commerce, the drought could shave between 0.5 and 0.8 percent off Thailand&39;s GDP growth, with its annual rice production predicted to drop almost 30 percent to 25 million tonnes.

Thailand is also facing increasing competition from Vietnam and India, who have been jockeying for the top exporter spot and at times surpassed Thailand&39;s output in recent years.

The junta says Thai rice is no longer sustainable on its current scale.

"We must find a way to motivate rice producers to switch to other crops," junta chief Prayut Chan-o-Cha said in a recent speech.

His military government, which grabbed power in a 2014 coup, has struggled to revive Thailand&39;s flat economy, which is beset by falling exports, high household debt and low consumer confidence.

Yet convincing the country&39;s rice growers to change their crops is no easy task.

"It is difficult because it is their career, it is their way of life for decades conceded Somnuk Srithiengtrong, head of the Ministry of Agriculture for Nonthaburi.

In recent years rice farming has become entwined with a strong political identity too.

Many rice farmers support the family of Thaksin Shinawatra, a controversial ex-premier who injected money into villages in the kingdom&39;s long-neglected rural north and northeast.

The former telecoms tycoon was ousted in a 2006 coup.

But parties linked to him have won all Thai elections since.

His sister Yingluck, who became prime minister in 2011, also poured subsidy into the rice sector, winning the devotion of the so-called grassroots "Red Shirt" pro-democracy movement.

She was also ousted in a 2014 coup, and faces up to a decade in jail over  negligence charges linked to her rice subsidy scheme.

That policy saw the government purchase paddies from farmers at nearly twice the market rate, pumping cash into the Shinawatra heartlands.

But it led to massive rice stockpiles after global traders turned away from the Thai grain, whose price had been inflated by government hoarding.

The ruling junta has shot down the Shinawatra&39;s policies as "populist".

But it too recently resorted to massive rural subsidies to prop up the country&39;s floundering rice and rubber industries.

And while a reliance on rice looks increasingly perilous, farmers like Prateep Jinpracha, 46, say that cannot be swayed to change crops.

"Growing rice, that&39;s what my parents and grandparents did before me," she said. "This is my life."