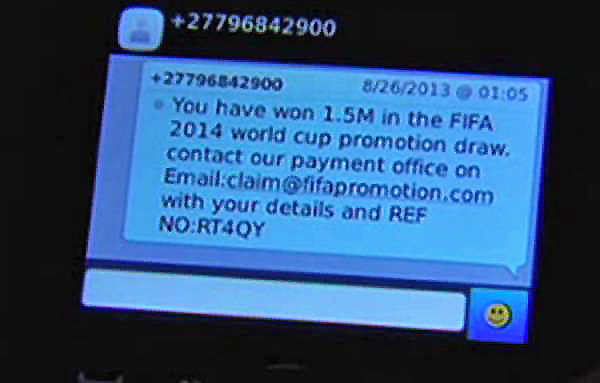 Cyber crime is on the increase. South Africa has been identified as one of the fastest-growing countries for cyber crimes such as phishing scams.

The technological era, in which smartphones enable us to have access to our bank accounts, also comes with challenges.

Smartphones are so convenient we can now manage our banking transactions without going to a bank, download information and also talk to strangers around the globe on social network at a press of a button. But they expose us to a lot of scams.

“This also places consumers at a greater risk of becoming victims of financial scams,” he says.

“As a result, it is important that consumers are aware of how to identify scams in order to avoid being defrauded.”

He says The RSA Anti-Phishing Service recorded a total of 1942 new phishing attacks in South Africa for the first half of 2012, equating to an estimated financial loss of R71-million.

In addition to this, the Symantec Intelligence Report for June 2012 identified South Africa as the second-most targeted country globally, with one in 170.9 emails identified as phishing attacks.

“South Africa has become a significant target for cyber criminals as we have the largest internet connectivity on the continent,” says Hurwitz.

He says we have heard about phishing scams but there are many other scams that don’t involve phishing which are equally dangerous.

Hurwitz says e-mails and SMSes are used to conduct what is known as “advance fee scams”.

“These communications look real and can easily trick consumers into financial losses.”

He says anyone receiving an unsolicited email or SMS, which appears to come from a legitimate source, but requests personal information, should contact that organisation directly to verify that the communication is authentic before taking any action.

Consumers who potentially fall victim to these scams are likely to ignore warnings about phishing because they don’t generally transact online, so don’t believe the warnings relate to them, he says.

The scam currently doing the rounds involves consumers receiving an SMS (or email) claiming that they have won money but, in order to receive the funds, they need to send their banking details, or deposit money into an account, he says.

“No official organisation would ask for personal details in this manner or request money to be deposited in order to receive a prize, so everyone should immediately be suspicious of this type of communication,” Hurwitz says.

With the number of innovative scams growing monthly we need to be more vigilant, he says.

Many people will not migrate to either cellphone or internet banking for fear of being defrauded. And I’m one of them.