SA trade with China up but raw material exports a concern 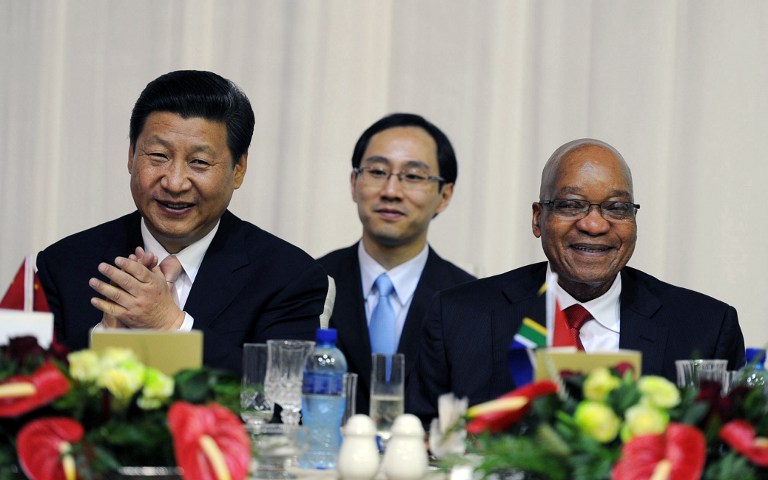 South Africa's president Jacob Zuma (R) and his Chinese counterpart Xi Jinping attend a meeting at the Union Buildings in Pretoria on March 26, 2013.

South Africa’s bilateral trade with China increased by 32% last year to R270bn from the 2012 figure of R205bn‚ but the composition of the trade was a matter of concern as South Africa’s exports comprised mainly of raw materials‚ Trade and Industry Minister Rob Davies said on Wednesday.

China became South Africa’s single-largest trading partner in 2009‚ but the trade balance has been in favour of China‚ with South Africa’s trade deficit increasing from R36bn in 2012 to R38bn last year.

“The composition of our bilateral trade remains a concern. Over 90% of South Africa’s top 10 exports to China are in raw materials while 100% of our top 10 imports from China are manufactured products‚” the minister said in a written reply to a parliamentary question by African National Congress (ANC) MP Freddie Adams.

“The South African and Chinese governments have recognised that this structure of trade is not sustainable and have agreed to work together to correct the situation in two ways: first‚ to work together to promote value-added exports to China; and to increase inward investment from China.”

Also‚ China was in the process of reorientating its economic development strategy away from reliance on exports and inward investment to one based more on domestic consumption and the development of its interior regions.

“Economies that can supply that demand will obtain growing markets for their exports‚” Mr Davies said.

The Department of Trade and Industry is promoting the export of value-added manufactured products to China‚ mainly by means of trade exhibitions.

With regard to investments from China‚ these were growing‚ but off a low base. Between January 2003 and January 2014 a total of 38 foreign direct investment projects were recorded representing a total capital investment of R13.33bn‚ or an average investment of R350.5m for each project. During the period‚ a total of 10‚992 jobs were created.

The China-Africa Development Fund has also reported that there are joint investment projects‚ particularly in the mining‚ financial‚ appliances and information and communications technology sectors.

The single-largest Chinese investment in Africa is the acquisition of a 20% stake in Standard Bank by Chinese banks.