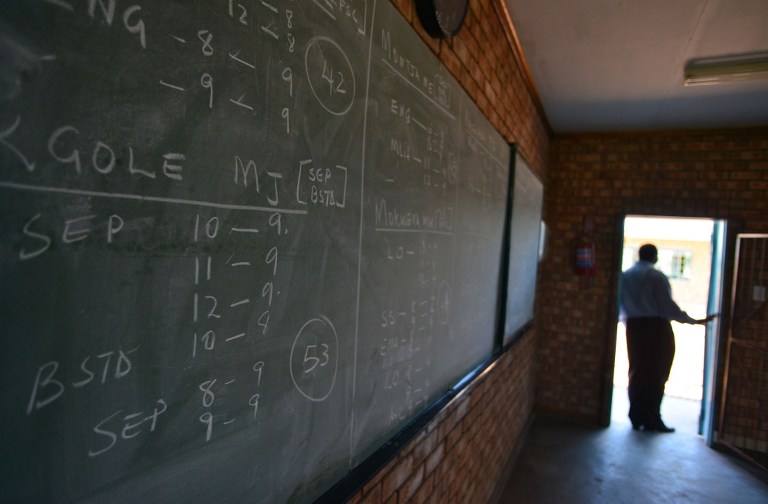 A picture shows on February 7, 2013 a blackboard at the Alapha Secondary School in Bayswater, a village near Limpopo, South Africa.

SEVILLE - While other children are at the beach or campsite for their summer holidays, eight-year-old Jose Alberto is back in the classroom in the August heat.

He comes to learn and play, but above all for the free lunch, a lifeline for many poor families hit by Spain&39;s recession.

"Things are going very badly and we need this help," says his mother, Margarita Barco, 45, arriving to pick him up from this school in the southern city of Seville.

"I am happy with a hunk of bread, but children need to eat meat and fish. They need nutrition."

In a classroom decorated with yellow and blue tiles, the summer school&39;s organiser Blanca Garcia-Tapial hands out diplomas to about 20 children, aged between six and 14.

They have wrapped up two months of summer classes with a party of games and races -- just as most children are preparing to start a new school term.

"In September I am starting secondary school and this has helped me a lot," says Jose Manuel, 12, in a white football shirt.

"Especially in grammar -- I have improved a bit with my verbs."

"I have learned to do division, which I didn&39;t know before," says another pupil, Yessina, a girl of eight with long blond hair.

Once the diplomas are handed out, the children take off their party costumes and make-up and sit down for the most important part of the day -- a lunch of gazpacho soup, fish, bread and flan.

This school in the Torreblanca neighbourhood is one of dozens to stay open through the summer.

"Some families tell us they really need their child to come here to eat," says Garcia-Tapial.

"Most of them aren&39;t starving, but they are malnourished."

The children eat with gusto round a big table. When the teachers ask if anyone wants more, numerous hands shoot up.

"Any food that&39;s left over we tend to give to the parents," says Garcia-Tapial.

Arriving to pick up Jose Alberto, his mother also takes home some leftover gazpacho soup for the family.

She and her husband, a hotel guard who lost his job in 2009, live along with their three children on 426 euros of welfare benefits a month.

Welfare groups warn that many children are suffering in Spain after five years of on-off recession.

"The level of child poverty in Spain was already high, it was already about 20 percent in 2008" when the financial crisis erupted, says Marta Arias of UNICEF Spain.

"With the crisis the figures are getting worse year by year," she adds. "Not only are there more children under the poverty line but those that are, are getting poorer."

In 2011, she says, there were nearly 2.3 million children living in poverty.

The surrounding Andalusia region is one of those hardest hit by the two-year recession in a country also enduring tough emergency spending cuts.

The unemployment rate in Andalusia has reached nearly 36 percent -- above the already high national rate of 26.2 percent.

"The schools and pediatricians are telling us there is a serious problem of malnutrition," says Magdalena Sanchez, head of social services in Andalusia&39;s left-wing regional government.

In June it launched a programme of free meals for 11,000 needy pupils in the region&39;s schools.

When the holidays came, "it was essential that there not be any reduction" in this aid, she adds -- so 56 schools opened over the summer offering classes and meals for 4,000 pupils.

"Our basic aim was to guarantee that they get fed," she says.

Other regional governments have done likewise, such as the Canary Islands and Extremadura -- both with unemployment rates close to 34 percent --which opened summer schools for 10,000 pupils.

With the summer schools winding down, families now face another challenge: getting books and equipment for the new school term.

In Seville on Friday, a band of left-wing activists raided a supermarket in broad daylight, openly stealing school supplies to distribute them to the needy.