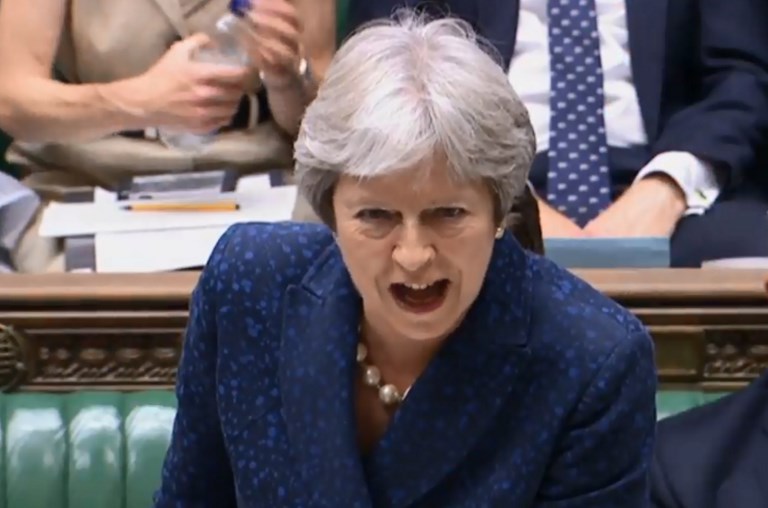 LONDON – British Prime Minister Theresa May will publish details on Thursday of her long-awaited Brexit blueprint to restart talks with the EU, after facing down a revolt by eurosceptic ministers that could still unseat her.

In a policy paper, the government will outline proposals for a free trade area and a "common rule book" with the EU in goods after pressure from businesses to allow cross-border trade to continue as normal.

Our Brexit deal for Britain respects the will of the British people. And, as Prime Minister, it is the Brexit I am determined to deliver: https://t.co/BDJY56oyxm

But Britain would still plan to leave the EU single market and customs union and set its own path on the far bigger services sector, hoping to be able to curb EU immigration and strike its own trade deals with third countries.

For the City of London the plan would propose "a looser partnership" with the EU rather than original proposals for "mutual recognition" of British and EU rules after Britain leaves the bloc in March, the Financial Times reported.

"We&39;re making sure we&39;ve got a bespoke relationship with the EU," Brexit Secretary Dominic Raab, who was only appointed on Monday after his predecessor David Davis quit in protest over the plan, told BBC radio.

READ: No vote on final Brexit deal: Theresa May

The plan has caused outrage among eurosceptic members of May&39;s Conservative party, and foreign minister Boris Johnson joined Davis in dramatically quitting this week in protest.

Their departures, followed by a clutch of junior aides, destabilised May&39;s government and revived talk of a leadership challenge against her.

The prime minister is also likely to face some opposition in Brussels, where officials have repeatedly warned Britain to lower its expectations about how close ties can be.

"Of course the EU-27 is open to compromise but not one that can undermine the main pillars of the single market," an EU official said on condition of anonymity.

An EU source said: "We will look at these things constructively, and in a way that is helpful to the prime minister."

May has briefed leaders including EU President Donald Tusk and German Chancellor Angela Merkel on her plan and reported a positive response, although they are awaiting the detail.

Britain does not have long to argue its case -- both sides are aiming for a deal by October, to allow time for its ratification by the British and European parliaments.

Failure to agree would see Britain leave the EU without a deal, with the risk of huge economic disruption on both sides of the Channel.

The Financial Times has reported that one contingency plan being examined in case of a no-deal Brexit is using barges to help keep the lights on in Northern Ireland in case there is disruption to electricity imports from the Republic of Ireland.

Britain voted for Brexit in June 2016, but May has so far been unable to present a common position to Brussels on what she wants because of deep divisions in her government.

Amid warnings from businesses that continued uncertainty is risking investment and jobs, and fears time is running out, her cabinet finally agreed on a plan last week.

The aim is to keep EU rules on goods to protect complex manufacturing supply chains, using technology to levy its own duties on UK-bound products from outside the bloc, while diverging on services.

"We need to rise to the challenge and grasp the opportunities" of Brexit, said Raab, adding that the policy represented a "balance".

But Johnson, a leading Brexit campaigner, said following EU rules without being able to alter them risked consigning Britain to the "status of colony", and said it looked like a "semi-Brexit".

Other eurosceptics who want a clean break with the bloc are also livid, prompting speculation they may launch a confidence vote against May.

Brexit-backing MPs, including leading eurosceptic Conservative Jacob Rees-Mogg, will also seek to force her hand by submitting amendments to a trade bill being debated in the House of Commons next week.

Rees-Mogg told AFP his aim was only "to help the government stick to some of its earlier promises".