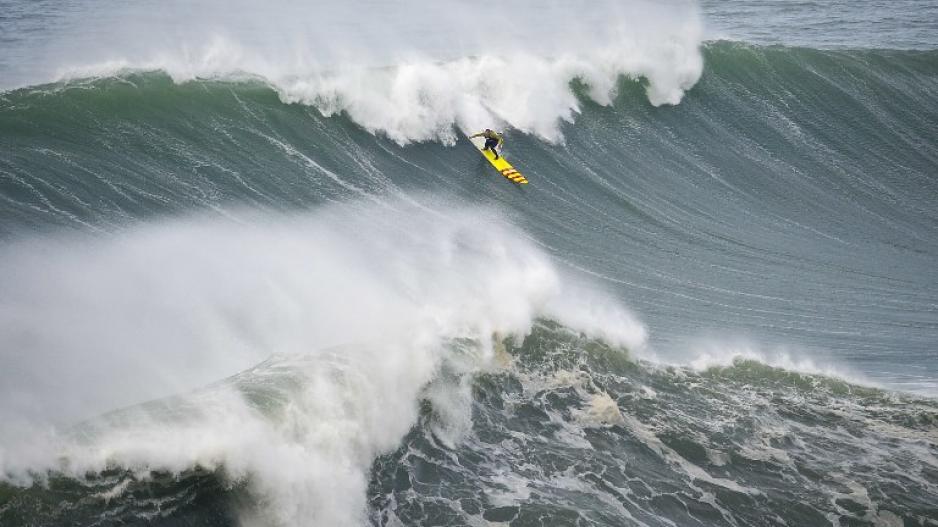 US surfer Garrett McNamara rides a wave during a surf session at Praia do Norte in Nazare on January 30, 2013. McNamara currently holds the world record for the biggest wave surfed after riding a 78-foot (23.77 metre) breaker in Nazare, central Portugal.

ST AGNES, United Kingdom - The dramatic coastline of Cornwall in southwest England is dotted with chimney stacks left over from its long-gone mining industry. But out to sea lies another legacy -- thousands of tons of tin, waiting to be mined.

"There&39;s 22,000 tons of tin there," said Mike Proudfoot, chief executive of the mining firm Marine Minerals, looking out over the stunning north Cornish coast and stretching a hand over the deep blue expanse of the Celtic Sea.

Proudfoot&39;s company has applied for a licence that could see it start extracting this lucrative resource in 2015 in a ten-year project.

But the idea has not gone down well with Cornwall&39;s surfers, who say large-scale tin mining could spell wipeout for their huge waves.

Cornwall&39;s tourist industry, the biggest employer in this ruggedly beautiful region, has also raised fears that mining could damage the fragile marine environment and pollute its pristine beaches.

The huge tin reserves are the remains of mining waste dumped in rivers in the 18th and 19th century, when the industry was in full swing. Over the years, currents carried the scraps down to the sea and ground them down into tiny grains.

Tin is used to produce an enormous range of electronic goods, from mobile phones to tablet computers. The current price of $21,000 per ton is less than the record $33,600 reached in April 2011, but still high by historic standards.

But surfers are worried that extracting the silt in large quantities will affect the local quality of the sport by eroding the sand banks that help give Cornwall its crashing waves.

"When we&39;ve seen a similar project along this stretch of coastline in the past, we&39;ve seen a really detrimental impact on the quality of surfing," said Andy Cummins, campaign director of the environmental charity Surfers against Sewage.

Surfing brings around £64 million pounds ($99.6 million, 74.8 million euros) a year to the Cornish economy and provides 1,600 jobs, according to official figures.

"The whole of the north coast of Cornwall is massively important for tourism so anything that would damage the tourism industry has to be taken really seriously," Tony Flux of the National Trust heritage body told AFP.

This is not the first time Proudfoot, a South African who has lived in Cornwall since the 1970s, has attempted to cash in on the region&39;s tin.

He made his first foray into the industry in the 1980s, but was foiled by a crash in the price of the metal.