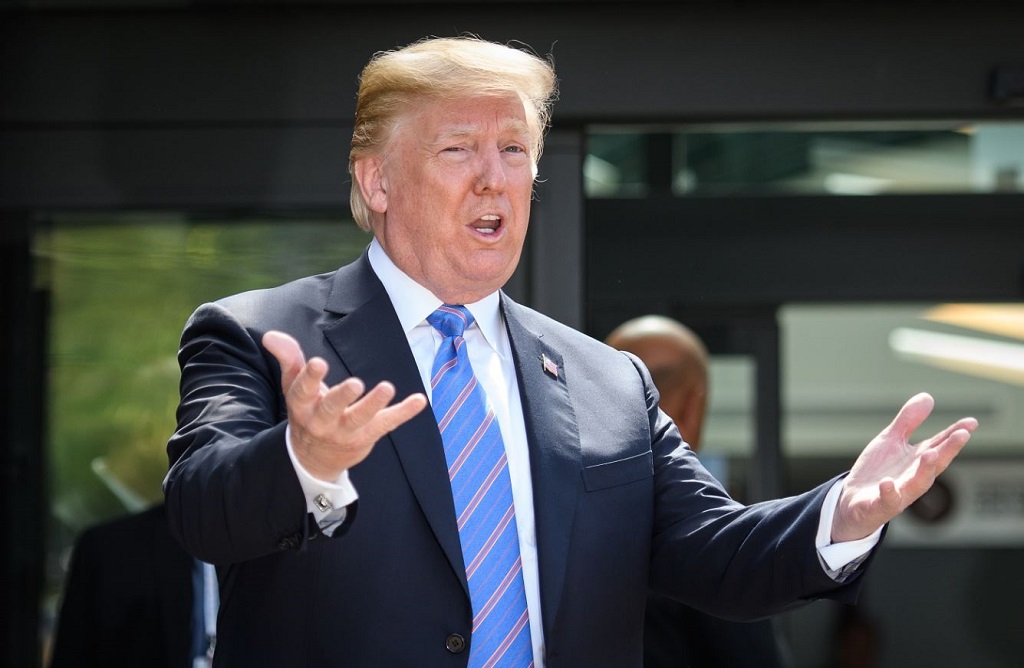 File: US President Donald Trump has invited a youngster who has been bullied in school as a result of his last name.

WASHINGTON - US President Donald Trump on Friday was due to unveil a final list of Chinese imports that would face punishing tariffs, fanning fears of a trade war as Beijing warned that it could swiftly strike back.

The threat of massive duties on billions of dollars of goods sent Shanghai stocks to their lowest level since September 2016, though it remained uncertain whether Trump would hold fire as part of a negotiating strategy.

The deadline to release the list comes as Washington faces a dizzying array of parallel diplomatic horse trading, as Trump is increasingly dependent on Beijing to help advance efforts at North Korean denuclearisation, while also using aggressive trade tactics on all major US economic partners.

The president&39;s trade team, including senior officials from the Commerce and Treasury departments, were due to gather Thursday at the White House to finalize the list of Chinese goods on the hit list.

READ: US and China agree to abandon trade war: Beijing

A report in the Wall Street Journal quoting sources close to the matter said Thursday evening the list had been approved and would affect about $50-billion (R672-billion) worth of goods, the same figure that was first announced in March.

China has pledged any tariffs will void progress made in recent trade talks between Beijing and Washington and has drawn up its own list of $50-billion in US goods to target.

"If the US side adopts unilateral protectionist measures and damages China&39;s interests, we will immediately react and take necessary measures to firmly safeguard our legitimate rights and interests," foreign ministry spokesman Geng Shuang said in Beijing.

"All the results from the negotiations will not go into effect," Geng repeated.

Trump has frequently reversed course, threatening and then backing away, or vice versa, but he has appeared determined to take a hard line with Beijing.

"What we&39;re seeing here is a bargaining process in which the Trump team has found that by continuing to put pressure on China, the offers have become better and better," said Dennis Wilder, head of a Georgetown University program on US-China relations.

"My guess is that the Trump administration will announce but not implement. They want to give the Chinese a little more time," the former senior CIA official for East Asia told AFP.

The confrontation with China began in March when Trump announced 25 percent tariffs on about $50-billion in Chinese goods to punish the country against the theft and forced transfer of American technologies and know-how.

China immediately threatened to retaliate on $50 billion in US goods, so Trump upped the ante, vowing to hit another $100 billion of goods.

A preliminary list of about 1,300 Chinese export goods was released in April by US Trade Representative Robert Lighthizer, with about 70 percent of the goods coming from categories covering nuclear reactors, electrical machinery and optical equipment.

However, the list was due to be trimmed after a public comment period to reduce the negative impact on US companies and consumers, so the final total is not confirmed. CNBC reported Thursday Trump officials planned to winnow that list to between 800 and 900 goods.

It was also unclear when the tariffs would take effect. The White House said last month the final list would be unveiled on June 15, with the duties to be imposed "shortly thereafter."

Analysts say that repeated about-faces and turmoil among US officials during trade talks have left Chinese officials unsure of Trump&39;s goals or which of the several senior emissaries from Trump&39;s Cabinet actually has the power to seal a deal.

READ: US trade chief to give China 60-day tariff notice

"I think the Chinese have been mystified by what the administration wants," said Nicholas Lardy, an expert on the Chinese economy at the Peterson Institute for International Economics.

Trump has moved to save the Chinese telecommunications giant ZTE from US sanctions imposed in April that brought it the verge of collapse, sparking outrage from congressional Republicans.

Last month the White House effectively declared a truce in the trade hostilities with China, before deciding weeks later to press ahead with tariffs.

Analysts say the tariffs that Washington is preparing are a pittance when compared to the size of the world&39;s two largest economies -- limiting their power to bend Beijing to Trump&39;s will.

But others worry about the sign it sends, and the potential to damage the world economy.

Trump faces competing objectives in pursuing a North Korean deal while seeking comprehensive economic concessions from China, which might loosen economic pressure on Pyongyang if Washington presses too far.

"We&39;re asking them to completely change who they are and we&39;re shaking this little stick in front of them," said Derek Scissors, an expert on the Chinese economy at the American Enterprise Institute.