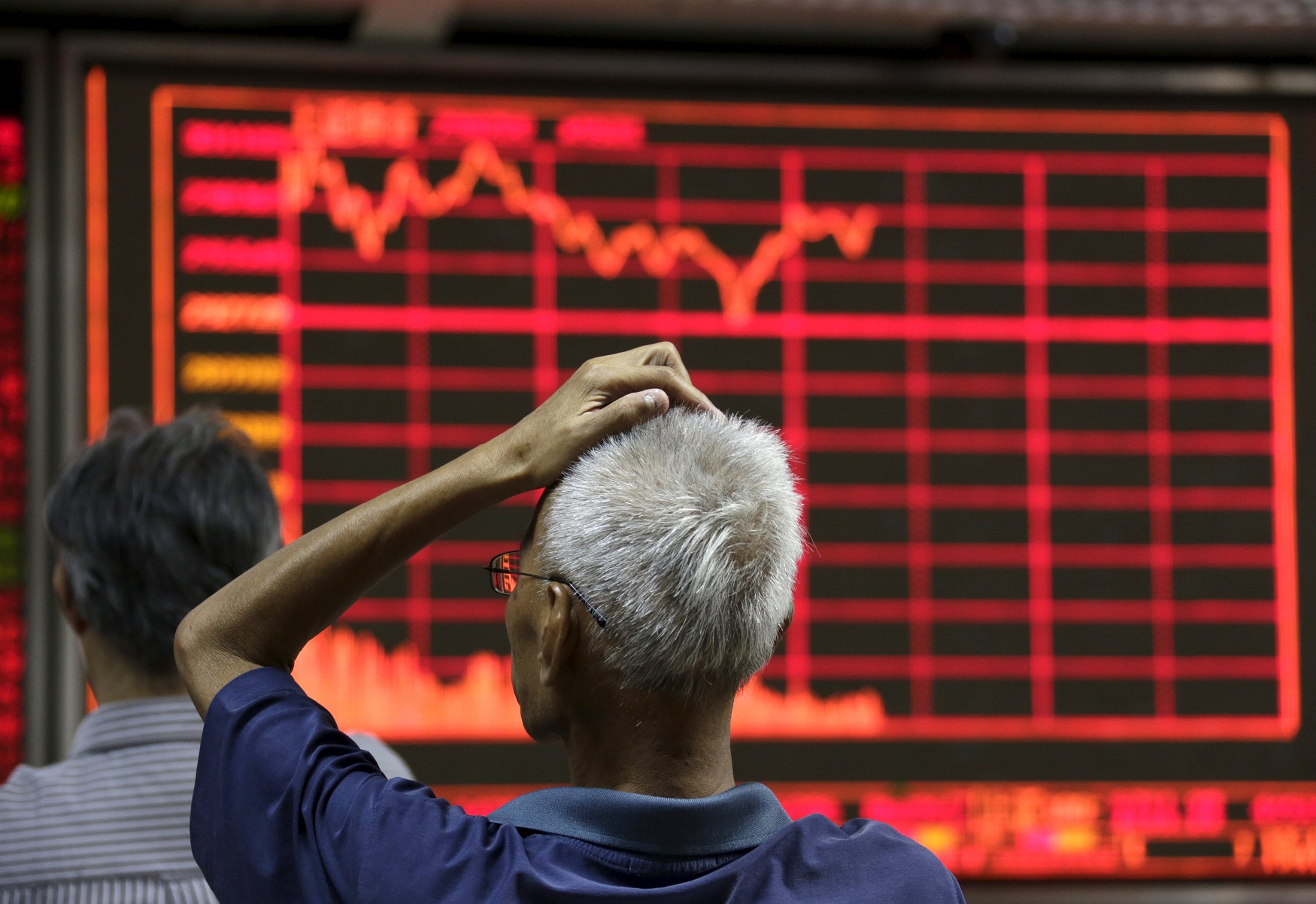 An investor looks at an electronic board showing stock information at a brokerage house in Beijing, August 27, 2015. China's turbulent stock markets rose on Thursday, helped by a strong rebound on Wall Street.

German and Italian equities shed 3 percent in afternoon trading as Wall Street opened to losses of two percent at the end of another troubled week for global markets that was driven by plunging crude oil and Chinese slowdown concerns.

Shanghai was the worst performer in Asia on Friday, losing 3.6 percent and entering an official bear market -- a term defined as a 20-percent fall from a recent high. The loss topped off a rollercoaster week as a better-than-expected reading on Chinese trade failed to eradicate heightened worries about the health of Asia&39;s powerhouse economy.

Paris also motored lower on fears that French automaker Renault could be engulfed by an emissions scandal that has plagued German rival Volkswagen, dealers said.

World oil prices spiralled lower as traders readied for the return of Iranian crude in a market already awash with supplies.

"European markets slumped on the final day of a rough first two weeks of the year," said CMC Markets analyst Jasper Lawler. "Oil plunging back below $30 per barrel and the Shanghai Composite back into bear market territory is fuelling risk-off attitudes."

&39;Everybody wants to know whether Renault is cheating&39;

Back in Paris, shares in Renault and other car companies skidded lower once again.

Renault had slumped by more than 20 percent during Thursday&39;s session after unions reported that anti-fraud investigators had raided several of the company&39;s sites, possibly looking for emissions-cheating devices on diesel engines, before closing about 10 percent lower.

In afternoon trading on Friday, Renault shares were down 5.4 percent at 73.56 euros on the Paris stock exchange.

"Everybody wants to know whether Renault is cheating," brokers Aurel BCG said.

"The stock exchange context and the painful memories of the VW scandal have prompted investors to massively sell the stock," they added, noting that French government ministers had been trying to "put out the fire".

The French government has a vested interest in Renault&39;s fortunes, owning a 19.7 percent stake in the carmaker.

Shares in Peugeot, France&39;s biggest automaker ahead of Renault, fell 3.3 percent in Paris, and Renault alliance partner Nissan&39;s stock closed 1.9 percent lower in Tokyo. Shares in BMW and Daimler were down around 3 percent, and Volksagen 4.6 percent in Frankfurt.

Most Asian bourses ticked cautiously higher on Friday before going into reverse, rocked by the latest dizzying plunge in oil prices.

US stocks tumbled by two percent at the open, with data that showed US retail sales fell 0.1 percent in December to cap the slowest year of growth since 2009, adding to oil worries.

Oil has dived by about three quarters over the past 18 months due to weak demand, a slowing global economy and a vast worldwide supply glut.