Zimbabwe to print local 'US dollar' as cash crunch bites 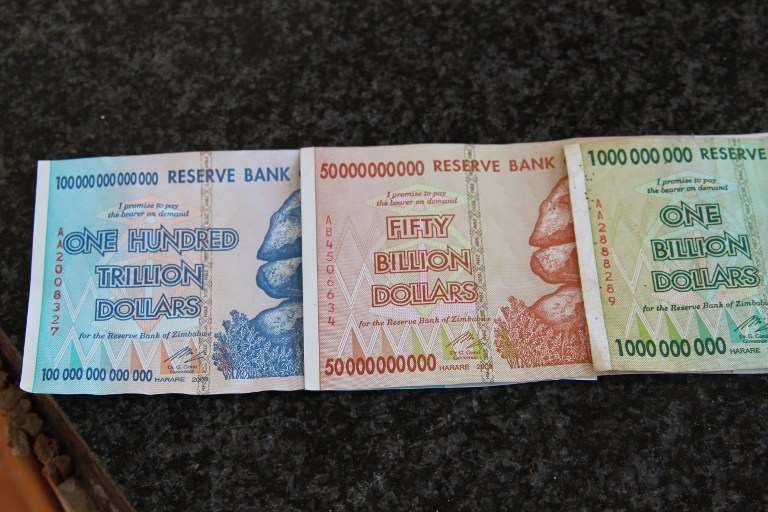 Banknotes from Zimbabwe with a face value of up to one hundred trillion Zimbabwean dollars have been laid out on a table in Johannesburg, South Africa, 01 October 2015.

HARARE - Zimbabweans formed long queues outside banks on Thursday as a cash shortage prompted the government to announce plans to print a local version of the US dollar and limit withdrawals.

The government adopted US and South African currencies in 2009 after hyperinflation -- which peaked at 231 million percent -- rendered the national currency unusable as the country&39;s economy collapsed.

A recent shortage of foreign notes led Reserve Bank Governor John Mangudya to unveil a raft of radical measures on Wednesday, including limiting withdrawals to $1,000 or 20,000 South African rand per day.

Mangudya said that the central bank would also print its own dollar-equivalent bond notes -- "which are currently at the design stage" -- to ease the cash crunch.

Mangudya denied the new banknotes were a step towards re-introducing the tarnished Zimbabwe dollar, but the plan was still criticised by some experts.

"This is extremely damaging to the interests of everyone and very dangerous to the economy," independent economist John Robertson told AFP in Harare.

"It won&39;t be long before this becomes another inflation story. People will refuse to be paid their wages in bond notes.

"Shops will not accept them as they cannot be used to restock (from abroad). I am hoping that the government can be talked out of it."

Bond coins were introduced in Zimbabwe in 2014 to tackle the problem of small change.

They will be backed by a $200-million support facility provided by Afreximbank (Africa Export-Import Bank), the government said.

"This does not signal the reintroduction of the Zimbabwe currency," Mangudya said.

"The fundamentals are not yet right for its comeback. This is just a measure to curb illicit flows out of the country."

Economists blame the cash shortage on a trade deficit which saw the country&39;s import bills standing at $490 million in the first quarter against $167 million in exports.

Apart from limits on withdrawals, the amount of cash that can be taken out of the country per trip has been cut from $5,000 to $1,000.

In the queues outside the banks, tempers were running high.

"I am supposed to be at work but here I am queueing since yesterday," said Monique Fore, 39, a bursar at a school in Harare.

"It&39;s becoming embarrassing explaining to my landlord that I can&39;t withdraw money to pay rent."

In some cases, banks have limited the amount that can be taken out to $200 -- well below the maximum set by the government.

Shadreck Mafukeni, a 57-year-old carpenter working for a furniture manufacturer, said his salary had been deposited in the bank on Tuesday but he had been unable to withdraw any money.

"I need to pay rent, my children&39;s school fees and I also need to repay debts to several people I owe money.

"I have used the little money I had at home on the bus fare. If I don&39;t get money today, I will walk back home."

Zimbabwe once removed 12 zeros from its battered currency at the height of hyper-inflation in 2009 when the largest note was the $100 trillion denomination.

State-sanctioned seizure of white-owned farms starting in 2000 left the agricultural sector in ruin, and triggered a sharp economic slowdown, with mass unemployment, emigration and many business closures.

President Robert Mugabe, 90, has ruled the country, which relies on imports for even basic commodities, since independence in 1980.