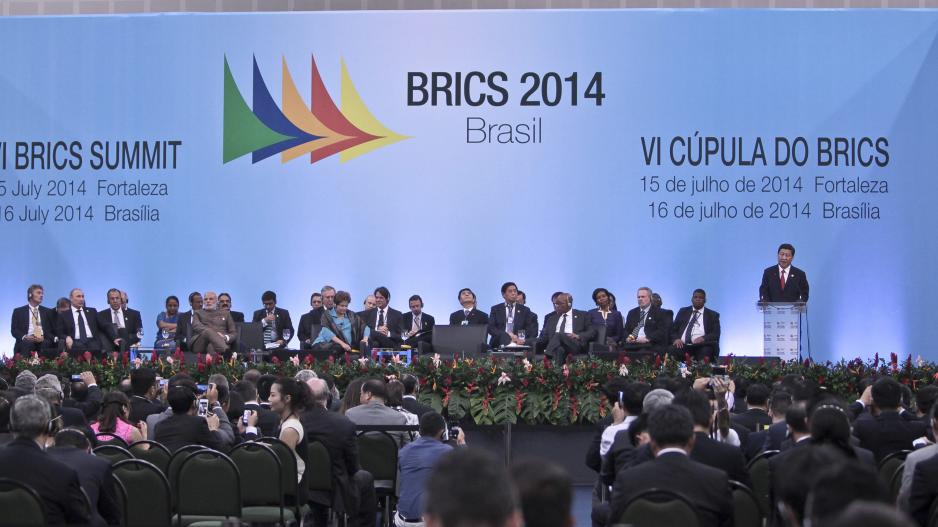 President of China Xi Jinping (R) speaks during the plenary session of the 6th Summit of the BRICS in Fortaleza, Brazil, 15 July 2014.

UFA, RUSSIA – South Africa’s President Jacob Zuma on Thursday sang the praises of fellow BRICS member states, recommitted the country to the group, and discussed the benefits of membership.

The president from the group’s smallest economy thanked his counterparts Vladimir Putin, Dilma Rousseff, Narendra Modi and Xi Jinping during a press statement and document-signing session at the 2015 BRICS/SCO (Shangai Cooperation Organisation) summit in Ufa, Russia.

Leaders of BRICS and Eurasian nations at Ufa. pic.twitter.com/oXf3AZrs0M

BRICS nations, according to Zuma, also needed to better cater for the approximately two-thirds of the world’s population who were without access to the internet.

He thanked his four counterparts for their “solidarity” in regards to the deaths of African migrants attempting to cross the Mediterranean.

He added that South Africa was open to “exchanges in regards to migration”.

Zuma thanked his Russian counterpart Putin for his leadership under which the BRICS’ New Development Bank (NDB) and the Contingent Reserve Arrangement (CRA) had been realised.

The NDB, which was launched on Tuesday, would have an initial authorised capital of $100 billion. The CRA would see the same amount in initial total committed resources.

Zuma went on to welcome the incoming BRICS president, India’s Prime Minister and called on academics, the private and public sector, youth, and media to continue strengthening ties between member states.

He concluded with congratulating South Africans Leslie Maasdorp and Tito Mboweni who were recently elected as one of four NDB vice-presidents and non-executive director, respectively.

The summit, which officially began on Wednesday was drawing to a close.

Zuma was expected to make a final announcement regarding the summit on Friday morning before departing from Ufa.