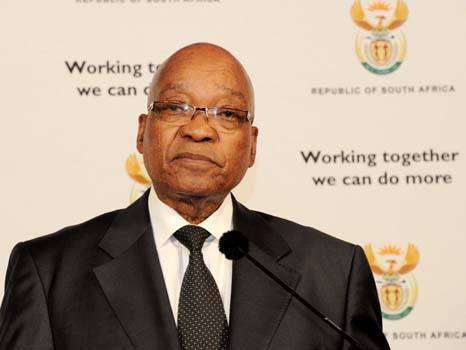 File: President Jacob Zuma will on Thursday address the first anniversary of the Progressive Professionals Forum in Midrand.

“We are aware that we have to create the enabling environment to give industry the comfort to invest in this capital-intensive sector,” he told reporters in Durban.

“We have to provide clarity and stability in the legislative framework governing offshore oil and gas, ensuring a win-win outcome for government, industry, and society.”

Mineral Resources Minister Ngoako Ramatlhodi asked Zuma to hold off on signing changes to the 2002 Mineral and Petroleum Resources Development Act into law pending a review by some ministries.

Exxon Mobil and Total SA are among those that have objected to it on the grounds that it’s too vague and will undermine their businesses.

Proposed changes to the act include giving the state the right to a free 20 percent stake in all new energy ventures and to buy an unspecified additional share at an “agreed price.” Exxon, Anadarko Petroleum Corp. and Royal Dutch Shell Plc have begun prospecting off South Africa’s coast as new technology boosts their ability to find and pump oil from deep beneath the seabed.

The nation may split rules for the oil and gas industry from the amended mining laws should the government find that the regulations are at odds with the constitution, Ramatlhodi said on October 8. It can only be referred back to Parliament if it is constitutionality in doubt, even if the government is concerned that some of the proposed policy changes are inappropriate, said Ramatlhodi, who was appointed in May.

The country is also preparing draft regulations on oil and gas exploration that companies will be able to comment on, he said in July.

“We are waiting for the president to sign the mineral resources act and if he does, we are exploring whether the 20 percent free carry that will go to government from exploration profits should be outlined in the bill or the regulations,” Ramatlhodi said today. “I am looking at the process of the amendment of the minerals bill related to the oil and gas exploration to be completed by early next year.”

South Africa’s coast and adjoining waters have possible resources of as many as 9 billion barrels of oil, enough to meet 40 years of local consumption needs, Zuma said. It also has 11 billion barrels oil equivalent natural gas, or sufficient to meet 375 years of current domestic demand. He said there is uncertainty about the extent of the resources.

“We have to build a one-stop shop within the Department of Mineral Resources to streamline and regulate the licensing process for offshore oil and gas exploration and production,” he said.