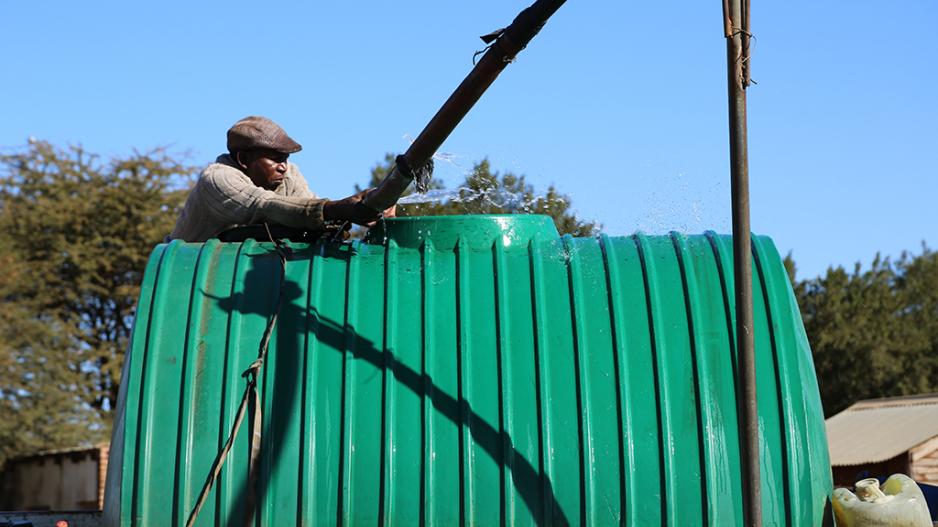 This tap is the only source of water in the Ledig village near Rustenburg. Jojo tanks which service the area are filled here along with water drums for individual residents.

RUSTENBURG - “We’re tired of begging for water.”
Residents of the Ledig community near Rustenburg are among those affected by South Africa&39;s water woes. Residents say they are known as those who are constantly begging for water.
They have been waiting for over a decade for a decent, regular water supply and have been promised piped water and a reservoir several times.
The village of Ledig is just a stones throw away from Sun City – which has a manmade Valley of Waves and piped water throughout the expansive luxury estate.
Yet residents of Ledig say they are forced to drink water which makes their children sick.
A single pipe supplies most parts of Ledig. Residents who have enough money for large tanks fill them up and store water at home for cooking, cleaning and laundry.
But most in the area are poor and can only afford 5L drums bottles which are filled daily.
Some parts of the community have large green tanks where they collect water, however residents say the tanks are dirty and are not cleaned regularly.
“This water has things in it. It isn’t good water. This water is not the same as other water,” said Ledig resident William Tselane.
Tselane says he’s been ill several times as a result of the poor quality of the water supplied to residents.
Tselane says he and other residents have complained several times about the water issue, but get little help from municipal staff.
*Watch what Ledig residents had to say about their water issues
Moses Kotane Municipality spokeswoman Beauty Makganye says the water supply issues are not limited to Ledig.
Makganye says the Pilanesburg, Ramokoka and Mabeskraal areas also experience interruptions in supply as a result of "high demand as a result of population growth.
"However, plans are currently in swing to upgrade sources of water to affected areas," she said.
Makganye said the Department of Water Affairs was helping to upgrade the Vaalkop Dam, and a reservoir was being designed to "complement water supply".
"It is anticipated that challenges relating to water supply shortages will be resolved after the completion of Phase 1 of the Pilanesberg Bulk Water Supply Scheme Project," she said.
Meanwhile, aging infrastructure, lack of skills and a growing population in big cities are just some of the problems threatening water security in South Africa.
That is according to the Municipal Benchmarking Initiative (MBI), which is a partnership between The South African Local Government Association (Salga) in partnership with the Water Research Commission (WRC) and the Municipal Engineering of Southern Africa (IMESA).
It aims to help municipalities to comply with standards of providing water to communities and says a combination of factors is to blame for water problems, especially in local and district municipalities where aging infrastructure is just one issue.
“The difficulty is that we are unable in some respects to really attract the appropriate skills –engineering skills to be able to operate this particular systems,” said Salga’s William Moraka.
But also of great concern is the looming water shortages in the country but the MBI says measures are being put in place to avoid a crisis.
“More new dams are coming and because this is a challenge that we are experiencing as a country in its totality. We are aware of the fact that there is going to be a shortage of water in general at some point,” said Salga NEC member Pinky Moloi.
The benchmarking of water services will work on six pillars of water conservation and demand management, human resources and skills development, service delivery and backlog eradication, operational management and maintenance, product quality and financial management.
But with over 270 municipalities across the country, it might be a long time before communities like Ledig can have clean running water as part of their daily life.