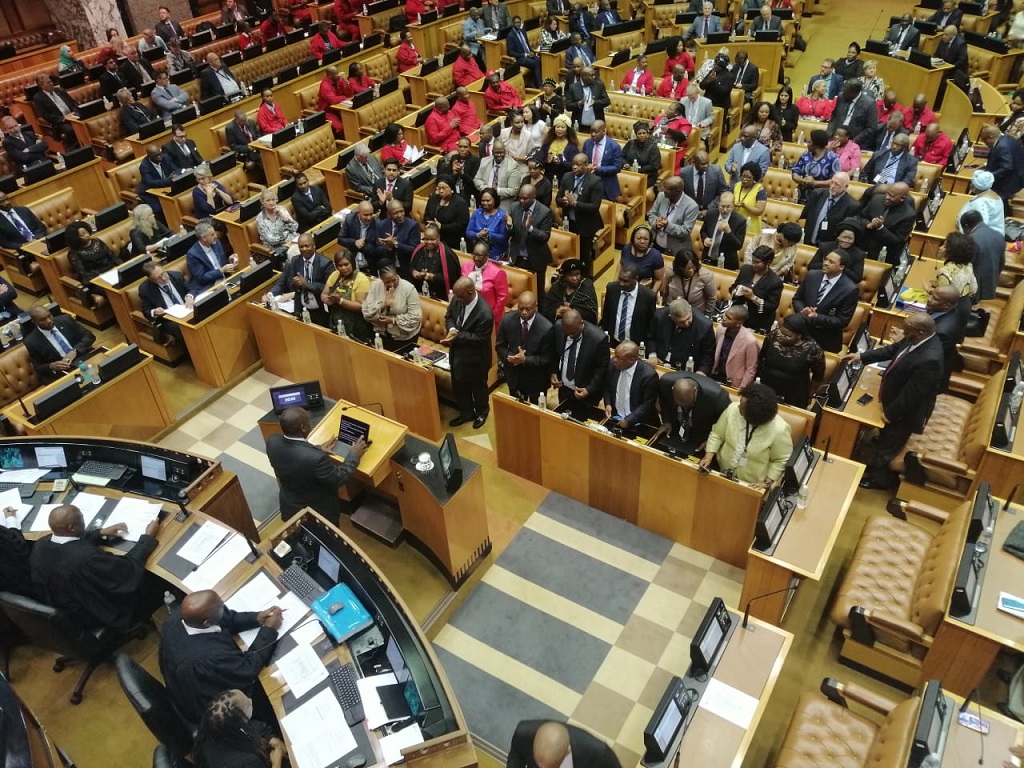 File: President Cyril Ramaphosa will deliver the state of the nation address in Parliament.

These are only 10 of the moments that have garnered the most views in the last few years but if you can remember any, leave them in the comments below.

President Cyril Ramaphosa was officially sworn in by the Chief Justice Mogoeng Mogoeng on Thursday, 15 February 2018, the day after the resignation of former president Jacob Zuma.

Ramaphosa narrowly won the vote to become head of the ANC after a bruising race that exposed rifts within the governing party and triggered a sequence of events the former-president is still addressing in court.

Ndlozi insisted the so-called racial unity experienced across the country is just a farce.

He said the Springboks will never symbolise unity as the team is not inclusive.

EFF commander in chief, Julius Malema fulfilled his promise to vosho to the podium on Wednesday. Courtesy of #DSTV403

The Economic Freedom Fighters showed their willingness to put their knees on the line for the South African people in May 2019.

The political party, led by their commander-in-chief Julius Malema threw down multiple voshos while singing before entering Parliament for the official swearing-in ceremony.

After months of campaigning, days of voting and counting, the seat allocation of South Africa’s sixth democratic elections were announced.

The ANC retained its majority in the National Assembly with 230 seats.

However, the governing party shed 19 seats from the previous parliament.

The Democratic Alliance continued in its role as the official opposition with 84 seats, with a decline of five seats.

The Economic Freedom Fighters were one of the biggest gainers of the 2019 election. The Red Berets increased their 25 seats in the National Assembly to 44.

Noah received great applause from Members of Parliament as Ramaphosa introduced him to the National Assembly.

The comedian called the meeting "one of the most surreal moments" of his life.

The Economic Freedom Fighters staged a walkout in the National Assembly just before Public Enterprises Minister Pravin Gordhan began speaking at the State of the Nation Address debate.

EFF leader Julius Malema labelled Gordhan a 'constitutional delinquent' and demanded he not be allowed to speak.

The Red Berets returned soon after Gordhan concluded his speech.

The Khoisan praise singer Bradley van Sitters was accused of speaking gibberish during State of the Nation Address in Parliament.

Some critics said Van Sitters should have had a translator.

Annette Vorster from the Khoisan Royal Council said van Sitters was speaking the Nama language, which is spoken by people from the Namaqualand, Northern Cape and Namibia.

Mboweni promised controls on the fiscal management of SOEs, cuts to the public service wage bill and opened the discussion of the privatisation of failing state-owned enterprises but the audience would be forgiven for mainly remembering the plant.

When Regina Mohlomi retired from her position as the first female parliamentary serjeant-at-arms she had a few choice words for MPs from a particular political party that garnered a lot of attention.

Let's make sense of why almost ten former ministers were not willing to continue serving as ordinary Members of Parliament. Courtesy #DStv403

Three of the former ministers were of retirement age and chose to resign to affect their retirements.