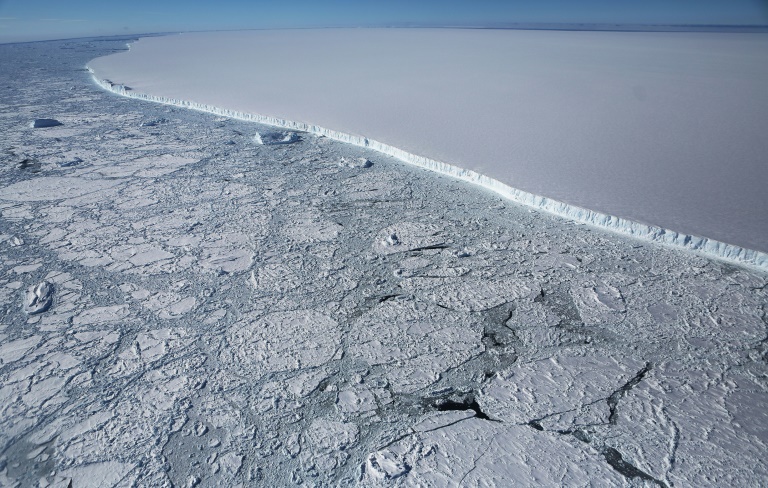 Since 1993, melting land ice has contributed to at least half of global sea level rise. AFP/Mario Tama/Getty Images

PARIS - Limiting global warming to 1.5 degrees Celsius could halve how much sea levels rise due to melting ice sheets this century, according to a major new study modelling how Earth's frozen spaces will respond to ever-increasing greenhouse gas emissions.

Since 1993, melting land ice has contributed to at least half of global sea-level rise and scientists have previously warned that the vast ice sheets of Antarctica were disappearing faster than worst-case scenarios.

An international team of more than 50 climate scientists combined hundreds of melt simulations of the Antarctica and Greenland ice sheets, which contain enough frozen water to raise the world's seas some 65 metres (213 feet).

They also included melt modelling from Earth's more than 220,000 glaciers, which make up only one percent of ice on the planet but contribute as much as a fifth of sea-level rise.

The team analysed the models to come up with probability estimates of how much melting ice would raise oceans under a variety of emissions pathways.

They found that if mankind successfully limited warming to 1.5C -- the goal set down in the Paris climate deal -- it could halve ice's contribution to sea-level rise by 2100.

This is compared with the roughly 3C of warming Earth would undergo if countries' current emissions-cutting pledges played out.

"But we could halve that contribution from ice melting if we limit warming to 1.5C degrees, relative to current pledges." 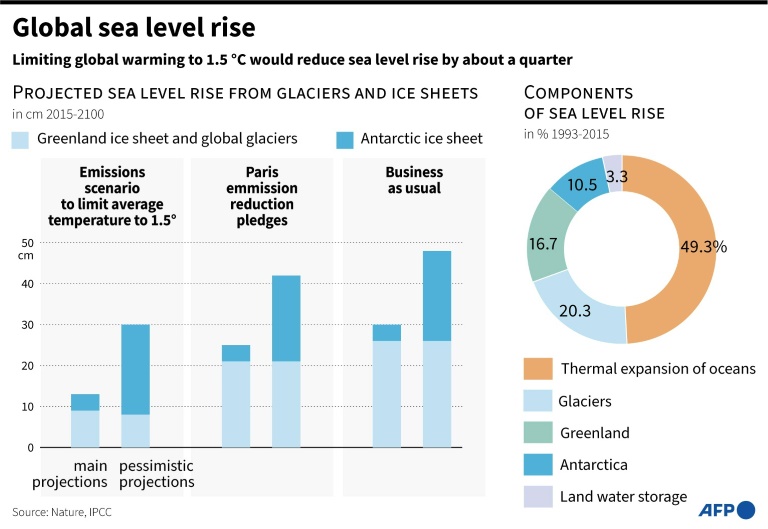 The study, published in the journal Nature, found that the average contribution to sea-level rise from melting ice at 1.5C was 13 centimetres by 2100, compared to the 25 centimetres currently projected.

The analysis showed that sea-level rise attributed to the Greenland ice sheet would fall 70 percent if the 1.5-C target was met, and land-based glaciers' contribution would roughly halve.

However, the projections were less clear and varied widely when it came to Antarctica.

Co-author Sophie Nowicki, from the NASA Goddard Flight Center, said the uncertainty in the models was largely down to what extent increased snowfall across a warming continent would offset melting from the ice shelves.

"Greenland is really sensitive to atmospheric changes, and so in a warmer world you get more melting on the surface of the ice sheets," said Nowicki.

"In Antarctica it is very complex. A warmer world could mean more snowfall, but it could also mean more melt at the side of the ice sheet."

The calculations showed a 95 percent chance that Antarctica would contribute less than 56 centimetres to sea-level rise by 2100.

But under a "pessimistic scenario", the study showed, Antarctica could raise global oceans by more than that even if humanity manages to cap warming at 1.5C.

A second study, also published Wednesday in Nature, found that limiting warming to 2C above industrial levels was likely to maintain the current rate of ice melt in Antarctica.

However, if current emissions-cutting pledges are not intensified by 2060, the models showed that the continent could contribute half a centimetre to sea levels every year by 2100.

Furthermore, the study warned that if emissions continued at their current levels, a tipping point would be reached around 2060 which would lead to Antarctic melt that would be "irreversible on multi-century timescales".

The research, led by a team from the University of Massachusetts Amherst, modelled how the ice shelves that keep the Antarctic ice sheet from collapsing into the sea were likely to respond to temperature changes this century.

With greater warming, the ice shelves thin and become more fragile, the models showed, risking accelerated melt from the ice sheet, as well as "calving", which is when large chunks of ice break off into the sea, as has happened already in parts of the Arctic.

"If the world continues to warm, the huge glaciers on Antarctica might begin behaving like their smaller counterparts on Greenland, which would be disastrous in terms of sea-level rise," said lead author Rob DeConto.