39 bodies found in a refrigerated truck 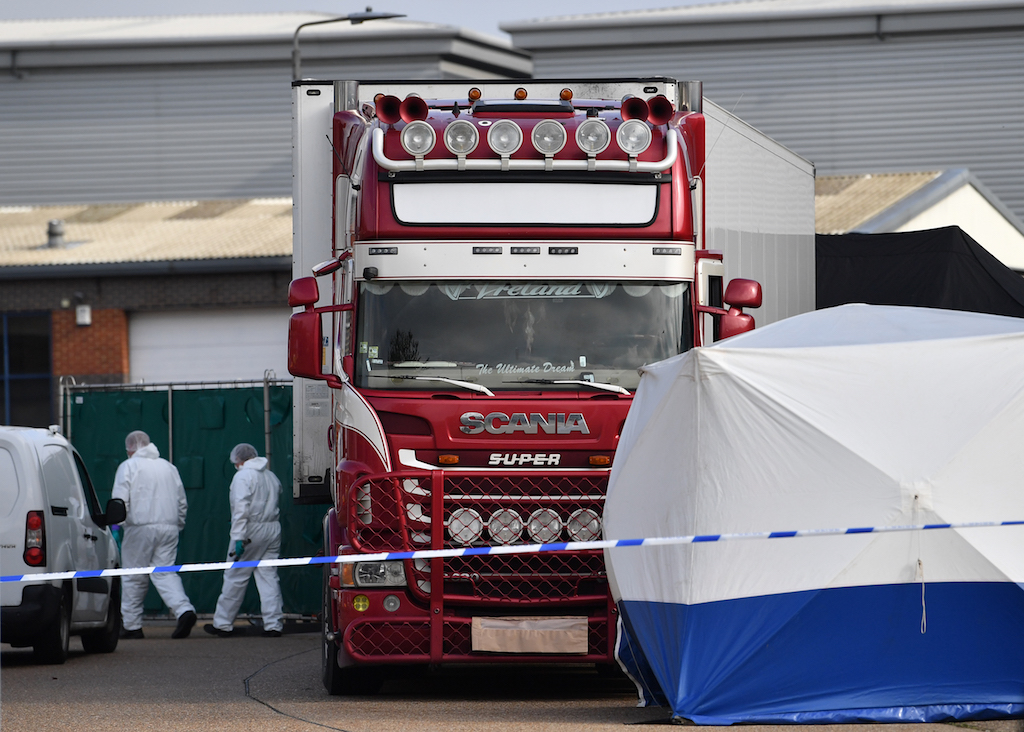 Police officers in forensic suits are photographed at the scene with a lorry, believed to have originated from Bulgaria, and found to be containing 39 dead bodies, inside a police cordon after being discovered at Waterglade Industrial Park in Grays, east of London, on October 23, 2019.

UNITED KINGDOM - Britain launched a major murder investigation after 39 dead bodies were found Wednesday in a refrigerated truck, once again putting the spotlight on the shadowy people trafficking business.

The corpses were found in the truck container at an industrial park in Grays, east of London, triggering outrage among politicians.

The local Essex Police force, which is working with immigration officials, said their initial priority was to try to identify the victims, thought at this stage to be 38 adults and one teenager.

The truck driver, a 25-year-old man from Northern Ireland, has been arrested on suspicion of murder.

"This is an unimaginable tragedy and truly heart-breaking," Prime Minister Boris Johnson said.

He said the perpetrators of people smuggling, trading in human lives, "should be hunted down and brought to justice".

Police were called to the scene at the Waterglade Industrial Park at around 1:40am (0040 GMT).

Officers in white forensic suits could be seen working by the truck and a white tent was erected outside.

"We are in the process of identifying the victims. However I anticipate that this could be a lengthy process," said Essex Police chief superintendent Andrew Mariner.

"We have arrested the lorry driver in connection with the incident, who remains in police custody."

Police said the truck had come by ferry from the Belgian port of Zeebrugge into Purfleet, close to Grays on the River Thames estuary -- a crossing that takes nine to 12 hours.

But the country's Prime Minister Boyko Borisov said it had "no connection" to the country except for having Bulgarian licence plates.

"The truck was registered in 2017 by an Irish citizen, it left Bulgaria then and has not entered our country's territory ever since," he told national television.

Dimitar Dimitrov, executive director of the Bulgarian Chamber of Road Hauliers, told AFP many foreign hauliers registered in Bulgaria for financial reasons, and doubted whether a Bulgarian firm would employ Irish drivers.

Britain's National Crime Agency said the number of migrants being smuggled into the UK in containers and trucks had risen in the last year.

In May the NCA said there had been "increasing use of higher risk methods of clandestine entry" to Britain by organised immigration crime gangs.

"To put 39 people into a locked metal container shows a contempt for human life that is evil," she said.

In 2000, the bodies of 58 clandestine Chinese immigrants were discovered in a Dutch truck at the southeastern English port of Dover. Two people survived.

In 2014, some 34 Afghan Sikhs were found inside a shipping container at Tilbury port -- next to Grays -- suffering from severe dehydration, hypothermia and lack of air. One man was found dead, having passed away during the sea crossing from Belgium.

In August 2015, at the peak of Europe's migration crisis, the bodies of 71 migrants including a baby girl were found piled up in the back of a poultry refrigerator lorry left in Austria.

Investigations later revealed they had been transported along the Balkan migrant route and left to suffocate in the back of the truck after the driver dumped the vehicle near the Hungarian border.